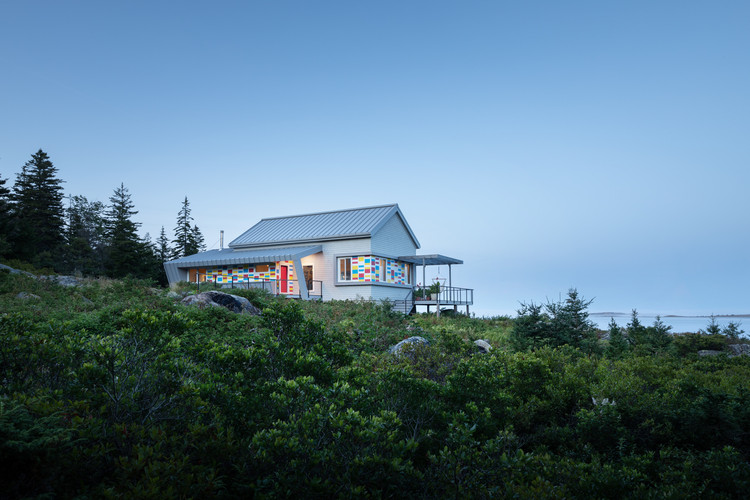 Text description provided by the architects. Mike and Ellen Fedosh are a couple of keen solar eclipse chasers; they have traveled the world to destinations like Svalbard, Libya & Cook Islands and have seen a total of 10 of these rare astronomical events. Like modern-day Indiana Jones, this hobby has shaped Mike and Ellen’s personal aesthetic, largely in part to the collection of local art that they have acquired from various cultures along the way. A common thread, that is obviously not only through their art but their personal style, is that Mike and Ellen embrace color. When talking with Mike, he’ll be quick to tell you that, simply put, color brings him joy. It is easy to believe as he’s telling you this while wearing a blue Hawaiian shirt, Panama hat, and sunglasses.

The juxtaposition of this man against the backdrop of natural coastal Maine makes his vibrance blinding. Ten years ago, Mike and Ellen, purchased a plot of land on a remote island off the coast of Maine, called Isle Au Haut, on which to build their dream home. It is inhabited by a small community of 75 individuals, mostly lobster fishermen. With an extensive list of colorful worldly locales in their repertoire to choose from, coastal Maine seems like an odd place to choose to settle. It is a personal connection that has pulled Mike back to this island. Isle Au Haut played host to his family for years serving as a backdrop for camping vacations, hiking trips and stays in the local lighthouse bed & breakfast.

Not a year went by when the Fedosh family didn’t visit the island; now the island is where Mike and Ellen have built their home. Mike called upon his son, Noel, an architect in Los Angeles, to design this home for him. What better a person to unlock the vision of this eccentric man than his own son. Luckily for Noel, he knew of his Dad’s affinity for color. Having grown up in a multi‐colored house, the choice was to either embrace color intrinsically in the design of the house, or Mike would find a way to force it in after the fact. Noel chose the former.

The challenge in using color is that the local New England saltbox typology uses a more natural, muted palette. Mike and Ellen’s aesthetic would easier fit in Miami or the Caribbean. Noel looked towards the island’s inhabitants for inspiration. The local fishermen collect their buoys from the ocean, each marked with a unique sequence of colors, and hang them on the side of their houses when they are not being used. This creates a colorful patchwork covering the sides of most of the island’s homes. This became the story for the architecture; the design emerged from a concept that is derived from a truly site‐specific island typology. The house is both in contrast and complement to its remote island site. 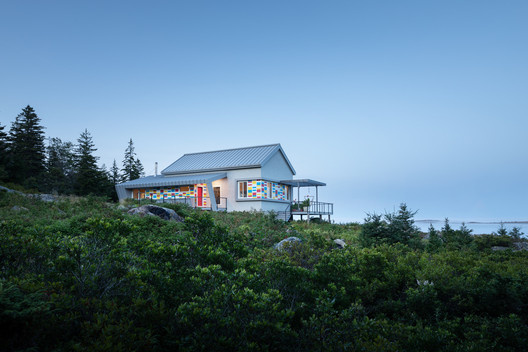