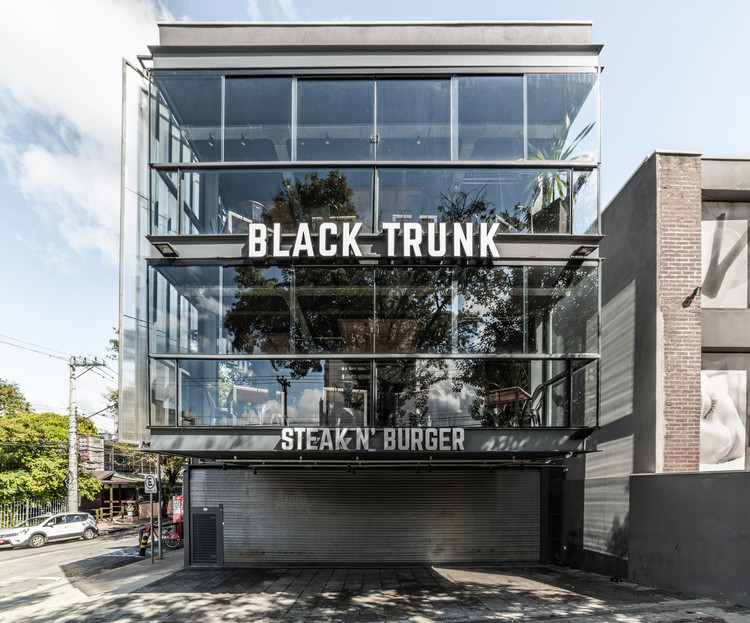 Text description provided by the architects. The Purpurina building was built in Vila Madalena, São Paulo, a bohemian neighborhood currently undergoing a process of intense transformation. Even though it is located in a street corner and has a great location in the neighborhood, the building’s plot is difficult to occupy due to its reduced dimensions. Betting on the plot’s potential, the owner asked for a flexible building, and after its completion, it was occupied by a fast casual hamburger restaurant and bar with a surf theme.

After a thorough study of the surroundings, it was established that the street corner, where the plot was completely walled off, would be free of any obstacles and open for pedestrians to traverse. To offset any prejudices to the constructive potential of the plot, the choice was made to make the levels above the ground floor cantilever over this open area. The steel structure became then an obvious choice, with the added benefits of being quickly built and having a memorable aesthetic result. Highlighting the structure and constructive methods, glass was chosen as the main material for the facades as well as precast concrete panels for the slabs.

As a response to the solar orientation of the side elevation, a brise soleil system was designed using reflective polycarbonate panels and steel framing. These elements not only protect the interior spaces from the afternoon sun, they also have a dynamic visual effect on the facade, reflecting the sun light during the day and transforming the building into an immense lantern during the night. Rounding off the industrial aesthetic, the ground floor has a big roll-up metal door on one side and up-and-over metal panels on the other.

After negotiating with the neighbors, the wall dividing both plots on the frontal setback was removed, making the new building visible to cars and pedestrians coming down Purpurina Street and completely changing the visual experience for this section of the sidewalk. Together with the choice to leave the section of the plot on the street corner free of obstacles, this transformed the intersection from a visually congested and cramped urban ambiance to an open and welcoming area in the neighborhood.

The staircase connecting the levels was designed to allow a visual connection between them, and as such is a very open and transparent steel frame structure topped by a big skylight that brings even more light to the interior spaces. As a result of being comfortable and welcoming, the use of the stairs is prioritized, leaving the use of the elevator to persons with disabilities, the elderly and parents with prams.  The building was awarded the grand prize for the 57th Annual Architects Awards of the Brazilian Institute of Architects – Rio de Janeiro. The jury was unanimous in its choice and praised the project for its spatial sensibility, structural clarity, flexibility and the way the finished building improves the urban quality of its surroundings by opening up the street corner. 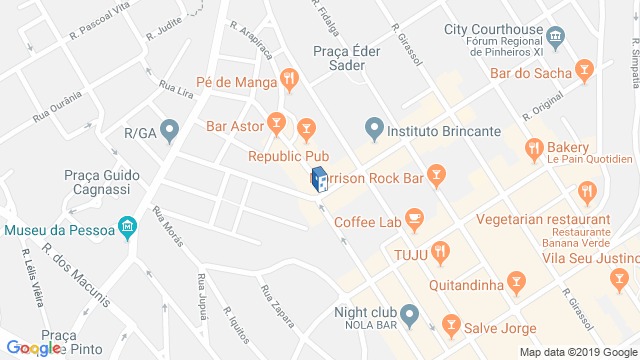