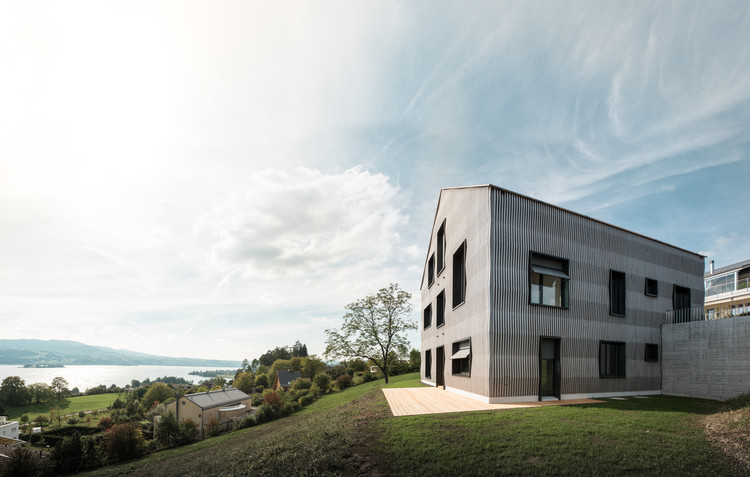 Text description provided by the architects. The site is enthroned on the slope above Rapperswil-Jona with breath-taking views of the castle, lake and mountains. Precisely positioned, the structure defines the edge of the slope, with a large sweep of space around the house that has become extremely scarce in such locations. The archetypal shape with a gabled roof forms an appropriate framework for the apartment house: three parties in one house, under one roof.

By separating the spatial from the load-bearing system, this design makes the structure tangible. Five V-shaped pairs of columns in the centre of the house carry all internal loads, enable vertical and horizontal load transfer, order the space and make the distribution of forces visible.

A composite slab of prefabricated concrete elements and in-situ concrete brings the necessary mass into the structure and distributes the loads between the outer walls, the stair core and the V-shaped supports. On each successive floor, the thickness of the supports is reduced by two centimetres as the load decreases. The apartments are determined by the central space, which is the arrival point and pivot. The loggia, fully glazed to create an internal extension, arranges living and dining areas with a view of the lake. The rooms and bathrooms are laterally oriented.

Because the room separation is detached from the supporting structure, each apartment has an individualised floor plan, organised by the central room. Sometimes this is the enclosed entrance hall, sometimes it flows over into the living and dining area. The gable introduces a vertical theme to the interior: while the penthouse extends from the jamb wall to the peak, the living room on the middle floor opens up vertically beyond that point, making the roof and the geometry of the house tangible. Generously proportioned rooms are thus created that negotiate the volume of the building among themselves. This sloping roof makes the apartment a house within a house.

Wood and concrete define the construction, inside as well as out. The interiors are clad with white-pigmented spruce. The oiled spruce V-supports, door and window frames create nuances and, in combination with the panel layout and shadow joints, define the interior spaces. The abundance of wood in the interior creates an inviting feel with its clear structure and warmth. The ceilings are ordered by the large prefabricated concrete elements.

The façade consists of a vertically organized, pre-weathered full-surface groove and comb formwork with attached cover strips. In order to subtly break the vertical arrangement and thus give the openings a hold, the visible edge of the cover strips jumps back and forth every 80 cm with a slight bend, creating a play of angles and shade. The large windows on the south façade frame individual views over the lake and give each room its own character. Space is a very finite resource. Careful handling is therefore more important than ever.

The compact structure of this house makes good use of the terrain to avoid unnecessary excavation and preserves the precious open spaces around it. The house has up-to-date insulation and relies on the use of a modern heat pump, while the compact volume and solar gain through the façade help to save energy. Wood from domestic forests is an unbeatable renewable resource, which is why Swiss wood was used for the construction. 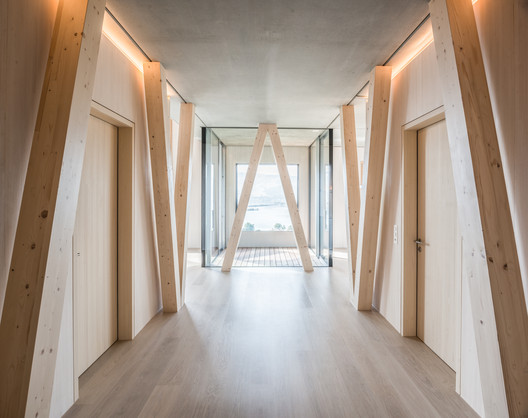 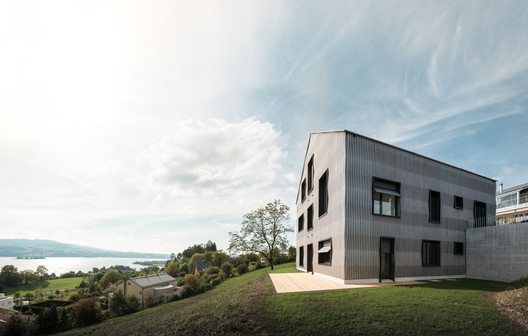