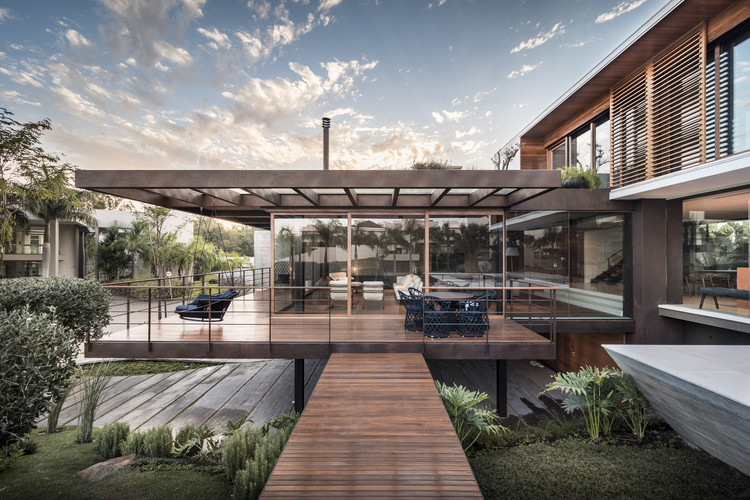 Text description provided by the architects. The Frame House is a single-family house located in Novo Hamburgo, Rio Grande do Sul, for a couple and their two children. The architectural parti is based on the total integration of the house, concerning its inside spaces and their relation with the outside spaces.

Another project principle was the optimization of the original profile of the land and its morphology. In order to respect it, the program was settled in a way that could allow the minimum possible of soil movement. A pre-tensioned flat slab and a meticulous landscape reinterpreted the car shelter, on the street level. From it, it is possible to access the entrance hall, which has the staircase and the elevator. On the upper floor, the living room, dining room and kitchen integrate with the terraces and pool generating a single and big living area. The rooms were arranged on the upper floor facing the south, with the best view, but with the sheds facing north. A strong project position is demonstrated by the use of wood, concrete and steel, in a controlled and legible way. The utilization of vivid colors in punctual elements, like the orange countertop of the kitchen and the blue dining table, contrast with the general monochrome.

The inspiration for the project of the Frame House gets back to the essence of the houses with balconies facing the street, with leisure spaces surrounding the house, like an invitation for the neighbors to build a relationship. The decks, that are distributed over the land slope, are the literal interpretation of this concept - between wood and steel structures, the set floats on the garden.