Located in Caesarea, A beach community in the middle of Israel. A single family house designed for a family of six. The house is based on an existing structure that was built in the early 80's and was part a trend to emulate the monumental Roman aqueduct in the architecture of the new emerging beach community villas.

Early on in the design processes we have decided to keep the sand stone arches and make them a central element in the house but keep them as a surprise from the outside. The surprise effect resulted in a generous entrance patio which also strengthen the flow between the garden and the indoor without compromising the privacy of the tenant's.

The semi-circle line of the stairs roof gives a hint to the arched curve wall and acts as a connector between the previous life of the house and its new incarnation. We decided to scale down from the exciting structure and use the left over square meter to create a seamless flow between the indoor and the outdoor.

Half of the old structure was demolished and a third was built to replace it. New concrete and steel canopies where introduced in on the south facing façade. A roof terrace which is accessible from the patio allows for magnificent sunset views of the beach and the Roman aqueduct. 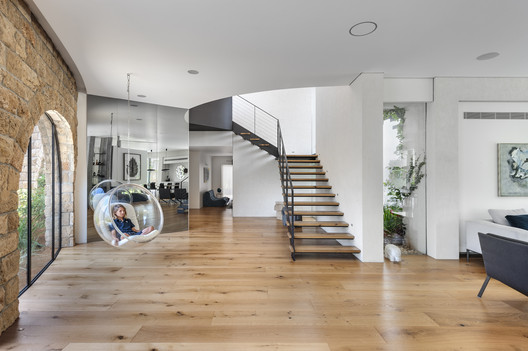