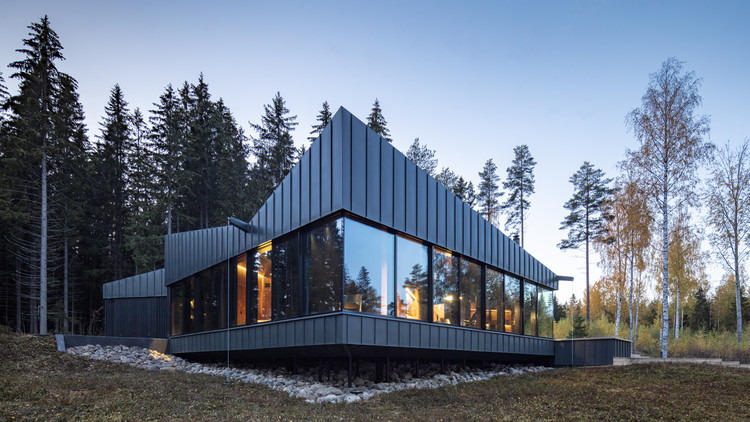 Text description provided by the architects. The building is approached from the south through a dense spruce forest, as the lake landscape slowly opens to the right on the east side. The spruce forest forms a natural and characteristic back wall for the construction site. It acts as a strong visual barrier along the western boundary of the plot, but also softens the place's otherwise open sound landscape and adds a gentle, dark tone to it. At the beginning of the design, the plot was almost treeless and only one maple tree had to be removed to make room for the building. The rhythmic line of birches by the shore is an essential feature for the landscape opening from the interior of the house, and it also provides privacy when viewing the building from the lake. The steep stone embankment of the shore is repeated with the paving stones of the lower part of the house. The exact location of the building was largely determined by the views. The more north you move on the plot, the more the lake landscape opens, on the other hand, the shortest distance to the shore was precisely determined. The old sauna by the shore had to be moved slightly in order to get the best view. Views have been sparingly opened towards the closest neighbor, located northwest, and towards the under-grown tree layer facing north, and the house is more enclosed in that direction. Instead of covering the large glass surfaces with interior curtains, a sun-blind was integrated into the outer surface of the wall structure, which does not allow heat radiation to enter but allows views to the landscape to be enjoyed from inside the house.

The building consists of three interlocking square masses. The locations of the spaces in different masses are strictly distributed according to the functions; the main mass contains the living, sleeping and dining areas, and the smaller ones have sauna and utility facilities, garage and technical facilities. The core of the main mass and the side masses are within the same coordinate system, which clarifies the connections between the spaces and calms the spatial experience. The basic idea behind the main mass is the core of the open square space, where all the fixtures are integrated and much of the functionality is located. The core has been shifted from the coordinate system of the main mass so that the use of the spaces between it and the outer walls could be optimized. The hallway, sleeping areas, entertainment corner, and study are located in caverns created within this spatial distribution. Inside the core are a utility room, toilets, and a walk-in closet. There is no traditional division into rooms, but spaces can be separated from one another by sliding doors if desired. The nature of the spaces varies greatly due to large glass surfaces and powerful openings to the landscape. The landscape itself is the most important element of the interior, which is alive and constantly changing according to the time of day and the seasons. On the lakeside, the floor height of the building is clearly higher than the surrounding terrain to give the impression of floating above the lake. Similarly, the atmosphere of the spruce forest can be sensed in the living area, located in the western corner of the house, which has been raised to the height of the forest brush. This side is rooted in the ground, and less natural light seeps into space so the experience is closer to that of the forest atmosphere.

Design at its various stages throughout the project has been executed in close collaboration with the client.  Experiences, atmosphere, materiality, nature of light and other starting points of the design were thought through and tuned well in advance of the actual design of the space. The design and construction schedule were extraordinarily long, which has resulted in a house that both designers and clients are very happy with - a relief after living with the hectic atmosphere of modern construction.

To quote the client, “each of the three previous personal construction projects I have undertaken felt purely physical. Not only construction but also the end result. This is the first building where it feels like something spiritual is involved.”

The exterior of the building is unambiguously distributed in terms of materials. The doors and windows are 2.3 meters high. Everything in this height all around the building is either glass or wood that has been oil painted black. All above and below this 2.3-meter-high zone is Rheinzink pre-patinated sheet zinc. The terraces and the stairs leading to the shore are made of larch. The interior material palette is also clear: the core, with all its surfaces and fixtures, is oiled walnut. Outside the core, the walls and ceilings, as well as the vertical structures, are black oil stained pine. The floor is made of black oil waxed oak parquet. The sauna and washrooms form a contrast to the dark main mass with paraffin-oiled alder on all surfaces. The shower has a ceramic tile that matches the wood.

The special atmosphere of the spaces is largely due to the use of natural light and the different gloss levels of naturally treated wood surfaces. The design of the building's spaces is not afraid of darkness but has turned it into a strength.  The building has places with a huge amount of light and places where you can curl up into the shadows. Always according to the situation and mood. The principle of artificial lighting has been to illuminate only where necessary, bringing light to where you need it most and creating a safe and cozy atmosphere. The light is centered on the walnut core, which glows like a warm element when viewed from the outside. Outside, mainly the walkways are illuminated, but also a few trees as focal points in order to make it easier to see outside when it is dark.

Special attention has been paid to detail in the design and particularly to the fact that a well-designed and executed minimalist detail does not scream with its existence but remains discreetly in the background. This calms and clarifies the site, creating the feeling that everything is comfortably under control and in place. A large number of details and e.g. molding-free construction has demanded extreme precision from the workers and thanks to their professional skills, the end result presents extraordinary harmony.

The building warms up with geothermal heat. It features underfloor heating and electrically heated windows. The garage and the wet rooms are built on a load-bearing slab, otherwise, the building has a wooden frame. The wooden frame walls, floors, and ceilings have wood fiber insulation, plastic has not been used in the structures.