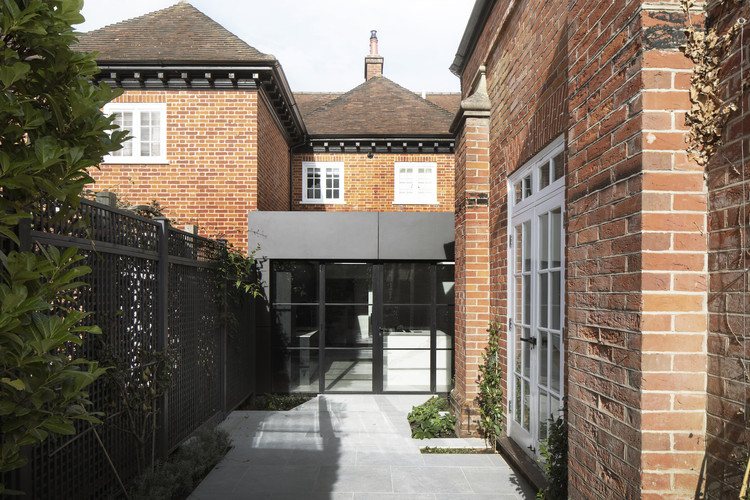 Text description provided by the architects. Triptych House is a Grade II Listed dwelling in Winchester, Hampshire. The property is one of a row of terraced dwellings that are annexed to a large 18th Century manor house. The property has a modest and unassuming appearance from the roadside. Prior to the renovation and extension, much of the interior of the property felt like a typical home. At the rear, there was a single-story conservatory-style extension housing the dining and kitchen spaces. This acted as an intermediary space between the main house and another two-story building in the garden, which was once an old billiards room.

Internally, this other building consisted of a large double-height space with a mezzanine floor and was currently used as the living space and office respectively. The client wanted to replace the conservatory with a new contemporary extension forming a modern kitchen/dining space as well as renovating and re-configuring the rest of the property. Although the property appeared small from the roadside, internally, it was in fact much larger. Rooms led through to other rooms and the property was in many ways like a ‘Tardis’.

We developed a concept that identified a journey through the three primary spaces within the house: master suite, kitchen/diner, and billiards room. These spaces were to be treated as a triptych artwork: three separate elements that are to be read and interpreted together as part of one overall piece. In the master bedroom, an original window was discovered in the attic space above. This discovery informed the decision to create a vaulted ceiling that would, in turn, expose the large timber trusses to the room. These new high ceilings and timber trusses echoed the existing qualities of the billiards room.

For the new extension, we saw the opportunity to create a contrasting space with lower ceilings, textured walls, and dark furnishings. We noted that all other rooms in the property were inherently inward-looking - in parts due to the small existing windows, as well as the largely suburban residential surroundings. The new extension was positioned to provide a key view out to a gate at the bottom of the garden, which gave this relatively small space unique qualities comparative to the other rooms. When dealing with existing buildings, we always look to enhance the inherent character of each space, rather than work against the architecture of the building.

We see our work as enabling each building to embody its underlying qualities and for each room to become more ‘itself’. Our interventions in the billiards room enhanced the light and airy properties. The existing mezzanine was adjusted and fitted with a new modern, industrial metal balustrade and stair that acts as a sculptural installation that juxtaposes against the more traditional, formal space. Internally, walls are re-configured to create an open, free-flowing feeling to the layout, whilst not sacrificing privacy and the interplay between different spaces. 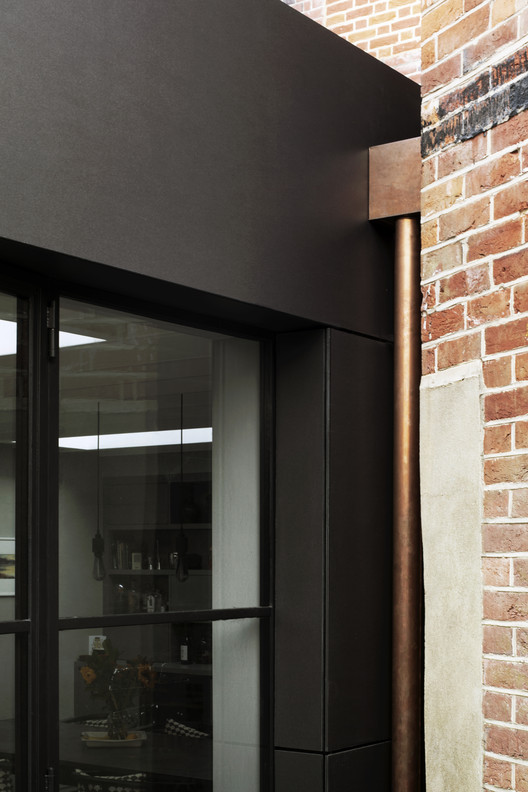