Save
Restaurant on the Cliff / Skyland Architecture 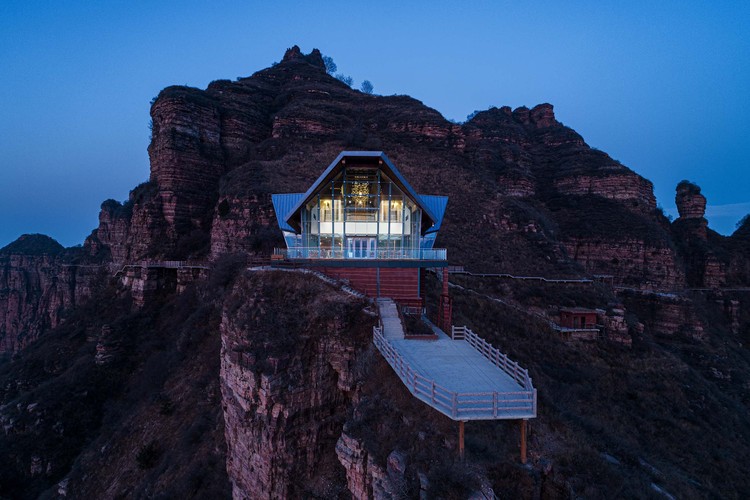 Text description provided by the architects. The project is located in the East Taihang Scenic Area, which is on the border of the North China Plain and the Loess Plateau in east of the Taihang Mountains. The geomorphology of the site is featured by the spectacular red sandstone landform. Almost all the routes in this scenic area are plank roads built along cliffs. It is a brand-new visual experience to walk among rare peaks and odd rocks at this height.

This project serves as the main catering service point on the boardwalk line, which located on a steep cliff, overlooking the vast mountains. The height difference is nearly 200 meters, which is extremely precipitous.

The prime consideration of the design is its impact upon the scenic area, because of the remarkable location. The original concept is the image of a goshawk who stands on the cliff–acting as the observer as well as the spotlight. Considering that the main facilities in the scenic area, such as cableways and glass plank roads are all modernistic or industrial styles, and that the scenic area itself is not the natural preservation zone, the Chinese traditional architectural form was not selected. Instead, we chose the image of the modernistic aircraft in combination with the characteristics of the scenic area, to form the contrast between man-made and natural, which echoes the majestic northern mountains and the rough red sandstone landscape. The cafeteria itself also echoes the cable station at the foot of mountain.

The plan of the project is a long cross form, to fit and emphasize the shape and orientation of the cliff. The gable roof was formed to create an uplift in the middle, presenting a taking-off position from the cliff. The main ridge is in fact a semi-permeable metal grille, which covers the flat skylight below, and softens the building's outline, like fins.

The building is steel structured, which enclosed by titanium zinc roof and glass curtain wall. Solid wood is used in interior and furniture design, to balance the coldness of the metal and glass outside.

Construction work on the top of the mountain was challenging. Neither could large machinery be transported up to the mountain, nor could large-size materials. In this case, only small-sized glass and steel was available for ropeway transportation. Even so, the damage rate of glass was staggering. Site excavation and foundation construction was complicated; therefore, the basement design has been completely renewed based on the actual situation after the excavation.

Despite modernistic architectural language been used, the siting of the project is based on the aesthetics of traditional Chinese landscape painting. As Zong Baihua said: “Chinese people always have great passion for setting up pavilion in the mountains... The mountains are lush and the woods are rich, in which stands the pavilion, graceful and light, breathing in the cloud.” This is the fundamental concept of this project. 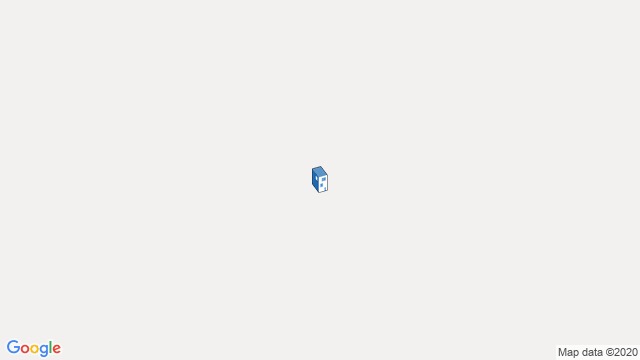 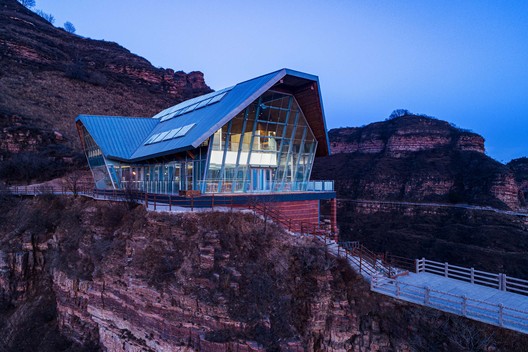 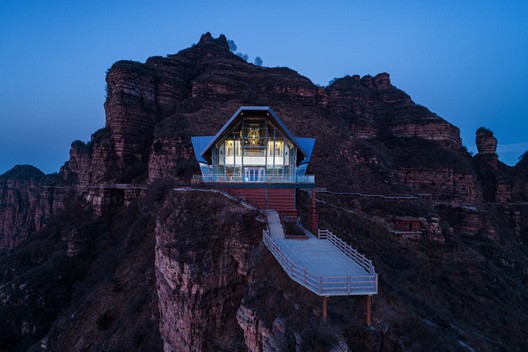