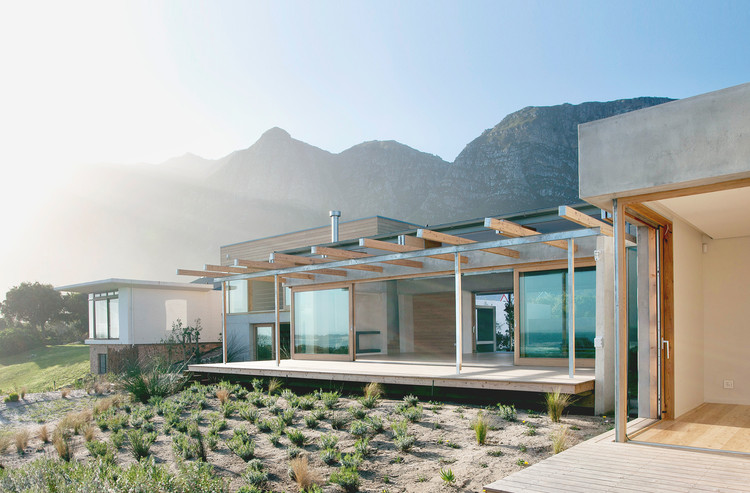 Text description provided by the architects. Located between Hottentots Holland Mountain Range and the Atlantic Ocean, House Lowe sits elegantly in its surrounding landscape. It is this location and the site’s climatic conditions which ultimately shape and inform the building’s design. This is illustrated through a series of frames, which continuously connect the user to magnificent ocean and mountain views around the site.

In view of the characteristics of the site, the owner did not want a house with a conventional front and back but a design that permitted a 360 degree enjoyment of both the mountain and ocean views. Additionally, the owner is an avid collector of first world wines and also required facilities to be able to work from home. The ability to entertain guests indoors and outdoors was also an important requirement.

The experience starts in a protected courtyard, situated at the back of the house which seamlessly links to the central open-plan living space. The living space frames a linear view of the ocean’s horizon towards the South. On the North side, a floating roof rises up theatrically in section to allow for spectacular views of the Hottentots Holland Mountain Range whilst allowing northern light to reflect in.

Each room repeats this theme with large glass openings, characterizing the space’s connection to its surrounds. In plan, the bedroom’s geometry steps out toward the sea on the eastern side of the house, allowing for privacy and uninterrupted views whilst protecting the main deck from the south-east winds.

On the West side a carefully detailed wine cellar tucks beneath the house and boasts simple tectonics of timber steel and light which overlook the sea. The pallet of materials used, glass, timber, and off-shutter concrete, allow for the building to co-exist with its natural surrounds. From the beach the house appears as a low slung insertion into the landscape, nestled in the lush shrubbery, without competing with the mountain backdrop. 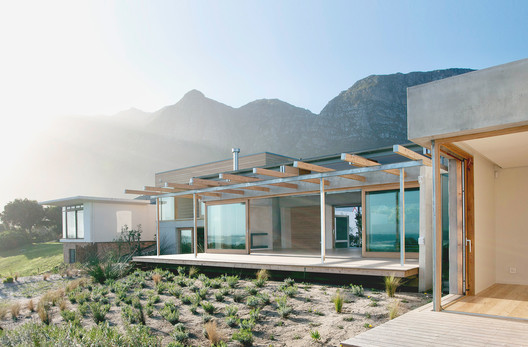