Kazakhstan's built environment is defined by a complex history. As a constitutional republic with a diverse cultural heritage, the country's architecture includes contrasting traditions, from integrating buildings with the landscape to standing out from it. Today, a mix of futuristic towers and monuments speak to a legacy of atypical design, and a series of modern projects showcase how architects are working to build a new narrative for the country. 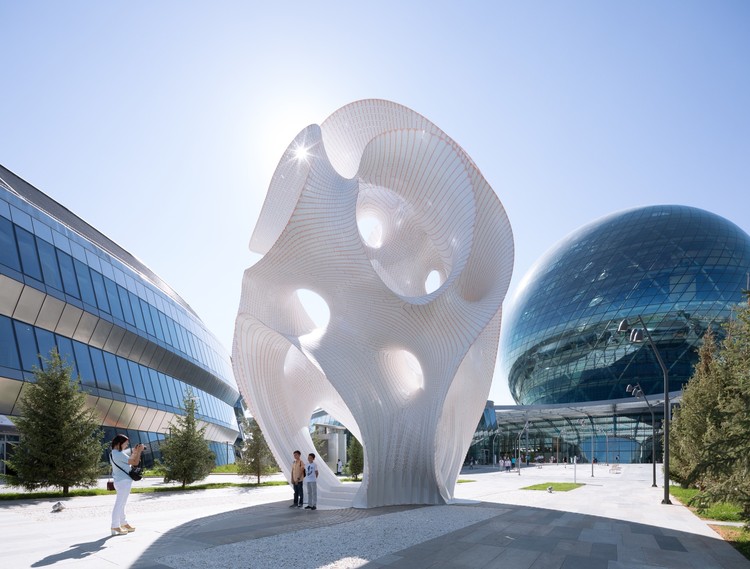 As the world's largest landlocked country and the ninth largest country in the world, Kazakhstan spans a diverse geography. Extending across both sides of the Ural River, considered the dividing line between Europe and Asia, Kazakhstan is one of only two landlocked countries in the world that has territory in two continents. The country's terrain extends from the Caspian Sea to the Altay Mountains, and from the deserts of Central Asia to the plains of Western Siberia. Between these landscapes, modern architecture is usually concentrated in a series of larger cities, like Nur-Sultan and Almaty.

Over the last two decades, contemporary architectural projects have emerged as the country's economy has developed. Kazakhstan was the last of the Soviet republics to declare independence, and many public or larger projects are now built between past infrastructure and civic buildings. The following projects illustrate some of the new architecture built in Kazakhstan since the turn of the century, including public and private projects alike. Together, they begin to show how designers are looking to the future while reinterpreting the country's complex past.

Intended to be a symbol of the burgeoning new capital of Kazakhstan, the Astana Arena has a spectacular elliptical form and a retractable roof that can be closed in harsh winter weather conditions to protect the players, the spectators and the playing surface. Located on the highway connecting the airport to the city the stadium is principally designed as a venue for soccer but it can be adapted for other sports events including the country’s favorite sports – wrestling, judo and boxing.

Haileybury, one of the Britain’s oldest and most prestigious independent boarding schools, has its Astana Campus situated on a 12 hectares site, with 20 000 m2 closed area. There were three challenges while developing the design idea of this campus: the vast and flat layout of the city, as well as the complexity of the program and the climatic conditions. The challenge of complexity inspired its counterpart, simplicity, as the main design strategy. The four parts of the school program (Pre-school, KS1, KS2, Senior School) each had unique spatial requirements, and are resolved into one comprehensive unity: the square.

Palace of Schoolchildren by Studio 44 Architects

The design of this "Palace" was inspired by Suprematist compositions and local construction. The Shangyrak is a wooden crown doming a Kasakh yurt with a central opening over the fireplace. In this project, this local element of a Kazakh traditional dwelling is reinterpreted as a cylinder 8 meters in height and 156 meters in diameter. The giant disc has openings and skylights providing natural light inside the building into a central atrium space. It covers stepped compositions of rectangular “boxes”, each containing a functional element – skating rink, museum, gallery, theater, etc.

Damir Ussenov and his architectural firm "Lenz Architects" designed a villa in the foothills of Almaty. The main aim of the team was to create a separate, isolated and safe space, while making it possible to enjoy the wildlife. The project's unique metal framework allows natural light to enter the interior through the dense thickets and difficult terrain. The facade consists of dynamic aluminum panels which using an electronic mechanism to close windows and isolate the house from the environment, providing security and soundproofing.

The Alliance Bank, the 10th largest in Kazakhstan, had the goal of strengthening its position on the international market in order to become one of the leading banks in Central Asia. S+A's proposal was designed as a cornerstone in its corporate strategy and an architectural landmark in the capital city. The design is based on the metaphor of a treasure trove, keeping its valuable content safe. Located on the new administrative and business center of Astana, the new headquarter expresses important values in banking: trust through transparency, as well as solidity.

Making the house as simple as possible, the team created White Line in a landscape of unique beauty. The main goal was to develop the project without harming the natural landscape. The exterior of the house looks different from different sides with a non-repetitive exterior. The appearance and interior support bring the color indoors, emphasizing the severity and unity of the house. Panoramic windows on both sides of the house evoke a feeling of openness within nature. The glass has a reflective property from the outside to reflect trees and clouds, so the house merges as much as possible with the surrounding environment.

Minima | Maxima was designed as part of the Structural Stripes 'Crawling Assembly' to provides a moment of contemplation. As the team explains, to be inside Minima | Maxima is to be "transported to a strange, future, science fiction world, removing visitors from themselves and finding within a sense of naive wonder." The project is radically different than normative built environments, fostering an impulse to explore and visually wander. Transformed into a childlike state, visitors can do so without the pretense of reference or concepts.