Save
Ciel, the World's Tallest Hotel is Under Construction in Dubai Marina
Share
Or
Copy

Set to become the world’s tallest hotel upon its completion, Ciel is a high-rise currently under development in Dubai Marina. Designed by NORR, and developed by The First Group (TFG), the tower will reach a height of 360 meters and will house 1,042 luxury suites.

The latest addition to the Dubai skyline is a tower situated at the heart of the Marina, in close proximity to the most popular attractions like the Marina Walk and the Marina Mall shopping and entertainment complex. With easy access to the highways and the metro, the project is well connected to the transportation grid of the city.

Scheduled to open in late 2023, the structure, under construction ever since August 2019, is a glass sculpture, inspired by the concept of vertical living. In fact, the scheme “emphasizes the sheer verticality of the tower itself”. Oriented in a way to maximize views, to Downtown Dubai and the Burj Khalifa to the East, Dubai Marina to the South West and out towards Palm Jumeirah and the Arabian Gulf to the north, the building accommodates a luxury hotel with a rooftop that hosts a pool bar, a restaurant, and an observation deck. Developed by The First Group, one of the region’s fastest-growing hotel developers with a pipeline of seven properties under development in some of Dubai’s most popular districts, the tower’s interior is inspired by the Japanese philosophy of Wabi-sabi, “a philosophy rooted in the appreciation of the imperfect and impermanent beauty of objects in nature”.

We are extremely honoured to receive these prestigious awards for Ciel, […] Ciel is a remarkable project that will become a landmark in its own right, further enhancing Dubai’s reputation as one of the world’s great cities and tourism destinations. The ambition and character evident in Ciel’s striking design reflects our unique approach to developing quality hotels that strive to set a new benchmark for upper-midscale accommodation. -- Rob Burns, CEO of The First Group, while receiving the awards on behalf of the firm. 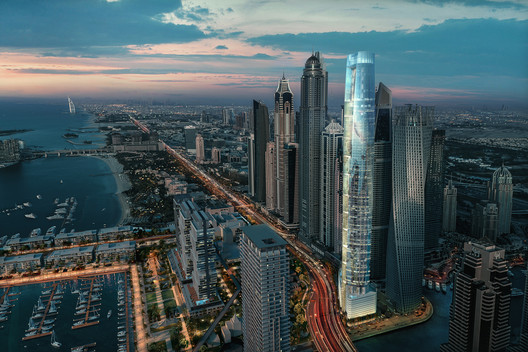