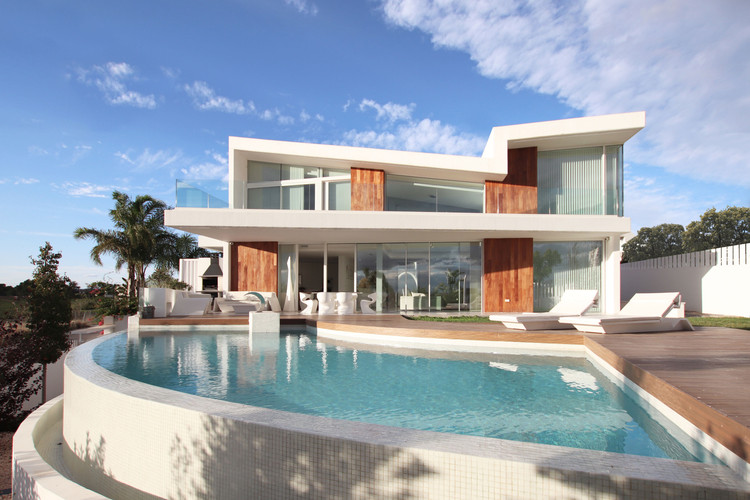 Text description provided by the architects. This new home of the Perretta architecture studio is located in the urbanization of Santa Bárbara in the surroundings of Valencia. It is a residential area in the west expansion area of ​​the city. Remember that Valencia is bordered to the north and south by extensive orchards of very low elevation and only west of the elevation rises giving rise to dry land.

The plot on which the house is built was extremely complicated for two reasons. The first because it forms the final round tip of the block and the second because the difference between the two streets that converge was more than 4 m.

From this complexity the advantage has been extracted that the basement is at a level of the lower street and the entrance to the house is at the other end, almost at the level of the ground floor.

The curve is absorbed with the shape of the pool that also serves to mark a ramp road that communicates the two extreme dimensions of the plot on the outside.

The distribution is based on a dining room, central space at double height, openly open the kitchen through a fireplace. The bedrooms are located on the east side, one above the other, except for the one that corresponds to the daughter, who is on the top floor, on the kitchen and who arrives through a walkway that crosses the central space.

The basement is transmuted on the ground floor, given the level of the lower street, and that allows you to place not only the garage but a workspace with large windows.

The house is built exclusively in white concrete, contrasting with the glazed and iroco wood cloths that fill the gaps left by the white shell, which is what draws the formal lines.

The system of lightened slab of hollow bodies "CHE" allows us an arrangement of non-orthogonal pillars and large overhangs, usual expression of the Perretta Arquitectura study. 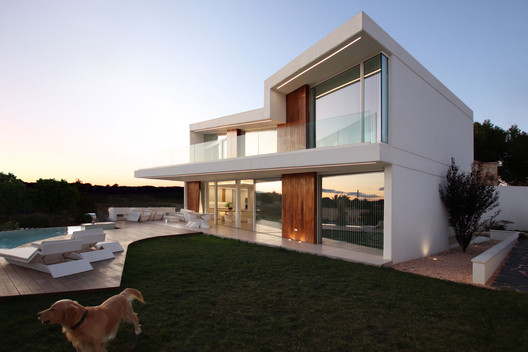