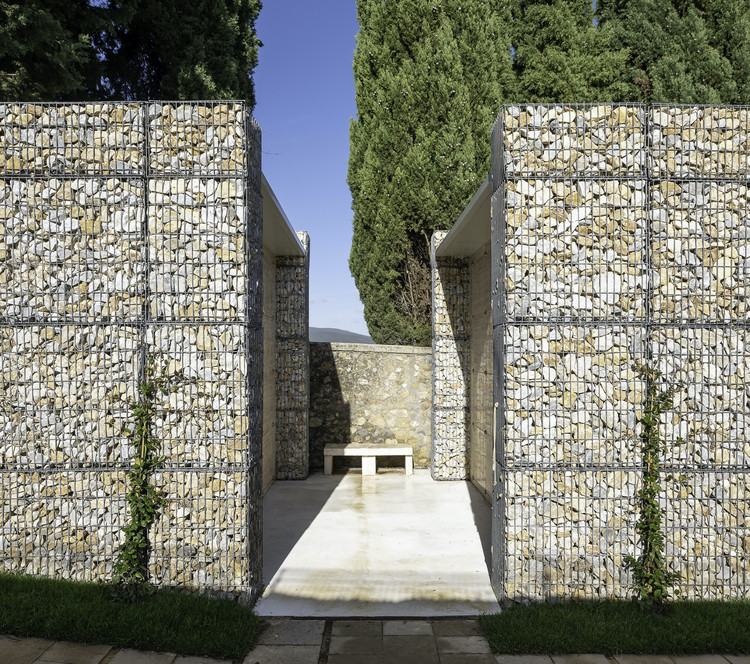 Text description provided by the architects. At the end of the 1200s, San Gimignano and Colle Val d'Elsa achieved full autonomy as free Municipalities and a pact of friendship was established between the two, which defined the territorial areas and expansion policies. Between 1309 and 1320, a mighty castle was erected on Monte Dei Lecci, acting as a line of demarcation and control. The town that soon sprang up around it was called Castel di San Gimignano. Before the 1300s there was already a church dedicated to Santa Cristina located in a small group of rural houses and farms in the area where the cemetery was built. The cemetery of Castel San Gimignano is a paradigmatic example of a "camposanto" in the Tuscan countryside: an expression of the civitas found in the village and its agricultural land, a source of life.

The typological characteristics of its uniform shape are still clearly visible: an enclosure with stone masonry and burial fields at staggered altitudes, following the slopes of the land in a terraced pattern. The multiple entrances follow the articulation of the two upper and lower fields.

The stone border wall is enhanced along the north side by a row of cypresses, while other isolated cypresses are found near the east and west entrances in line with the lower burial ground.

The cypresses visually mediate the cemetery's integration into the surrounding landscape. The structure's value to the landscape, in its minimalism and simplicity, is still largely preserved, both as a privileged point for viewing this landscape and as its natural continuation at the cemetery's edges, in a sort of visual continuum. The redevelopment project entailed a balanced relationship between the existing full and empty spaces. The new feature of the gabion walls containing local limestone, which traces the new niches, dialogue with the linear sequence of the boundary walls and the dry stone wall marking the change in height between the upper and lower fields. The chapel-like shape of the new niches creates a space suitable for prayer and remembrance. The sculptural mass of the two stone cubes of the new volume produce dialectical relationships between interior and exterior, full and empty, past and present.

The conscious choice to use an architectural component (gabion walls) usually used as containment for slopes and land was based on this place's manifest tension.

The dry stone walls represent the direct physical and spiritual connection with the lives of those who have lived in the environmental, civic and cultural context of Castel San Gimignano. A place full of history and work, with and for the land: a matter of sustenance and life. The dry stone terrace wall between the two fields has been restored and consolidated, and a protective shoulder made of natural linear gabions with multi varietal sedum plant essences has been placed at the top. The steps connecting the two fields have also been renovated, with the shoulders replaced with new gabion structures. In addition, two paths paved with different sizes of prefabricated concrete blocks have been dry-laid and grassed, marking the routes between the various areas. The upper field has been freed from the old demolitions and planted with grass. Lastly, maintenance work has been done on the damaged plaster and the restoration of the exterior of the small existing chapel and the walls. New cypresses soften the visual impact with the old burial niches built in the 1970s, and jasmine plants grow along the sides of the gabion walls. As the seasons' pass, they will change the wall's appearance, a metaphor for how memory and life are all one in the transience of life. 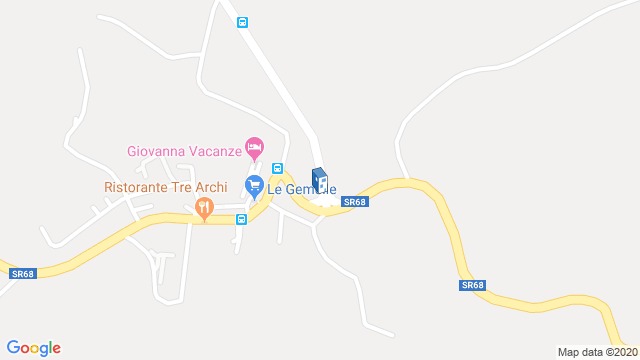 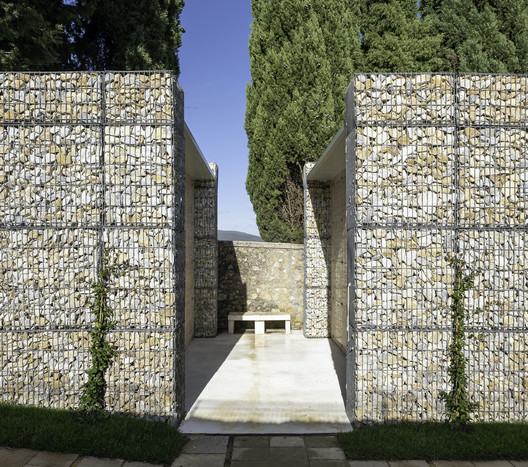