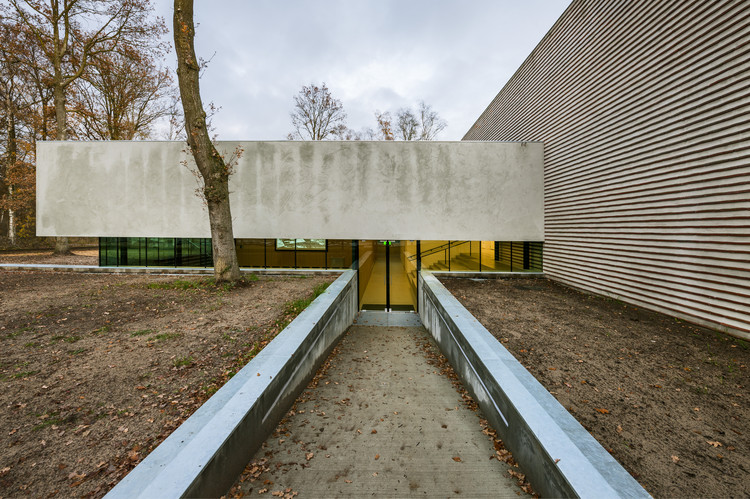 Text description provided by the architects. In 2002 a small part of the original SS concentration camp Vught was restored as National Museum. The entrance building is conceived as a wall that shields the restored camp from the outside world. The different spaces in the building each have their own space ratio, daylight entry and in a limited number of cases a view of the sky or the old camp remains. Nature or camp are thereby framed, creating a form of alienation and reflection. For DoepelStrijkers, the modesty, the visual relationship and minimal impact on the surrounding landscape, formed the point of departure for the design.

In 2018, due to increased numbers of visitors, the museum board decided to expand and renew the existing building designed by Claus and Kaan. DoepelStrijkers was asked to design the New NMKV. The new permanent exhibition was designed by Perspekt. The assignment for DoepelStrijkers included an extension of the existing museum, a new layout and integration of technology for the existing museum rooms and the reorganization of the reception area of ​​the museum with a stronger connection between the various entrance areas. The reception area has been completely renewed with a reception desk, the shop and the museum cafe and a number of related functions such as a meeting room and toilets.

The extension is connected to the reception area and is conceived as a solid block which is pressed into the ground at the rear of the existing building. As a result, the volume looks smaller than it is, and it occupies a modest place in the outside area. A horizontal cut is made through the volume at ground level, and the two halves are pulled apart, visually creating a heavy roof that floats just above ground level. Visitors look through the window at ground level, this combined with the heavy volume above creates a sense of alienation. Conceptually, the volume should be made of solid concrete, but for environmental reasons a light steel construction with modular wooden façade elements was chosen. By finishing the wooden façade inside and outside with a thin concrete plaster, the volume looks like a heavy monolithic mass.

A wide tribune staircase bridges the difference in height with the existing building. The extension is subdivided into three small rooms, and a large area equal in width to the tribune staircase. A sliding wall makes it possible to close off the large area from the tribune and corridor zone, but also to turn it into an auditorium for special events. In addition to these main rooms, the extension includes toilets and a room for volunteers.

The extension is modestly materialized in pure materials such as wood, concrete and aluminum. Second hand aluminum panels were harvested from another project for the ceiling and cladding of the tribune staircase. The minimalist, modest and sober use of materials contributes to the narrative of NMKV. The visitor experience and the transfer of the stories of the camp prisoners are central. 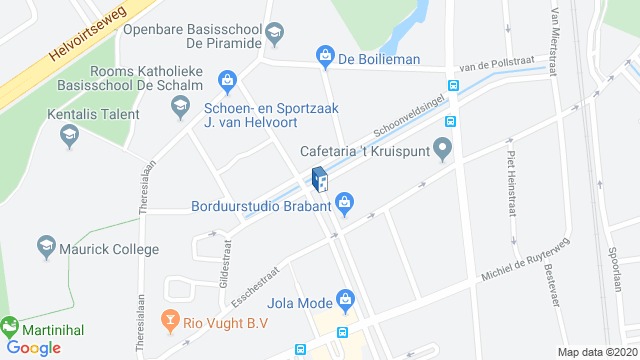 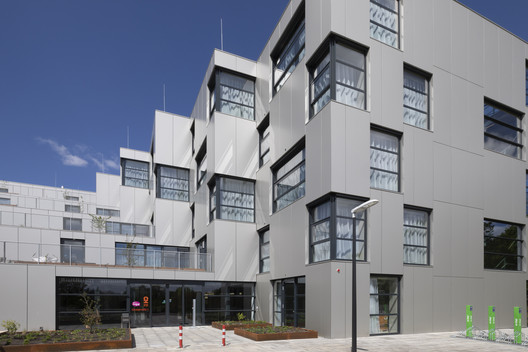 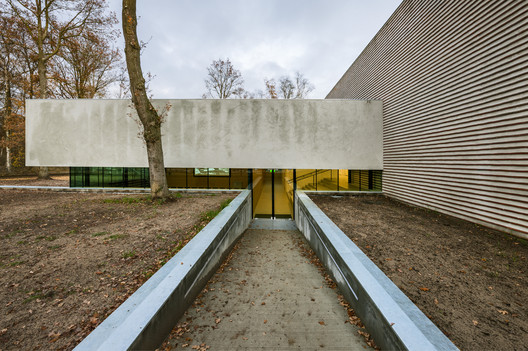