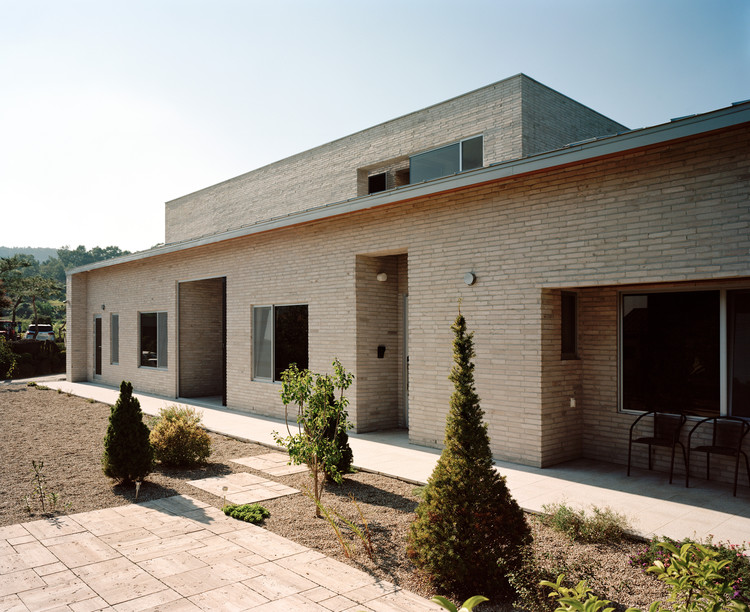 Text description provided by the architects. A stream flows swiftly along the front of the village and a mountain stands in the background. Colorful gabled-roof houses are gathered around, which is commonly seen in rural areas. By walking up along the winding street, ‘House Jipyeong’ is situated on a land that overlooks the neighborhood with a scenery of mountains and fields. The house is designed as an atelier for a painter and a living space for her family. The main reason the artist needed a house was to have her own atelier where she could work on paintings of various sizes. Also, the family wanted to have a life near to nature that would remind them of life in a Hanok - a traditional Korean house where they had once lived. At the beginning of the design phase, several houses were under construction just across the road to the south.

It was necessary to place the house to the back of the site so that it could look into its own garden to the south instead of someone else’s house, where they could then grow flowers, trees, and vegetables. The house consists of two volumes that are connected lengthways. The rectangular volume that includes the high-ceilinged atelier is positioned to the back, while the gable-roofed volume, where the living space lies, is attached to the front. By making a staggered arrangement of two masses, separate entrances could be made. The floor plan of the linear type Hanok, with the kitchen, living room and bedroom assembled in a straight line, was the backbone on organizing the gable-roofed volume. The small courtyard under the gable roof with a roof-light is placed in-between the living room and the dining room.

The design was focused on a strict separation of the individual space, but also on connecting naturally the family members in a common area. The artist’s bedroom is placed on the northern part of the rectangular mass and has a short route through the outdoor passage towards her atelier. Another door from the atelier leads to the dining room. The tea-room for the mother is in the attic on top of the kitchen, while the secret reading room for the father is on the opposite side of the attic accessible through the closet door of the bedroom. The study room for everyone is placed in the middle of the house, opening to the hallway, the living room and looks over to the small courtyard. A unique vertical circulation has created the design’s interesting scenes and forms.

The main staircase leading north can be reached directly from the courtyard, allowing easy access to the second living room upstairs. Through the small balcony in front of this living room, an outdoor staircase goes east, leading to the roof terrace that provides a complete view of the surroundings. This twisted circulation has made it possible to create an arch on the corner of the atelier ceiling, right underneath the roof staircase. It was necessary to construct with reinforced concrete to realize the high-ceilinged atelier. Only the gable roof was constructed with lightweight timber construction, which helped to reduce the budget. The light-colored used brick was chosen for the cladding of the façade, and the bricks are layered only with the horizontal joint highlighting the concise look of the two connected volumes. 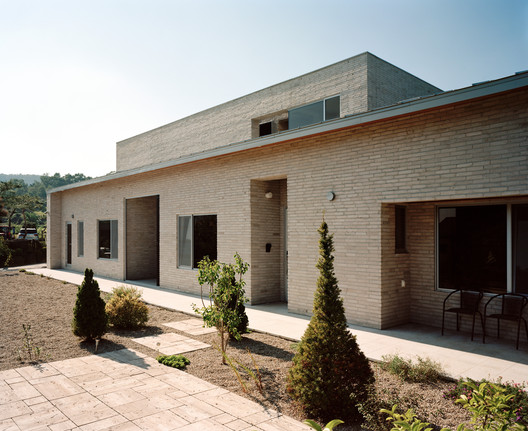