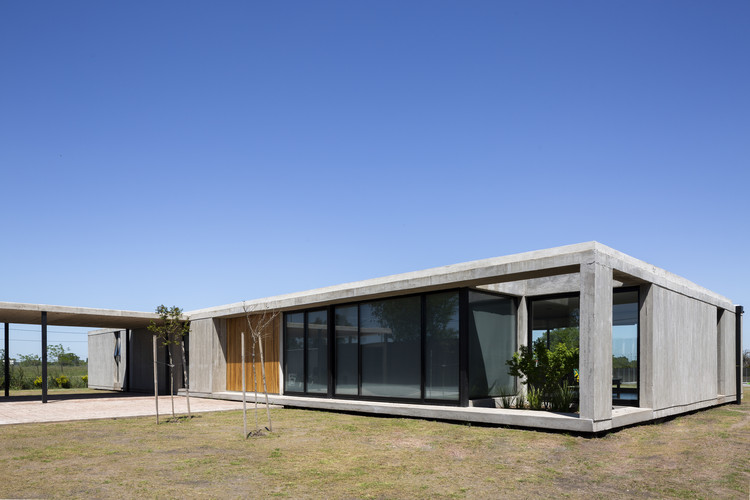 Text description provided by the architects. This house located on the outskirts of the town center, within a neighborhood in the pro-cess of transformation and development, is materialized through simple lines, pure forms and a functional layout that conceptualizes a modern imprint. On a large lot, in a quiet neighborhood surrounded by green, this detached house was pro-jected. Developed on one floor, one of the premises that guided the work of the Architect Felipe Gonzpález Arzac and that is constituted as a feature of his works, is the choice of noble materials for its construction; Concrete, wood, metal and glass predominate.

The first thing we see before entering, on the street, is a large concrete wall, accompanied by an imposing rusty metal gate. Then, from the same mixture of the two materials, a low wall and a series of sticks that let the house appear from behind, provide privacy to the house from the street. Then, a slab that crosses transversely, houses the cars and connects them through a ser-vice entrance with the house. As for its implantation and morphology, a large rectangular block that occupies the lot in its entirety leaving two statutory retreats and perforated by three courtyards, assemble the house. The entrance door, made of petiribí wood, marks the work with its imprint. Next, a hall with a reception cabinet, where the concrete accompanies the ceiling. The constant, which will give continuity to the projected spaces, are the cement smoothing floors that were chosen throughout the lodging. As for its spatial distribution, the functionality of the environments was privileged. In this way, two large sectors were raised; a public one, where the living room, study or games room are located, separated with a small internal patio of the kitchen, which is the space in charge of articulating this sector with the private part of the house.

Towards the front of this other private sector, the services are located: laundry, toilette, and two bathrooms. There, a large internal courtyard provides light and a place of expansion and recreation for this more intimate sector of the house, to carry out more private activities, and designed to be completely separated from the public spaces of the house . Three bedrooms are housed in the private part of the house, two of them the same and mirrored, and a last bedroom with dressing room and bathroom. To the private sector and kitchen, a large gallery with concrete ceiling and metal-coated grill is added, which expands towards the bottom and absorbs the sunset sun. Finally, on the outside there is a concrete house seen on all sides, while to counteract this proposal, inside the ceilings of non-circulation environments, they were made with white plaster to provide more clarity to each space. A house that dialogues its conditions of implementation, noble materials, functional require-ments, a modern and minimalist language, creativity and identity of the Felipe González Arzac Studio.