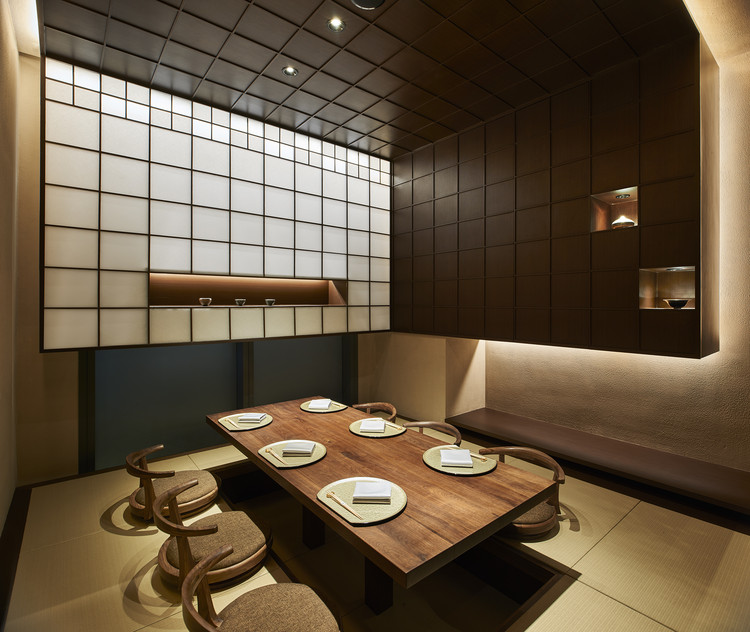 Text description provided by the architects. What’s the most wonderful image of gift box flashing through your mind?

Kan, a high-end Japanese restaurant that designed by odd, is whispering a story about presents where a brand-new form is ready to unfold the design idea.

Underneath a purely black space, lighting up six square boxes in various shapes was inspired by traditional Japanese Juubako, a wood box with multiple layers, which only appears as a food container in significant events or ceremonies. Based on the concept above, a profoundly old painting technique, known as Maki-e, which originating from Tang Dynasty but fostering in Japan, has been sublimated for a higher quality and endowed them new life. We call it ‘a present from far afield’.

Traditionally, the craft of producing Maki-e is to blend metal powder with lacquer, then draw on wood material through skilled craftsman’s hand. This time, under the premise of preserving the original visualization experience, we strived to replace the traditional method by changing it into glass clip painting, as a result, perfectly depicting the glorious time of traditional art.

These six gift boxes are scattered in a T-shaped black space, including five private rooms and one semi-open Itamae area. Boxes are presenting in either floating or ground-touching, but in the meantime, respectively separated. On top of this, this space has ingeniously created a sense of staggering.

Allocating a karesansui landscape alongside the traffic flow of customers, it is expected to bring the joy to people who wandering and discovering in this space. The viewing window embedded in wall not only breaks the stiff boundary between internal and external but also offers an extraordinary observing experience.

The outstanding representation of Japanese cuisine art is, undeniable, the Itamae.

To ensure the freshest food can be immediately delivered into chief’s hands, the kitchen and Itamae preparation area are connected closely to each other while embodying its distinctiveness in a semi-open shape. This is the only gift box opening to public. In the whole picture scroll, those wooden lines in light tone concretize a cluster of clouds from remote sky, black wood grid and terrazzo cooperatively abstract an image of mountains nearby. Behind bar counter, the niche is covered by marble in dark tone with unique texture that has a strong visual contrast with the entire light tone.

Where light illuminating, scattered gold powder shines beautifully upon the black wall. Designed for a purpose of business banquet, these two private rooms receive more metal elements rather than wood materials, which fill up the space with both formality and vitality.

In four-person private room, ceiling and wall stretch together and eventually shape like an arch. In terms of wall, those exquisite natural stones are input with new figure language by carving them into single small pieces.

Speaking of six-person Washitsu (a Japanese-style suite), it utilizes similar materials but in a different expression. Compared with other private rooms, this one is lack of dazzle, but full of quality and simplicity with wood grid outlining in dark brown, chartreuse green Tatami cushion, beige coarse texture painting and white matte Japanese paper film. 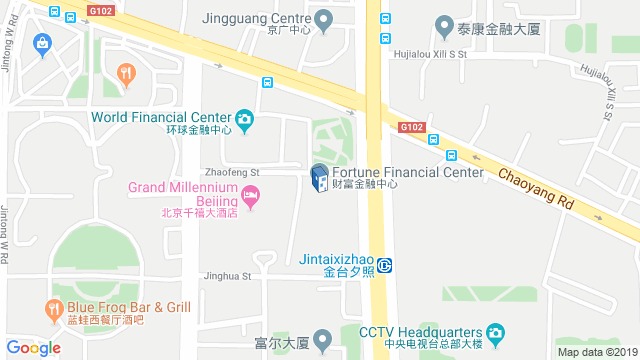 Location to be used only as a reference. It could indicate city/country but not exact address.
Share
Or
Copy
About this office
odd
Office
••• 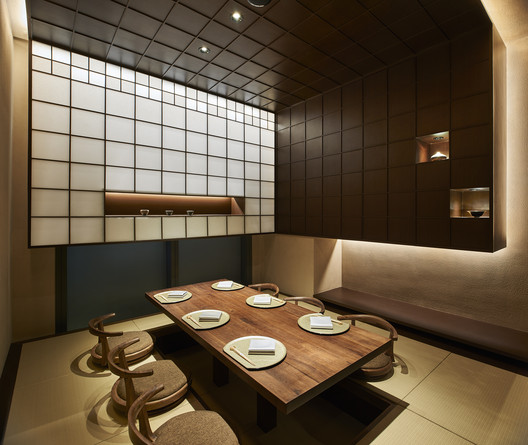