Modern architecture is tied to cultural history. In Kuwait, the country’s built environment and housing has been reshaped by larger economic and cultural movements. After the discovery of oil, the country experienced economic growth that drove development across diverse markets and transformed how citizens live today. 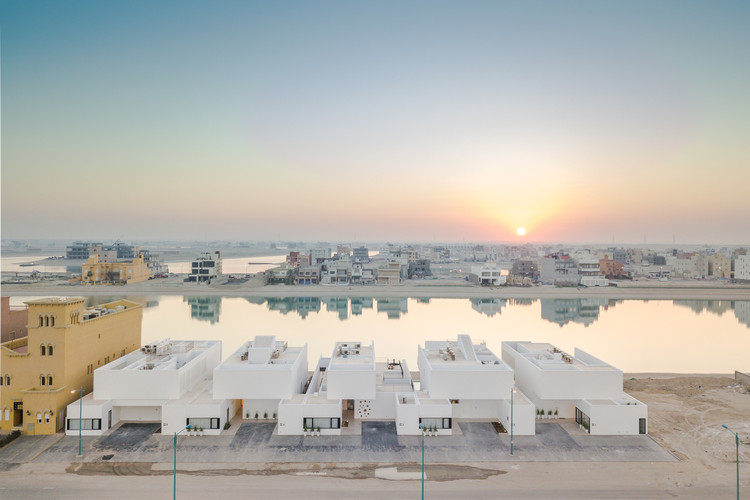 Kuwait's history was first tied to trading and maritime exchange. Bordered by Iraq and Saudi Arabia, its location at the tip of the Persian Gulf led to its development as a historic trade port. While traditional Kuwaiti architecture was originally built with readily available materials like mud, rubble and stone, one of Kuwait’s most iconic structures became its water towers, iconic structures made with conical spires and spherical water tanks. Over time, the last century has seen a more radical turn to International and Modernist styles.

Taking a closer look at Kuwait’s contemporary architecture, the following housing projects represent some of the more recent homes built over the last decade. Designed with a diverse array of programs across multiple scales, the projects are made with their own take on traditional building materials and spatial organizations. The result is a range of residential projects looking to rethink how people live in Kuwait.

The site can be accessed from either side of the surrounding streets to allow for both a private and a public entrance. After moving along a curved wall that guides the visitor from the exterior of the plot into the center, one reaches the main entrance into the house. Upon entering through the main door frame, the space opens up to reveal the swimming pool and the public living areas of the house. The form of the residence is reminiscent of the movement patterns of a mop, from which flexible volumes are organized diagonally around a central axis.

The Street House is located on a 16m wide and 25m deep lot between two streets in a new suburb in Kuwait City. The idea is to build a house with an internal street/courtyard that spans between the main street and the service road at the back. This internal street splits the house into two masses; hence the program is divided into two: living and services. The living room and bedrooms on one side and the services and vertical circulation on the other connected via the internal street.

The Six by fikrr architects

This project, consisting of six identical detached houses located in Bnaider Kuwait . The design of this project consist of three phases, the first phase contains of two homes were completed in 2010 and they are 700 square meter the rest of the phases upon the client request. The volumes consist mainly of four facades which are completely exposed to the exterior through its east and west facades and closed by white walls in the north and south facades. The desert landscape design emphasis the land original relation between desert and sea.

Residential Nasima aims to question the essential realization of an ever modernizing and homogenizing surrounding urban context. As Kuwait City moves towards drastic and rapid modernization, the architectural values that should protect the culture, traditions of the city, and the individual are starting to disintegrate. To instigate the debate of preserving culture while allowing progress, rN blends into the city fabric. The parti takes inspiration from the historical natural landscape and urban clusters, while providing a provoking contemporary design solution in contrast to it.

The project is located in Sabah Alahmed Alsabah Maritime City in the southern part of Kuwait. Developed to expand the length of available shoreline, the development brings the sea into the desert to create a series of canals that are anchored by several docks and marinas and activated by many other recreational activities. The five plots of the five residences sit on one of the inner canals overlooking the sea. From an early stage, the idea was to develop a sense of unity, using the same architectural language of simple plane geometry, as well as the same basic concept and programmatic organization.

Tetris House sits on a 500 square meter lot with a 25 meters street front. The form is composed of three main painted masses carefully veiled by two cladded walls. Two of the masses are separated by the horizontal circulation path that is perpendicular to the third tall mass which houses the vertical circulation. The walls hover on the front façade with cutaways revealing certain openings and hiding others. A prominent element on the façade is the main door. The 4 by 4-meter wood composition are made of two disparate doors. One is low and wide for the daily entrance and the other is high and narrow for the guest entrance.

This house is located in a corner lot in the residential district of Al-Salem. The project was developed with a double condition imposed by the clients: giving complete privacy to its users; and become an iconic element in the neighborhood. The building is a folded structure of reinforced concrete as an origami, which revolves on itself continuously to create a central courtyard on which all the spaces of the house revert. The few openings to the street are always biased, preventing the view of the neighbors and excessive sunlight in the rooms.