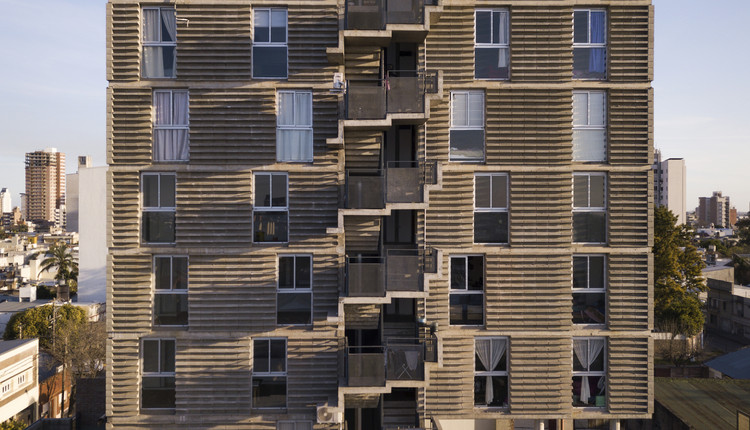 Text description provided by the architects. It is a horizontally built apartment building on a confined plot of land in the city of Santa Fe, located at the intersection between the streets Pasaje Maipú and the north-east corner of Calle Urquiza. The built volume lies on the south and west medians, freeing the corner to configure a square with trees, functioning as an entry for pedestrians and vehicles.

In this type of undertakings, the space used for common space is considered as a non-quantifiable area in terms of money, therefore, these sectors are usually reduced to the indispensable minimum. On this occasion, the entire built mass (which houses 18 units with surfaces that vary between 40 and 65m2) is articulated around the common space; which constitutes of an ascending route of diverse configurations. The access platform on the ground floor is followed by three floors of large platforms and internal stairs, the green terrace for common use on the 4th floor and there, emerging from the volume of apartments, the staircase/balcony for the seven upper floors. It is a route that relates in different ways to the immediate environment: the presence of the entrance platform minimizes the impact of the building on this neighbourhood of low houses. Open shields allow visual contact in both directions, interior-exterior, exterior-interior, as a sign of empathy with the environment.

The bearing structure is solved with a system of slabs without beams. This system considerably decreases the amount of concrete needed and has a thermal superior efficiency to the conventional solid slab. The enclosure is formed with a double-wall composed of an exterior face of precast concrete bricks placed in a rotated manner. This succession of small-sized parasols forms a “self-shading” facade: a surface that casts shade on itself in summer and allows a greater impact of the sun in the winter. In its inner face a 15cm thick cellular concrete brick wall complements the system. 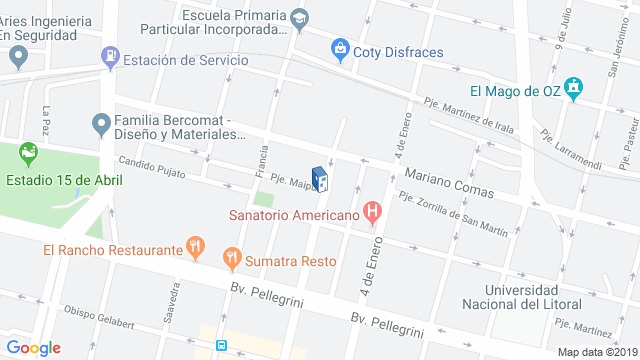