Save
Krft Chosen to Create a New Building for the Performing Arts in Brighton, UK
Share
Or
Copy

Brighton College has been modernizing its 19th-century campus, for the past 10 years, with the creation of new additional contemporary buildings by renowned names like OMA, Eric Parry and Hopkins. In 2019, the college initiated a two-stage design competition for their new building for the performance arts, where at the final stages, Krft was selected as the winning team. Actually, this year’s contest requested a 3000 square meter mixed-use educational building.

Entitled Project 175, the building will host all the performing arts, with a 400 seat theatre hall at the core of the structure, “in between the listed Gilbert Scott designed Main Building and the new Sports & Science building by OMA”.  Krft, a firm that was responsible for the design of Singer Laren, a regional theatre and museum in a rural community, presented a proposal that suggested moving the theatre hall upwards, to let it float above a multi-oriented foyer space, generating “connections to all outdoor spaces surrounding the site”. Therefore, project 175, a pivotal point for movement around the campus, has no back façade.

On another hand, the studio spaces, “positioned in an underground level, use their double-height to capture daylight and views from the ground floor and lift up the foyer space to the upper Home Ground level”. With a concept that merges the monumental with the contemporary, Project 175 resembles a white chalk cliff, rising up from the green campus space. Finally, regarding the envelope, “the facade, mixing contemporary light brickwork with darker traditional flint bridges the different characters of the surrounding campus”. 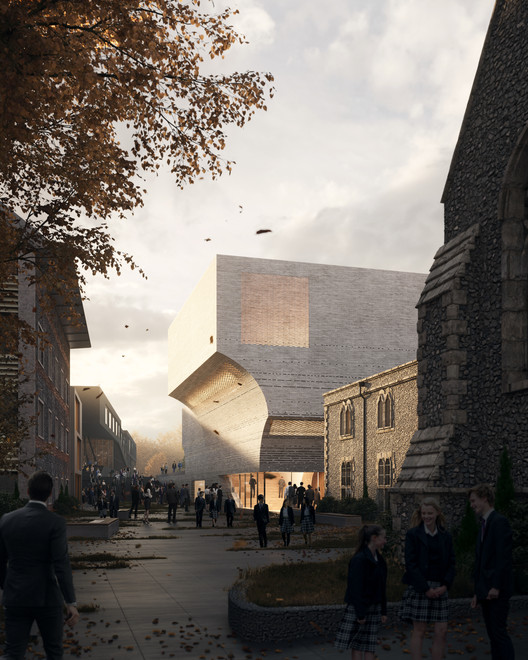