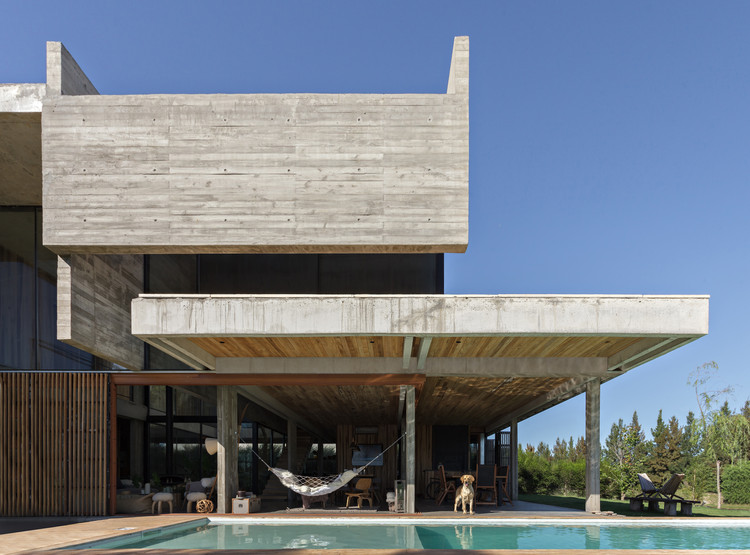 Situated in Nordelta Neighbourhood, in Buenos Aires Province, with its particular topographic conditions given not only by the geometry of the space but also by the unique relationship with its surroundings, the residence tries to handle the fact of thinking a residence in a private neighborhood. Bordered by water in two of its sides, to which the project expands its visuals, and next to existing construction, the building permanently tries to dialogue with its nearby surroundings. One of the main questions during the project work has to be with the relationship between interior and exterior spaces… how does this landscape should be inhabited? which is the meaning of redefining the domestic world?

The house takes this issue as its main concept, creating an inner outside (but inside) green central space, which not only relates the different activities of the house among them but also represents the key point in the pursue of finding a suitable relationship between interior and exterior spaces. After this gap, empty but so-full-of-live space, a continuous transition of vertical and horizontal visuals, is followed, redefining the public and private spaces, looking for the edges to be disolved. In the ground floor, the pool rests above the slope, creating a direct bound among the lagoon, the living room, and the outside dining room.

Also, the living room takes place as a transition between two different exterior situations, being them “the own exterior” and the exterior which belongs to the landscape itself. In the first floor, the bedrooms stays located in two volumes also defined by the inner exterior space, giving different answers depending on the surroundings. Another important concept that comes alive in the house is the relationship between material and structure, in this case, represented the first by concrete which defines the main structure and the second by wood. The columns stand for the concrete slabs which hang from the superior concrete beams. The structure, with its different textures and dimensions, defines the boundaries among the spaces and takes the main role by achieving a clean floor ground with blurred edges. The only clear verge comes to be the horizon the landscape sets. 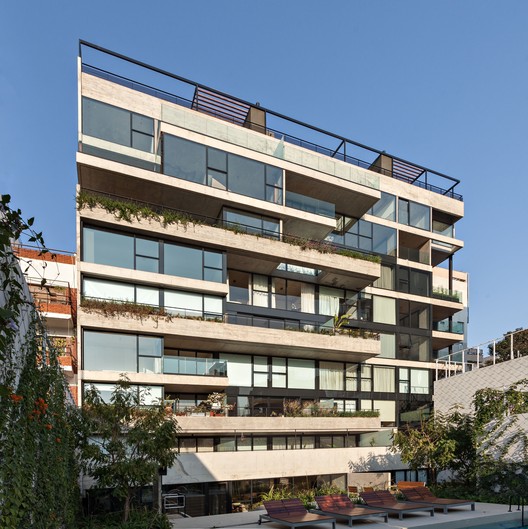