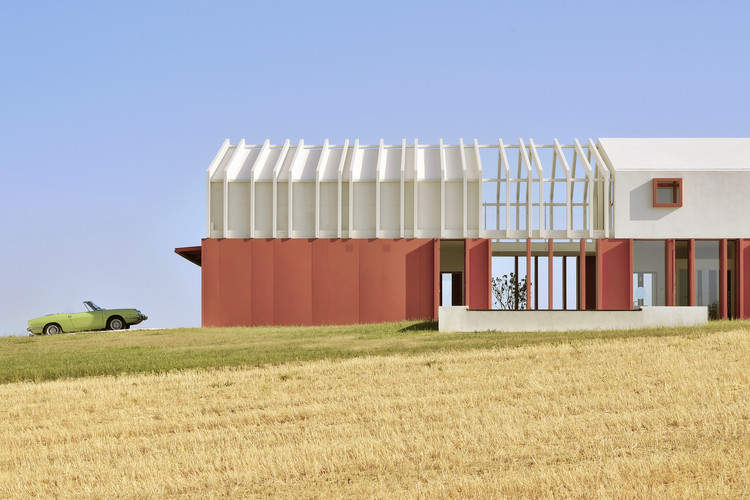 Text description provided by the architects. DESIGNED BY SIMONE SUBISSATI ARCHITECTS, THE BORDER CROSSING HOUSE SITS ON THE HILLS OF THE MARCHE REGION IN ITALY, LETTING THE LANDSCAPE TAKE CENTER STAGE. A SHORT FILM DIRECTED BY FEDERICA BIONDI TELLS ITS SPACES AND ITS PHILOSOPHY.
Proudly standing on the hills in the Marche region of Italy, the “Border Crossing House” by Simone Subissati Architects is a private residence that recovers the essential orthography of local rural houses, while evoking the experimentations of some of the protagonists of the Italian radical avantgarde. A building that works with the environment and takes cues from the landscape. A new film by Federica Biondi, set during a day of harvesting, narrates its essential and unique qualities of the house.

Lush grass fields surround the “Border Crossing House”, the private residence built by Simone Subissati Architects in Polverigi, in the hills near Ancona, Italy. Set on a ridge, between the city and the countryside, this house, traversed by the landscape, fits into the territory, exploring the theme of the border and searching for new forms of permeability in space and time. Simone Subissati was trained in the Florentine school of architecture and a pupil of Remo Buti and Gianni Pettena, exponents of the Radical movement. He designed the residence with clean and original forms, bringing together the orthography of traditional rural constructions and the experimentation of various architectural experiences to create a project meant to make a difference. An architecture with a strong conceptual soul, captured by director Federica Biondi in the short film “Rustico” she just completed. “Rustico” tells the story and the poetics of the Border Crossing House and explores its unique luxury, one that does not rely on opulence and ostentation, but on space, freedom and flexibility of use.

The rectangular building, covered by an asymmetrical double-pitched roof, runs from east to west, in close relation with the surrounding cultivated land. The presence of numerous openings, different in shape and function, turns the house into a sort of device that connects the hilly landscape with the intimate, domestic space. The Border Crossing House designed by Simone Subissati is the outcome of a reflection on inhabited space seen as a threshold: the house relies upon its relationship with the outdoors, intended as a territory extended to the extreme of one’s gaze. No fences guard the Border Crossing House. It is located at the edge of the town of Polverigi, where cultivated fields are. Grass reaches the very edge of the house, which is surrounded only by a thin pavement. A strip of decorative perennial grasses ideally envelopes the house, as if it belonged to the fields (cultivated with wheat, barley, field beans, sunflower).

“The idea was to overflow, to break the boundaries, without following conventions whereby the private living space is separated from the agricultural workspace.”
Simone Subissati.
The ground floor, dedicated to the living area, is characterized by the presence of a deep red coating (the main body is made of iron painted with an anti-rust primer). The upper floor, in addition to housing the sleeping area, also includes a large open space contained by a light frame covered with a micro-perforated and pre-tensioned membrane. It distinguishes itself by the color white and it gets completely illuminated at night. A large central portion of the volume is left open on the ground floor and can be crossed from side to side. In addition to this opening in the building, large sections of the metal enclosure easily turn into apertures thanks to the windows, which, when opened, are orthogonal to the facade. This allows the living room, kitchen, and spa to establish a direct relationship with the outside space. Thanks to these devices, the volume of the building appears almost to be hovering over the ground. This perception is also enhanced by the presence of the swimming pool, placed perpendicular to the house and surrounded by grass, reminiscent of the water- collection tanks used for irrigation.

The upper floor is accessed by a wooden staircase with an elementary structure, painted white. From it, one accesses the most private area of the house, where bedrooms are hosted. For the rooms, instead of simple windows, Subissati designs visual devices, which he calls “diaphragms.” As on the ground floor, windows here do also allow one to contemplate both sides of the landscape. Although very small in size, these openings have been designed to create surprising optical effects. A play of mirrors, arranged to completely cover the side openings of the windows, multiplies the views of the surrounding landscape. Protected by a simple chicken coop net, a balcony leads to a space where the winter garden and a second living room are hosted. This section of the building is made of wood and covered with a micro-perforated membrane that during the day allows natural light to filter inside the house and at night turns the Border Crossing House into a sort of large lamp.

“I was fascinated by the rural houses of my grandparents and relatives in the Marche countryside, characterized by a straightforward simplicity, a true essentiality that is very different from today’s trendy poetic of minimalism. They were houses that could be crossed from room to room, the workspace on the ground floor, connected and open on both sides.”
Simone Subissati.
A playful attitude led Simone Subissati to think of the project as an assembly process. In this sense, the Border Crossing House tends to become a metaphysical element, a sort of archetype of the rural house elaborated through a constant reference to ‘memory’ and ‘play’. Simone Subissati’s project, devoid of any vernacular temptation, is committed to contemporaneity. Guided by a strong conceptual - rather than formal - inspiration, Simone Subissati avoids any contemporary mannerism in his choice of materials and furnishings. The furniture is all custom designed by the architect himself as his aim was to create a space that would feel “both eternal and open towards the future.”His compositional alphabet describes a sense of openness and lightness, while also offering a sense of flexibility that involves the whole house from its spaces to the furniture.

The structure of the building is made of steel, except for the volume on the upper floor, accommodating the open space, made of laminated wood and covered with micro-perforated metal sheets. The remaining part of the upper floor is finished with a self-cleaning plaster. The pilasters from which the structure on the ground floor takes shape and to which the swings of the doors and of the windows are aligned, also accommodate drains and ventilation ducts. A rainwater collection network is connected with the underground tanks for water supply. The building responds to passive bioclimatic standards, as it allows a thermal gain in the cold months and a natural cooling in the warm months, thanks to cross-ventilation (no air conditioning is provided) and the chimney effect.

“For the Border Crossing House, I imagined a space that would feel as if it was “inherited.” I wanted it to be the least opulent it could be: it is meant to feel “as if it had always been there” though being contemporary and in many ways very distant from tradition. So essential that you can almost think of it as a temporary place as if it were an outdoor park. A light, flexible space that, as if it was there already, could now be reclaimed. A space without frills and without luxury, just like the buildings of the rural tradition where people both lived and worked.”
Simone Subissati.
The furnishings are in solid ash wood, used with all its parts - bark, knots, and splits - and dyed white. Or in pre-finished board panels of pine (for doors, doors and secondary partitions, such as the walk-in closet that also acts as bed headboard and bathroom / spa block on the ground floor). The kitchen countertops, the sink and the basins are customs made in cement and quartz, designed by the architect. 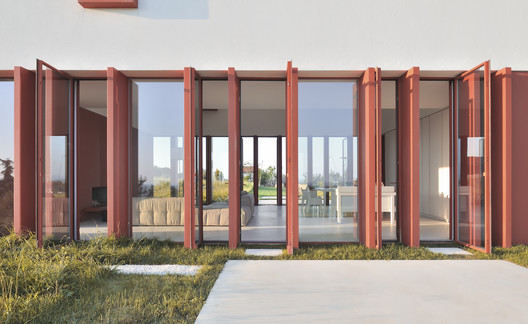