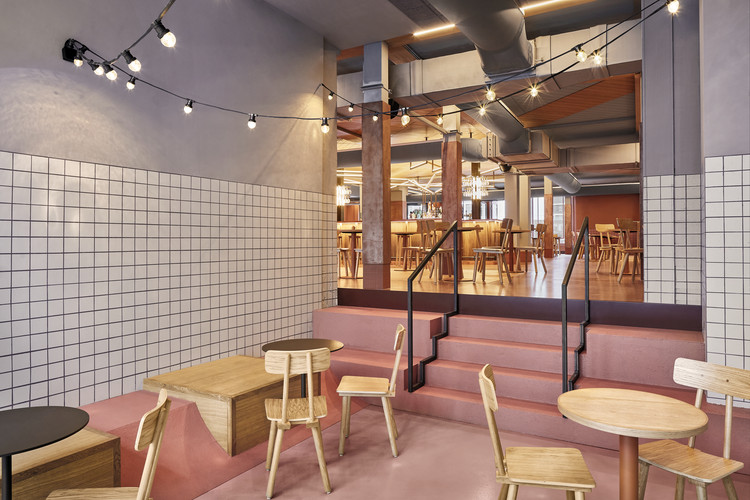 Text description provided by the architects. Wrapped around an internal courtyard of the Haagsche Bluf, the food court spreads across three adjoining buildings, connecting multiple floor levels and irregular structural grids. The new design simplifies the original chaotic ‘forest’ formed of existing columns, beams and staircases, turning the dark and low interior into an open public space heavily inspired by the tradition of the greatest European piazzas. For the basis of the concept Studio Modijefsky chose seven unique elements which can be found in all the typical urban squares: landmarks, striking paving, fountains, stairs, merchant stalls, playgrounds and statues. Each of those objects has been translated into a contemporary architectural component, forming a new design language which links together the spaces forming the venue.

The most prominent, iconic part of the urban landscape – the landmark - is represented by a centrally positioned bar, divided into two parts. The large main bar faces the entrances, while the opposite side forms a more intimate cocktail bar. Both volumes are finished with bronze, red marble and terracotta tiles, seamlessly merging with the floor and plinths of columns. The tiles come in various sizes and colours, mixed with poured flooring, referencing paving patterns used in urban squares, differentiating or connecting different levels in space. Various floor heights have been used to their advantage, with large tiled benches raising from the ground, forming custom fixed seating arrangements.

Another structural element reinvented as a social place for people to gather on is a large staircase. Previous strictly practical stairs were replaced by a large bespoke structure – a perfect meeting point which can be used as makeshift seats and tables. Made of wood with terrazzo and mosaic tiles and visible from various points within the venue, it also invites people to explore the upstairs bar. Throughout the space each corner has been thoughtfully considered and turned into the best possible party spot, offering endless opportunities for both large groups and more private gatherings. Even the smallest room of the whole interior has been turned into a playground mimicking skateboarding half-pipe – a space which can double as a dancefloor.

Statues, as symbols of the historical past, are represented by structural columns. Their shapes and finishes differ depending on their position within the space. Columns surrounding the bar are the most sculptural, finished with bronze facing material. Chosen supporting walls clad in dark blue tiles, combined with integrated light elements, plants and oxidised copper are an abstract representation of fountains, bringing colour into the interior. Remaining columns are clad in brass, yet another material taken from the tradition of the Mediterranean piazzas.

The final symbolic element of the interior: the food stalls, representing traditional merchant's stalls, are located on the ground floor of the building. Placed on the outskirts of the open space, 12 stalls come in three different sizes and unique graphic identities, chosen by the vendors themselves. This posed a significant challenge of creating clear design guidelines for the stalls' owners - rules which would not restrain the creativity of each brand, but at the same time result in a wholesome interior in its own right. The overall space must be a blank canvas for The Hague's street food scene, while remaining a signature Foodhallen venue full of unique character.

Contemporary features such as striking brass chandelier spreading above the bar and clear lines of the LED lights placed on the undersides of the beams add a dynamic graphic layer to the interior. Their stark rhythm, interrupted by a square layer of structural beams, emphasizes central position of the bar within the space. Hard materials and lines are alleviated by a warmer layer of loose wooden furniture and green plants. In comparison with the bustling ground floor, the upper level of Foodhallen has a slightly brighter and more organised feel. Here the landmark is a bold fountain bar made of travertine stone, turquoise oxidised copper and light-coloured terrazzo top. Strong vertical lines make the space optically taller, while the combination of mirrors and light imitates water running down the back bar. The floor of the upstairs space is made of wooden planks forming a geometrical pattern, once again merging into elevated custom seating elements. Existing structural elements such as wall piers are highlighted and celebrated by becoming a part of an abstract wall composition made of diverse lights, panels and finishes.

By using graphic lines, clear material palette and conceptual symbols, Studio Modijefsky has created the perfect modern indoor piazza. A versatile and inviting urban landscape filled with quirky features, perfect for any occasion. While Foodhallen concept prides itself on celebrating cuisines and flavours, it’s the new vibrant, intricate interior which will keep you returning.

Address: The Hague, The Netherlands 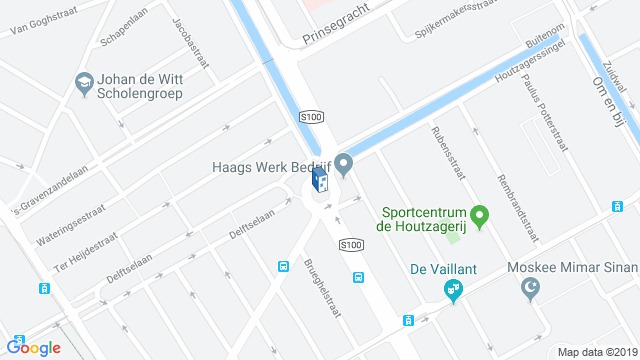 Location to be used only as a reference. It could indicate city/country but not exact address.
Share
Or
Copy
About this office
Studio Modijefsky
Office
•••