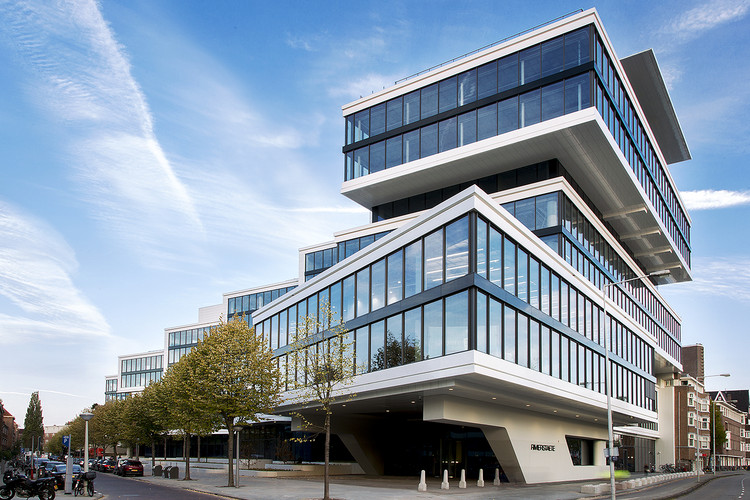 We reimagine a 1970s office behemoth as an icon for a new era. Rivierstaete is located in the Rivierenbuurt, in the south of Amsterdam. It’s a neighbourhood that is defined by the Amstel, the river that has played such a huge role in the city’s history, even giving it its name: ‘the dam on the Amstel’.

Over the centuries, artists and architects from Rembrandt onwards have found inspiration in the river. We followed suit, making it our aim to connect the Rivierstaete building to the Amstel and its surroundings – even though it had been detached from them before.

1970s landmark. The Rivierstaete building dates from 1973. A Modernist colossus, it quickly became known locally as ‘the monkey house’ (de apenrots), because of its piled-up, closed volumes. Designed by architect Hugh Maaskant, at the time it was Europe’s largest office building. Demolition and a new construction would have been the easiest option. Because of the special character and great potential of the building, however, the team decided to opt for renovation.

Opening up. In order for the building to better fit the context of the Amstel, it was pared back to the structure of the staggered volumes, while the pinched band of windows on the white-tiled façade was replaced by floor-to-ceiling glass frontages. The renovated Riverstaete finally opens itself to the surrounding Berlage district. This interaction with the environment creates a pleasant working environment and allows the outside world to glimpse the interior life of the building.

Planted roof terraces, which have been added at different levels, soften the hard edges of the building with restful greenery, thus reinforcing the connection between inside and outside. Together with the huge sky lounge on the ninth floor, with its spectacular views, these interventions have ensured that the building presents itself to its surroundings with an entirely new spirit.

Wellness wins. The demands made by office users have changed drastically since 1973. The design reflects this. The new open façade and the generous outdoor spaces ensure a healthy environment with plenty of health-boosting daylight, green spaces and fresh air.

The interior spatial quality has been greatly improved through the addition of continuous voids. These offer enormous flexibility for the building’s users, both horizontally and vertically. State-of-the-art technical installations guarantee optimum climate control and a high degree of sustainability.

Rainproof and responsible. Rivierstaete presents a green front garden to the neighbourhood, along with its roof terraces and roof gardens. These green roofs provide water buffering and retention, which means that the rainwater is easily drained and the building is ‘Amsterdam Rainproof’.

The new transparent façades let in a large amount of daylight. An advanced system controls the climate ceilings that are present throughout the building, as well as the energy-efficient lighting with its daylight control and motion sensors. The newest installation technology was used, including a thermal storage system for heating and cooling. This, together with the façades, with their highly insulated glass, ensures that the entire building meets BREEAM certification standards. 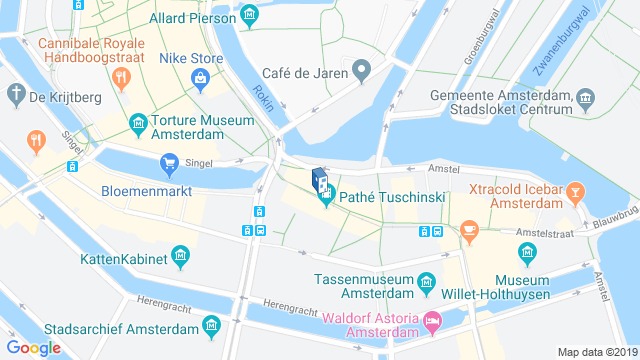 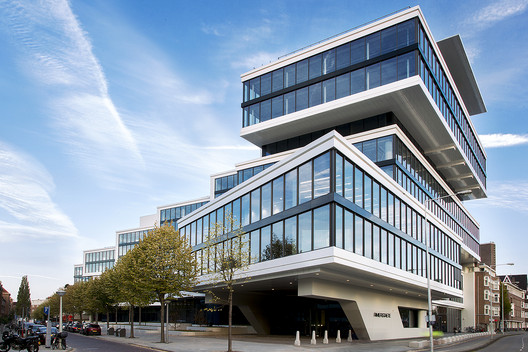