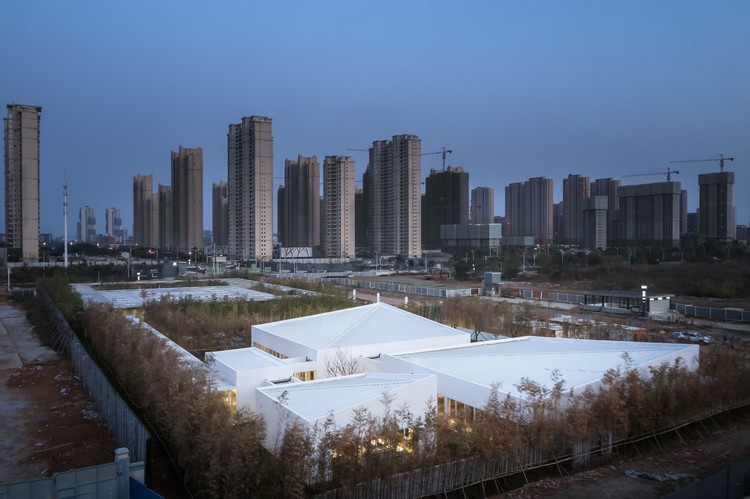 Text description provided by the architects. UAO has recently completed the phase Ⅱ of Optics Valley innovation world sales department; UAO is responsible for the integrated design of the project's architecture, landscape and public indoor area. Because of the integrated design, the indoor and outdoor integration of the project is perfect. The project is located in the new development center of Optical Valley in Wuhan. There is already a steel structure sales hall (phase I) in the site. Client's demand for phase II construction is to make a large box, which can accommodate the actual construction of 1:1 model room.

The first phase of the building is an umbrella shaped standard unit of 5m X5m. The starting point of the second phase of the project design is to continue the standard unit of 5mx5m. However, considering that the umbrella column is in the middle of the 5m unit, it will affect the space between the sample plates after splicing, so the second phase of the design only follows the basic unit module of 5m, and does not take the umbrella shaped structure form of the first phase.

In order to correspond with the architectural color of the first phase of the white school, the architectural color of the second phase is still controlled by white. In the initial stage of conception and sketch,The chief architect of UAO, Li Tao, formed the site logic with the plane of windmill model, so the advantage of layout is that it can form a series of visiting streamline; the plane of windmill type is divided into four parts: front hall, VIP hall, and two model showrooms. The four parts are separated properly. They form a central courtyard, which becomes the focus of vision.

In the first round of modeling design, the logic of 5m X5m is mainly emphasized, so the roof shape is designed as a combination of sloping roofs composed of many triangles. Each roof unit has different orientation and the same size (5m X5m). In the optimization stage, considering the construction logic of the large roof, we abandoned the repetitive modeling of the roof, and turned to pursue the space feeling of the normal point of view of ordinary people in the walking state.

Return to the perspective of people and the visual feeling of internal wandering to organize the design; such a design choice also brings the biggest feature of the project: it does not have a complete facade, that is, "losing facade ". As Colin Rowe said, " facade is never the top priority of modern architecture.". On the other hand, the group settlement composed of single unit is not exactly the way that Chinese classical garden has always used to move scenery. In this project, UAO finds a combination of Chinese traditional and modern architecture.

Therefore, the designer shifted the focus of the design to the courtyard and the interior space of the building, so as to achieve the integration of the architectural landscape and interior. The facade of the building is the natural result of the combination of building communities.

As a result, only one corner of the four walls of the central courtyard is closed with solid walls, and the others are made of ground-based ultra white glass to form a visual experience of mutual penetration. In fact, this "transparency" also brings the so-called "loss of facade - the lack of Facade" into a multi-level landscape with rich connotations. Use multi-level transparent frame to overlay and combine the space, from "transparent" to "translucent".

The landscape composition of the central courtyard, drawing on the four square parent elements of the building, uses white or black gravel and grassland to jointly create a minimalist expression; the cherry blossom planted alone in the corner of the solid wall will project the shadow on the white wall facade; using modernism to respond to the tradition of Chinese garden is the subject that UAO is studying and in-depth.

Each box gets a courtyard with the right view. Each courtyard is subordinate to the main view direction of the box, such as VIP's exclusive courtyard, which aims to enhance the VIP's sense of dignity; while the exclusive courtyard of the model room faces the south direction of the model room to the living room, which aims to get a greater sense of outdoor space. Once again, the advantages of integrated design of architecture and landscape are reflected: the language and style of landscape are highly consistent with architectural design.

The side courtyard between the box and the box is left blank, and the full lawn leads the vision of the inner corridor to the landscape tree at the corner of the courtyard; and at the location of each vision corridor, the landscape design has planted a proper tree. These views emphasize the sense of perspective for the observation in the cloister.

Considering the temporary nature, the structural form of the building is steel structure, and the large box of the exhibition hall in the two sample rooms is door type steel frame, and the ridge line changes according to the shape of the building. All materials of facade shall be controlled to be white, including white color steel tile of roof, white paint of exterior wall, white fluorocarbon paint of steel structure, white aluminum alloy window frame and ultra white glass, which shall be sent and fixed by UAO. In this process, the design unit first delivers samples; in the construction bidding, each construction unit delivers samples again; after selecting the construction unit, the construction unit seals the samples; if the samples are delivered three times, the selected materials are not likely to be misexpressed in the later implementation process, so as to achieve the perfect completion of the design.

The building and interior are also integrated design: in the architectural design stage, the specific positions such as the air-conditioning vent and the light direction are considered, so as to make rational use of the floor height of the building, and the 2.7-meter-high window is used as the control line of the indoor ceiling. In interior design, the floor, wall and ceiling of the public area are considered simultaneously, and the true space of the building is fully reflected; in turn, the space rationality of the building is verified by the interior design requirements, which directly avoids the waste caused by the secondary decoration. 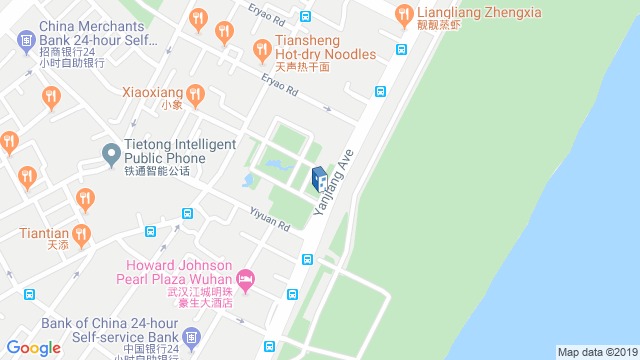 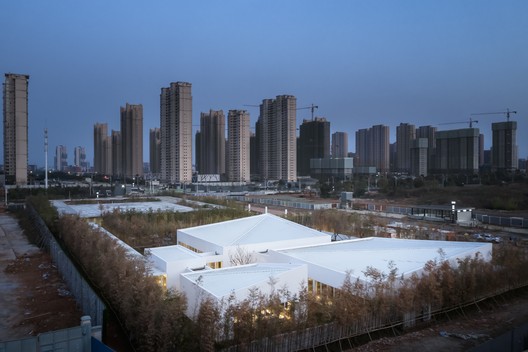