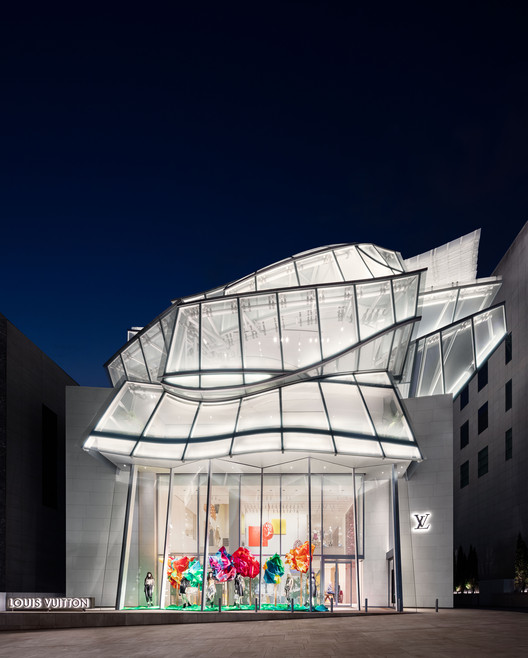 Situated in the Cheongdam-dong neighborhood of the Gangnam district, the building is Gehry’s first venture in South Korea. Known for his famous collaboration with the brand on the Fondation Louis Vuitton, their Paris art museum and cultural center, Frank Gehry created a structure that emphasizes the strong connection that LV has cultivated with the South Korean capital. Partnering up with American architect Peter Marino who designed the interiors of the project, Gehry found inspiration not only in his renowned shapes featured in his Paris intervention, but also in key elements of the historical Korean architecture “such as the Hwaseong Fortress, dating back to the 18th century, as well as the swooping movements and white costumes of the Dongnae Hakchum”.

What struck me when I first visited Seoul nearly 25 years ago, was the relationship between the architecture and the natural landscape. I still remember clearly the powerful impressions I had stepping up from the garden of Jongmyo Shrine […] I am delighted to have designed Louis Vuitton Maison Seoul, reflecting the traditional values of the Korean culture. -- Frank Gehry

Situated on the existing site of the original Louis Vuitton store, the structure’s front is entirely covered by glass, creating some sort of a “high zig-zagging vestibule and window, leading up to a series of enclosed terraces and culminating in waves of louvered glass panels”. Resting on a base of white stone, the construction has a strong sense of lightness. The building is connected through a “floating staircase”. First Floors include the men and women section, whereas the third floor “houses a private space and an enclosed terrace that can be used for intimate dinners and events as well as exclusive appointments”.

The interior spaces were designed with a Miesian rigor to more strongly emphasize the billowing energetic sculptural quality of Gehry’s exterior.  The interior stone flows in from the exterior. The dynamism of the rectangular volumes cleanly contrast with the baroque glass shields of the building -- Peter Marino.

The glass-topped upper floor will host Espace Louis Vuitton Seoul, an exhibition space, that is showcasing eight emblematic sculptures of Giacometti for its first exposition. Curated by Peter Marino, the many artworks and furniture presented in the store, generate a unique experience where visitors can shop surrounded by art, on all five floors. Some of these commissions featured in the building, include artworks by Mark Hagan, Marcello Lo Guidice, Brendan Smith, Luigi Mainolfi, Martin Kline, Harmony Hammonds, Bernard Aubertin, and Anselm Reyle, that “create bright fields of color strategically placed along the staircase and throughout the Maison”.