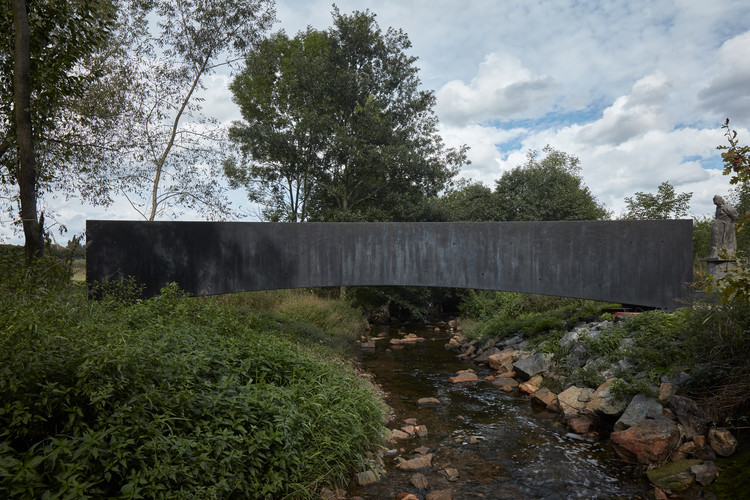 Completed in 2019, the concrete structure is part of a pedestrian trail from the village to the nearby cemetery. In fact, architects based their approach on a spiritual concept, imagining, therefore, a gateway between “the world of the living and the dead”. The design of the bridge is characterized by lightness and subtleness, in its contextual impact, massing and type of materials used.

Located in a particular natural context, full of geological discoveries and human interventions relative to the constant flooding of the stream, the black pedestrian connection fades in the landscape and merges with the scenery.

The delicate intervention was conceivable because of technological advancements, that made it possible to create a “freeze-resistant ultra-high-performance concrete (UHPC), grade C110/130, fiber-reinforced” material. The 3.5 tons bridge is structurally stable in both directions, mainly because of the double-curved geometry of the project. Before any construction works started, a prototype was built to test both the structural design and the concrete casting technology. A pigment added into the concrete mixture gave the bridge its dark color.

Leading expert on “baroque sculptures placed in the context of bridges and landscapes”, Jan Hendrych has integrated one of his artistic works “The Guardian”, in the context. Part of the whole composition of the space, the sculpture placed opposite to the bridge, comes as an integral entity of the project. In fact, the architects generated a space that embraces both the architectural structure and the artistic figurine.