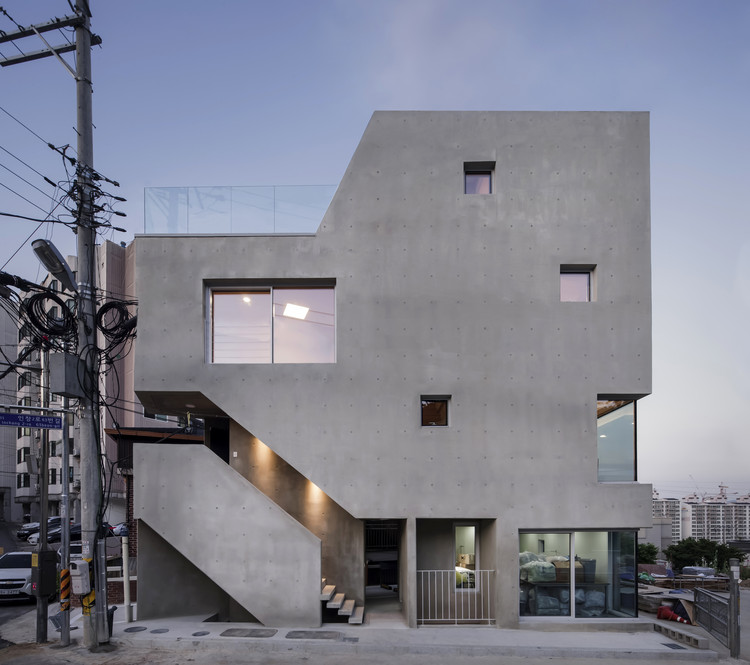 Text description provided by the architects. The condition of the field is one of the most important variables of the project. Even if it is a good looking field in the exploration, it is rare for an architect to understand the limitations and limitations behind it, draw a conservative base of architecture on it, and then buy the field and proceed with the project. This is especially true for small-scale housing or commercial housing projects where the psychological pressures of time and expense.

Coupled with clothing design, sales and the upbringing of two children, the couple chose to build a house to realize what they called a life close to work, bringing together a life and work area that had been located quite a long distance apart. The field we looked at was a village on a hill in Guri, Gyeonggi Province. The triangular land, which was only measured by the number 95 square meters (28 pyeong), looked quite large thanks to the adjacent vacant lots, and it seemed that the area of maximum floor space that had been passed on to brokers would have secured a family home, a couple's office, and even a rental space.

I was busy signing a land contract, and I found an architect. Contrary to expectations, however, restrictions on the height of the sun's rays in the north and the public notice on the large area (more than 1 meter apart) were strongly restricting the securing of the upper floors and the use of the land, and considering separate underground entrances that were required, two parking surfaces, and psychological distance from the adjoining next door, the actual area and available land are few. In the end, the theme of the project was to find the maximum area and optimal conditions of the residential space, which had been tight even after giving up the rent.

The family's living space (second, third and fourth floors on the ground) tried to find a morphological concept suitable for the land of the triangle, even though it contained all the conditions of any single house. Using the design motif of the line of limit indicated by the limit line of sunlight in the north direction, Oroot entrusted the upper form of architecture to the legal boundary and applied the tension of the line to each part of the building. From the four-story volume enjoying terraces, to the two-story tear in the stairwell leading up to the front door of the housing department, to the stairwell leading below it, the limits of the area have been converted to the starting point of form. To maintain the concept of a clear line, and for the architect's wish for a plain texture, all parts surrounding the line were planned to include only exposed concrete and windows.

With a small Pilotti that can be passed over to the parking lot when approached by the long side of the land, a gap in the oblique and a few cantilever steps naturally lead to the second floor of sight and movement. On the second floor, there will be a living room with an exposed concrete wall that runs up to the inside, a dress room used by the whole family on the third floor, two bedrooms, and an extra room and a bathroom with a roof on the fourth floor. Considering the wide roads and adjoining adjacent buildings, some important windows are maximized for light and ventilation, while others are compacted and arranged in accordance with the rhythm of the copper. The outer walls of exposed concrete buildings are secured while maintaining privacy.

The couple's workshop and exhibition hall, and the section of the shopping area (underground, ground floor) that includes the conference room and warehouse, were designed to optimize the area and environment of the underground space while ensuring that the draped fields would not cut off communication within the earth. It split the space on the first floor into two, giving a breathing room between the back-to-back Piloti parking lot and the road in front of it. As a result, the space located in the narrow part of the triangle played its own role by setting up a function room, such as a small toilet and boiler room, a large part as a work room and office, and a passageway as a Piloti port. It also opened the lower slope of the main stairway leading up to the house for access to a separate basement floor, leaving another gap heading under the ground. In the process, the railing retaining wall of the main stairwell grew to the lower part, and as if it were a railing lowered from the ceiling, it secured the safety of the opening part and omitted the addition of iron for the railing. If you walk down the stairs, you will see a small sunken in front, and if you enter the basement with the sunken on the right, it will lead to a work room and a meeting room, enabling light and ventilation through the sunken in every space under the ground.

The various conditions of the earth are like the nature of being born, and there is no flawless writing without any constraints in the building project. Slit House is a house that was created in the process of building by embracing the form of land, the laws applied to the land, and the architect's hopes of looking at the land calmly. This shows that the house's never-usual form has emerged naturally based on the most basic nature of the earth. 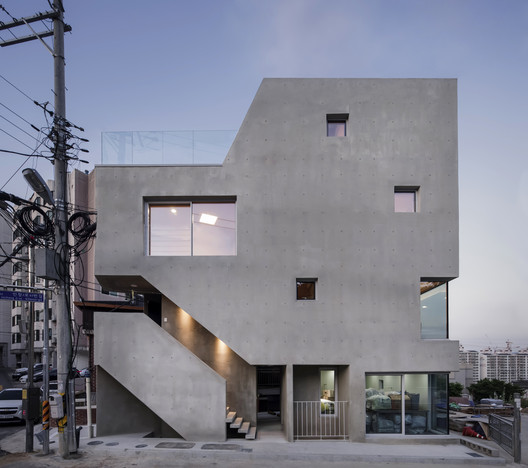