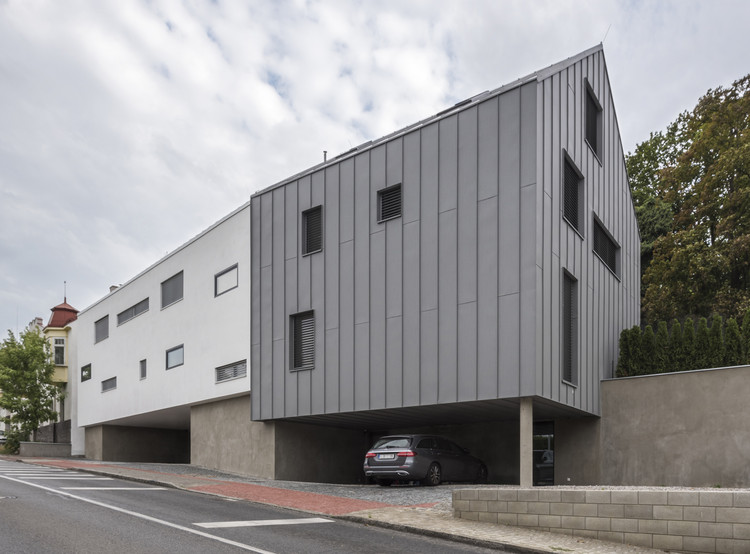 Text description provided by the architects. When designing the set of three family row houses in the village-like context of Liboc in Prague 6, our aim was to pay particular attention to the local context and define a volumetry and a choice of materials that would refer to traditional architecture of the surroundings as well as to the specifics of the plot. The trio of family houses is set in the existing context along Libocká street in this historical part of Prague, formerly an independent village.

To the east of the new building, there is a row of houses of the original tissue that strictly respects the street boundary line. To the west, the plot is adjacent to a sloping road leading to a former cemetery at the historic Hvězda preserve, which is neighbouring the plot on the south side. Behind this road, a more expressive recent villa is located, considerably retreated from the street line and with dominant corner. The plot is sloping steeply to the north resulting in a configuration where the entrances from the street level are one floor below the garden, naturally separating public and private exterior spaces.

The simple white volume which strictly follows the street boundary contains two of the houses, its length along the street reflecting the typical plot width of the old village, while the end section clad in grey aluminium turns away to reflect the neighbour, and its exceptional position means that it contains a larger home of the client himself. Although the volumes and materials are referring to traditional architecture, they are interpreted as a simple and modest homogeneous mass with minimal detailing. All three houses are distributed on four levels, the lower one being in contact with the street, while the second is open to the garden.

The bottom floor is set back to give a feeling of lightness to the simple monochromatic volumes above. The parterre of the entire building is structured by two blocks containing staircases; the rest of the ground floor is set back significantly below the main mass of the building. In this way the volume allows the extension of a very constrained street profile, but at the same time the historical street boundary line, as well as the height of the roof cornices and ridges are firmly held. Service areas of the house are located towards the busy and noisy street on the north side of the house, which (along with the energy concept - the building is designed in passive house standard) logically implies a lower fenestration of this facade.

The interior design of the houses aimed to attain overall simplicity, clarity and functionality of the spaces, and with a moderate choice of materials - concrete, white plaster, oak wood and white painted furniture surfaces we tried to achieve unity with the external appearance of the buildings, as well as with the exterior spaces. The two houses that form one architectural volume from the exterior were inside also treated in a similar manner, with the predominant monochrome tonality and rather austere detailing.

The third, significantly larger house for the family of the client offered the possibility of a different solution, including a more dramatically shaped staircase which plays the role of a hinge – an articulation of the building where the entire volume bends –, wooden wall sidings and visible concrete surfaces complemented by built-in furniture in a combination of white lacquer and oak veneer. In addition to the overall concept of interior design, all built-in furniture was designed and appropriate free standing furniture was chosen to supplement the final appearance. The client´s contemporary art collection was also an important aspect of the interior design. 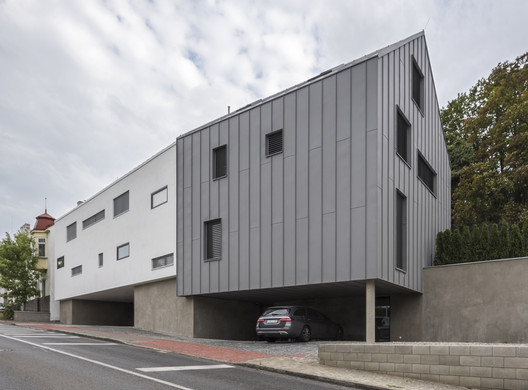