Save
The Cave Bar / Qing Studio 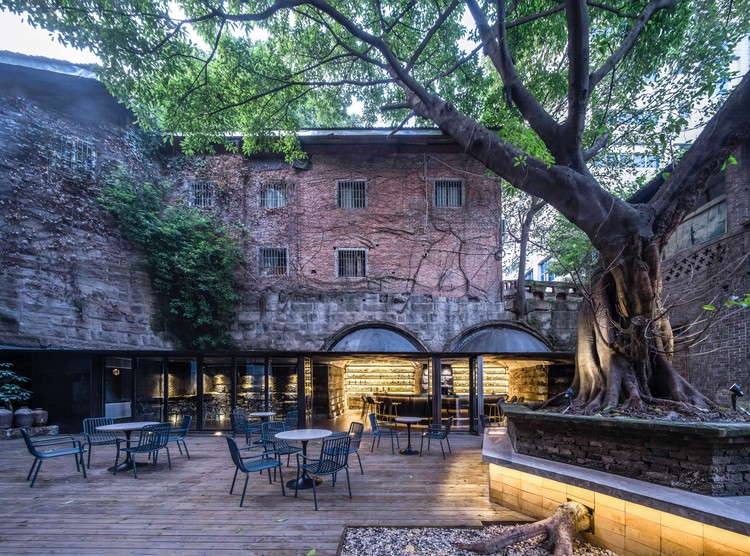 Air-Raid Shelter
"Chongqing is a city full of air-raid shelters... When the hot pot is combined with the air-raid shelter, the biggest feature of Chongqing would be created..." The movie "Hot Pot Hero" has portrayed the spectacle-style dining space of "air-raid shelter hot pot".

During the Anti-Japanese War, Chongqing military and civilians excavated the world's largest air defense engineering network, covering an area of more than 1.5 million square meters. According to the statistical archives of the Air Defense Command, in 1937, there were 54 air defense and shelter facilities in Chongqing, which could accommodate 7208 people, accounting for only 1% of the registered population in Chongqing. Since 1938, Japan officially bombed the urban area of Chongqing, and the National Government has accelerated the construction of air defense works. By 1942, the number of air-raid shelters in Chongqing had reached 1,603, with an average of 178 air-raid shelters per square kilometer, which could accommodate all citizens.

Today, the mountain city and bomb shelters remain, but the fighting is over.

Chongqing's unique “air-raid culture” began to integrate into the people's life: in the era of no air-conditioning, the 4°C air-raid shelter was sanctuaries for the cool and retreat; then, the rock-and-roll youths also came with musical instruments; entering the 21st century, the city government made full use of the original air-raid system when building rail transit, and then led to the implantation of more public functions. The air-raid shelters were transformed into underground shopping malls, hot pot restaurants, museums... while those small ones have been changed into hardware stores, canteens, community cool spots... By 2019, the utilization rate of civil air defense projects in Chongqing's main urban area has reached 91%.

The factory is located at the end of the Loquat Mountain Back Street. A total of eight buildings in the factory area are combined with three courtyards along the mountain.

The first and largest yard is the parking. The surrounding multi-story old factories have been stationed by various independent art studios. The mottled red brick walls are decorated with dazzling glass and black steel. The solemn revolutionary slogan paired with trendy graffiti and signboards, this is the atmosphere of a typical renovation project.

Along the mountain road, it is the second narrow courtyard enclosed by two old staff quarters. They have been transformed into a gorgeous river view hotel named "Mountain Ghost", which has not much nostalgia for its own historical identity. “He” proudly displays “his” superior "Face Score" in this slightly dilapidated old block.

The north side of the hotel is the location of the project: the third courtyard enclosed by the old staff quarters, bomb shelter and former residences of the Sichuan military star Guo Xunqi. It has been redeveloped as a backyard of the "Mountain Ghost Hotel".

Yard
On the east side of the yard is the former residences of the Sichuan military star Guo Xunqi, which is a cultural relic-protected building built in 1934. The first floor of the old staff quarters on the south side has been transformed into the restaurant of the "Mountain Ghost Hotel", which is also the main entrance to the backyard. The north side is three small air-raid shelters, but the easternmost one was blocked by the former residences of the Guo Xunqi. In the center of the yard is an old banyan tree with a canopy that fills the entire yard.

Faced with such a small area, and the center is occupied by a huge tree pond, put the bar at the north end of the yard is almost the only choice, to make full use of the most characteristic elements in the courtyard.

The three air-raid shelters are not connected to each other. Each floor space is about 4m*4m, and the arch is only 2.1m away from the ground. How to develop a space suitable for the bar is the focus of the design.

Firstly, a 2.5-meter-wide front porch was added to connect the three air-raid shelters, but the plan is more like a series of cubicles connected by a corridor. To eliminate this state, we use a semi-circular desk to spatially “bridge” two of the air-raid holes, to make the bar plan become a radioactive space centered on an old stone wall, thus strengthening the overall sense. However, such a layout leads to smaller operation space, so the wine rack cannot be placed behind the bar as usual, but is placed at the end of the bomb shelter to form the background wall of the bar.

1/4 Sphere
In order to connect the vaulted roof to the flat roof of the new front porch, we control the height of the front porch at the arched foot and use a 1/4 sphere to connect the wall, so as to realize the natural transition between the old and new parts in the external form and internal space, respectively.

The main beam adopts 100mm*100mm C-shaped steel, and the other beams and columns are uniformly made of 50mm*40mm square steel pipe (the column is welded by five steel pipes into a cross column), which is the only small scale structural material in the nearby building materials market. The roof and the bottom of the roof are both 5mm thick galvanized steel sheets. The external drainage ditch is tilted outwards to ensure that the height of the cornice is only 35mm. The track of the folding sliding door is hidden in the C-shaped main beam to ensure that the continuity of the indoor and outdoor roof bottom is not interrupted by any member. The spheres that connect the flat roof and the vault are also perfectly presented indoors, but the inner wall material is replaced with mirror stainless steel, It re-projects the distorted image of the wine rack, making the indoor atmosphere more and more blurred and illusory. 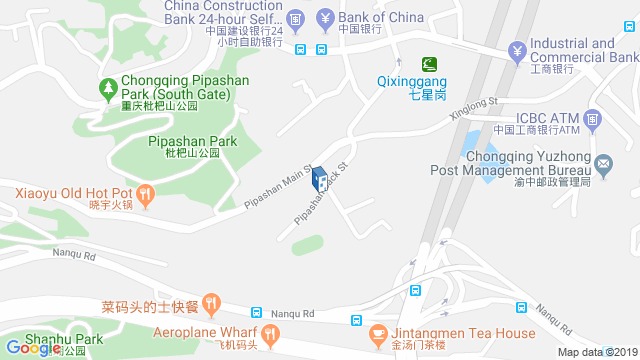 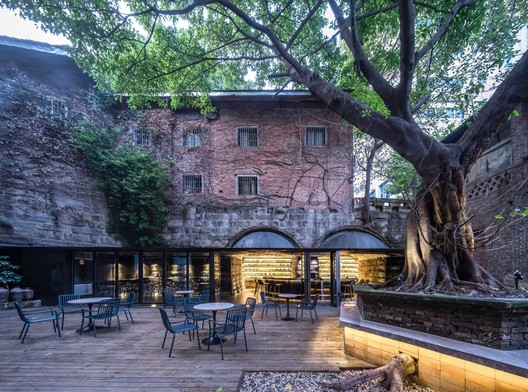