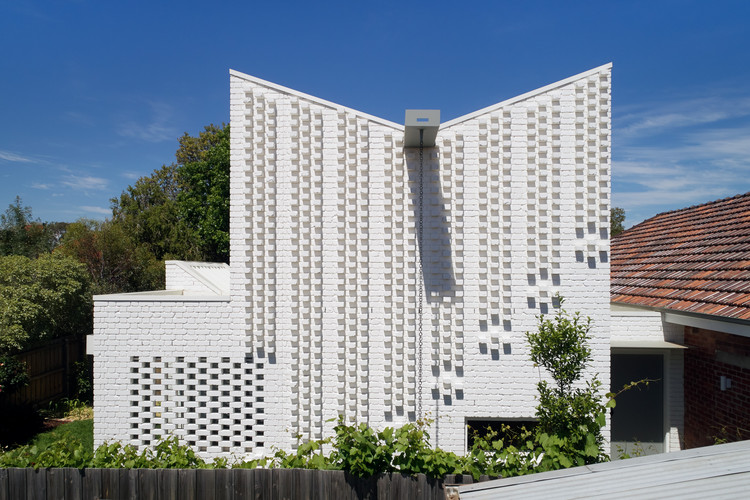 Text description provided by the architects. This is a project for a young family of four. At its core, it explores two themes - "identity" and "what is enough?". As recent immigrants, this project is strongly shaped by our client's cultural background. Growing up they were surrounded by brick architecture, which has an extensive history in South Asia. It's chameleon-like ability to be skin, brise-soleil, thermal mass, ornament and monumental - are the reasons it almost entirely covers the new addition. The project allowed us to explore a bigger conversation - how to change the typical suburban approach to a brief. With Australian homes being the second-biggest in the world, it's time to re-think our approach to suburban homes. Too often we are asked "How much space can we get?". We wanted to flip that on its head with "How much space do we really need But changing the question, we ended up with a built volume nearly 70% smaller than what local regulations would have allowed! This "think small" approach was one that was informed by the original home and driven by the clients.

Built during the second world war- at a time of material shortages- it is austere and originally had only 4 rooms in total. Along with a large backyard, this was considered adequate for a typical family of four. Whilst austere on the outside, the home had flashes of exuberance internally that was loved. Inside were ceilings filled with radiating art-deco motifs and hand plastered lace-like walls. We wanted to extract these hidden moments of joy and bring them outside. Hence, we super-sized a slice of the Art-deco ceiling onto the western elevation using corbelled brick details and a Flemish bond pattern. This facade of the extension is intentionally quite solid to provide thermal mass, but due to the larger side setback also ends up being the 'public face' of the extension. By choosing a white painted finish, we were able to choose a cheaper grade of brick highlight the texture and movement of light across this brick facade during the late afternoon.

The other key element is the prominent roof forms. What started off as a playful inversion of the existing ended up being a celebration of the most functional role of a roof -to provide shelter by re-directing rainwater away. This function is rarely expressed and usually hidden. We chose to make this evident through the rain-chain and with an oversized projecting gutter - which is where the name Cascade House is derived from. The clients love gardening and their proximity to a local creek; their brief was to feel surrounded by foliage and have an element of water in the design. It is a home wrapped by a wall of the landscape on three sides and minimal paving so that the site still remains 50% permeable to rainwater and minimizes any urban heat island effect.

The design creates little moments of delight- the changing light of day and a feeling of expansion (in spite of being in the inner-city). The brick bris-soleil creates a moving pattern of sunlight that rises from the table to the wall and provides a visual shorthand for the time of day (like a sundial). The main bedroom fenestrations are such that when lying in bed, all one sees is a slice of sky.

The end result is a home where the spaces are modestly scaled but possess a richness in detail that conjures delight and provides a joyful backdrop to family life.