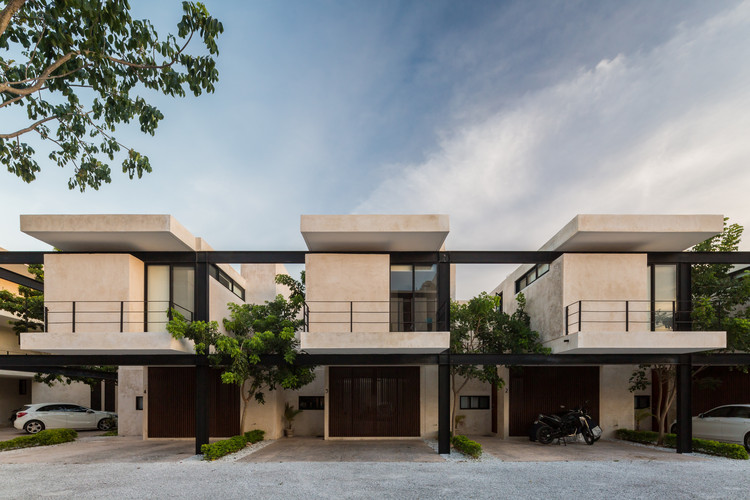 Text description provided by the architects. Given the growing demand for people who move to Merida looking for a better quality of life, real estate developers have generated an excessive supply of developments that respond exclusively to financial needs and the needs of the market.

On a regular lot in an intra-urban residential area, we are commissioned to develop a heritage real estate project, generating the largest possible number of salable units.

The orientation and location of the property and the freedom of the client to "propose" the most favorable typology, led us to a pinwheel-shaped compositional scheme, which orders four habitable blocks that rotate according to their needs and uses and allow a flexible project that can be built in stages and that responds to the financial flows of the investor.

The first stage or block was planned for small families of three members and is resolved in two levels that adapt to the urban scale and relate in a linear and perpendicular manner to the street, which marks the access to the project, opening to the north and leading the user to the second block.

The second and third blocks turn counterclockwise in order to look for the best orientation and to connect with the context while having greater height and still respecting the scale of the area. These buildings offer three types of housing focused on newly married couples, single adults or university students.

The last block rotates as well, placing itself parallel to the road in a volume of one level, which takes the scale of the immediate surroundings, generating an open trade towards the street, offering a tree-lined square to the city and a common rooftop for users of the building and the community.

Always understanding the real estate nature of the commission, the project is carried out as a formally pragmatic and local project, modulating everything in structural axes of 60cm, attempting not to exceed clearings greater than 4,8m in length, in order to be able to use the traditional building system of blocks, joists and vaults. For the final finish we seek to use a simple material; a flat white powder that evokes the local colour of the earth and which in turn is of low maintenance and reacts to the passage of time with dignity.

The formal expression of the project takes form as a sequence of spaces that serve and are served, expressing their will and generating closed volumes for services and circulations as well as horizontal and open spaces for living areas.

The end result is a project that meets three premises: Maximizing the performance of the investor by offering a flexible and gradual project which densifies its area to generate the greatest amount of salable square meters. On the other hand, we offer diversity, generating different typologies that adapt to the user's spatial and economic needs. And finally, we seek to integrate the project into the city, through commerce and the common square, generating an inclusive and outward-looking project that generates cultural diversity and encourages neighbourhood coexistence.