Save
Deokhyeon-ri House with a Cafe / On Architects Inc. 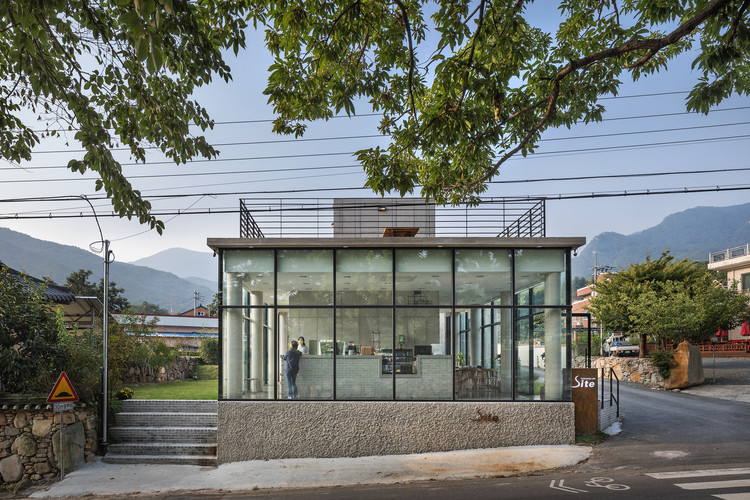 Text description provided by the architects. This project dealt with the dilemma of how commercial residential buildings on the periphery of a city center, should relate to and coexist with existing rural villages. The client wanted to move to the outskirts of the city and build a house that would also be his own cafe business in order to prepare for life after retirement. Even though Ulsan is a metropolitan city, its size and infrastructure are still relatively unimpressive. Despite having the largest land area among Korea's metropolitan cities, there are actually many 'eup' and 'myeon' villages in the country. It has become common for retirees to move away from Ulsan's suburban areas and actively engage in economic activities where they are newly settled.

The site is located on the corner of the village entrance road, which is facing the national highway leading to Seoknamsa Temple. On the other side of the road are the village guardian tree and village pavilion. Existing houses in the village are all single-story buildings, maintaining a peaceful landscape. We wanted to highlight the potential for region regeneration by constructing a serene piece of modern architecture that would serve as a small house and cafe business for the client.

The central concept concerned the relationship between the two programs. We wanted to build as if building a village, making the two programs as individual elements that formed a village. The commercial space was treated as an invisible element that does not exist, making the cafe an open space in nature. Considering the site's location next to the national highway, the barista's area was structured like a show window so it could be seen in passing vehicles. As for the residential, area the proposed house was closed off to the outdoors in order to secure privacy from the commercial space. And in the open space is a closed light courtyard, while in the closed space is an open light courtyard. We created point-like objects to establish a relationship. The material properties of these two contrasting materials relate to each other through the water element placed outdoors based on differing land levels and become a part of the village.

The architecture is constructed only with concrete, glass, water, and wind, that is, physical and natural elements. The exposed concrete of the house seen through the cafe's open folding doors, the light that reflects off the water, and the movement created by the wind running through these spaces was a suggestion for exploring possibilities of a most simplified space.