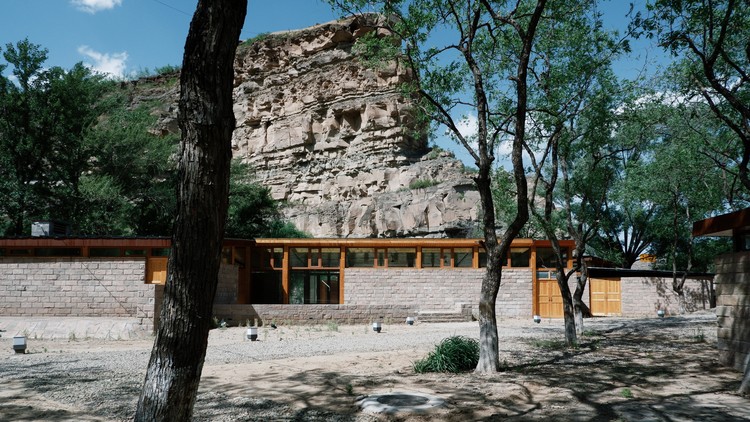 Text description provided by the architects. With the decline of Yellow river transportation in modern times, the glorious cave-dwelling village along the precipice in Northern Shaanxi has become a remote place, desolate and lonely. In recent years, the construction of the highway along the Yellow River has ushered in new opportunities for these ancient villages. The design of the "post station" along the road not only facilitates road traffic, but also becomes the "antenna" of the old villages and the "gathering place" of urban and rural life. How to satisfy and activate the multiple functions of urban and rural areas and create a natural contemporary settlement of one side by taking advantage of the situation of mountain forests has become the design goal of this new building type.

An ENLARGED POST STATION
From the point of government, the construction of the "post station" along the road is intended to provide a complete set of traffic and tourism services for the villages along the Yellow Road, including three basic functions: parking, shop and a public toilet. However, the old village reserve are short of land, The villagers of Nihegou have been hoping to build a grand stage square and a Wedding and Funeral Banquet Hall with 200 people in the jujube forests, so as not to interfere with the life of the village.

In the face of the differences between urban and rural areas, with the opportunity of "post station" construction, the service spaces with complementary functions are concentrated outside the old villages. The functions are enlarged to restaurants, teahouses, stage squares, banquet hall, and even temporary jujube Market. It becomes the remote tentacles of the Nihegou village, and also a gathering place for rural public life. In Nihegou, a traditional village with the world's important agricultural and cultural heritage (GIAHS): "Jiaxian ancient jujube garden", many functional building spaces will undoubtedly become a new type of public buildings in the village. How to slightly place this "enlarged post station" among the jujube forests with different village entrances and build it naturally has become the primary problem faced by the design.

DISPERSED BUILDING
On the side of the road along the Yellow Road, there is only one jujube woodland near the new road. From the highway to the edge of River, there is a step-like drop of nearly three meters, while the newly built flood control dike along River has a height difference of four meters, in order to prevent the mountain flood outbreak in summer and autumn every year. The uneven jujube forest in the base is the main economic crop in the village. Every jujube tree has its own owner. The identification and compensation of the land are also based on jujube. Ulmus, poplar and other trees on the edge of the jujube forest are also important guarantees of village biodiversity. In this regard, it is the preferred strategy to disperse the building space in the forest by taking advantage of the topographic elevation difference and the spacing between trees according to local conditions.

The planning and design of the station starts from the measure land. To avoid the southern jujube densely populated area and the Guanyin Temple conservation area, to maintain the natural atmosphere of the jujube forest in the village, the main building of the station should be placed on the sparse side of the north jujube forest, and next to the Shishan cliff under the bend of the river near the village. The height difference between roads, forests and river embankments is wide and narrow, so that the buildings can enter and be built by trees. The buildings can be reduced to basic space units along the curve, so as to weaken the volume and disperse it among jujube forests. Building natural contemporary settlements among the forests not only preserves the origin of the village entrance, but also obtains another small world.

A Country garden
In Chinese gardens, architecture is a typical unit type. The main structure follow the basic form, and its relationship with the path, place and situation is more important than building itself. How to borrow the ingenious way of dealing with Chinese gardens in the construction of rural venues, and effectively integrate the actual demand of local technology and lower cost?

For this reason, light steel frame and local characteristics of stone wall and willow weaving technology are selected to reduce the wall height, leave high windows, lighting and ventilation, and can be incorporated into the forest landscape.

Their unitary volume is not only scattered among the forests, but also partially aggregated due to their behavioral functions, which has become a new experience mode of rural garden space in jujube orchard.

BETWEEN GATHERING AND SCATTERING
The square was transformed into a staircase base on the original jujube forest concave land, and the building monomer space was gathered to cater for the steep Golden Lion Mountain. All rooms are open to the inner theatre stage, but because of different functions, there are different space atmosphere. The main hall connects the kitchen with a South skylight and bright light; the elevated tea room is surrounded by trees, facing the stage square, with the darkest space; even the small windows of the management room ensure the comfort and convenience of the office space.

Similar to the "Six Persimmons painting " of Muxi in Southern Song Dynasty, the six persimmons with different virtual and real are placed on an invisible and boundless plane, seemingly scattered and implemented at random, and seemingly gathered meticulously. The overlapping or gap differences between them bring many subtle imaginations.

Relative space gathering and dispersing, time and behavioral reincarnation may be a more real daily life in the countryside. Most of the days in the countryside are quiet and repetitive, and the square provide the leisure sitting and watching of the main road at the village entrance. When festivals or other events come, villagers gather in the Plaza. The huge cliff seems on screen, with the singing, inspiring their mood of worship. This is an important moment for village cohesion.

In the face of mountains and rivers, or joy or sorrow, this gathering ceremony is rare in the long days, but even more indispensable in the ancient villages. The jujube orchard Post Station scatters among the forests in the settlement space, quietly carrying the gathering and scattering of the ancient village life. 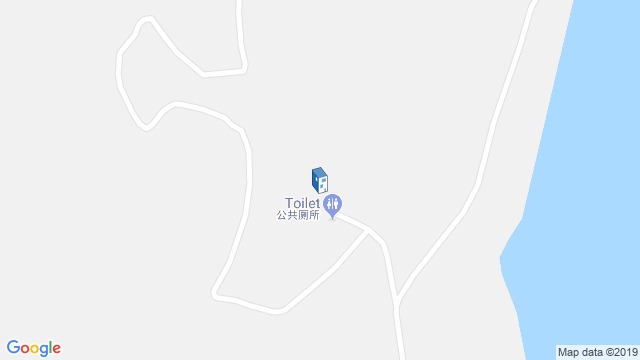 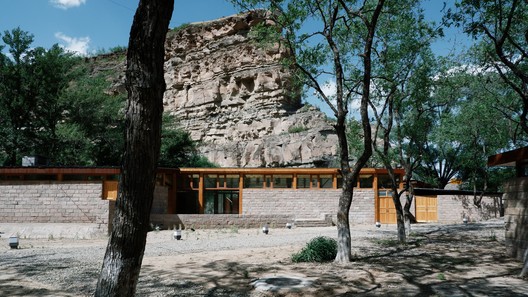