The Times Square Alliance has announced that Heart Squared by MODU and Eric Forman Studio is the winner of the 2020 Times Square Valentine Heart Competition. Curated by Cooper Hewitt, Smithsonian Design Museum, the competition celebrates its 12th anniversary creating proposals for a public art installation celebrating “Love in Times Square” during the month of February.

Tilted in various directions within a steel frame that evokes the outline of an anatomic heart, the 125 mirrors of Heart Squared transform the spectacle of Times Square into kaleidoscopic images of people, buildings, and brightly-lit billboards. As the team states, they developed a specialized technique to calculate the specific mirror angles in order to hide a “playful surprise.” As viewers move around the structure towards a special marked location, those hundreds of reflections suddenly coalesce, revealing a pixel heart of urban life surrounded by a field of mirrored sky.

Viewers can interact spontaneously with one another through the mirrors or find their own experiences within the piece. Intended to bring people together, the sculpture’s colors and composition change as the sun rises and sets, as billboard lights and screen shifts, and as people pass through the space. “Heart Squared represents the collective heart of the city and as such, is an engaging civic statement about celebrating our differences and bringing people together in a fundamentally inclusive way,” said MODU. “We are using the magic of mirrors and light to remix the urban spectacle into something unexpected, to give people a new way to see the city — and each other,” said Eric Forman Studio.

As this year’s winning design, Heart Squared will be unveiled on January 30 at 11am at Father Duffy Square, between 46th and 47th Streets. The installation will remain on view for the month of February. More information about the project is available at TSq.org/heartsquared. 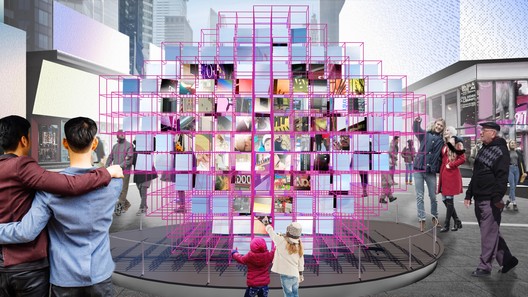