Text description provided by the architects. Traditionally large and thick as if to express force and power, the walls of the Courthouse in Pointe-à-Pitre evoke openness and transparency. In this way, the building challenges the ice-cold popular image of courts with an apparent warmth, an immediate readability of its forms, and a liberation from the authoritarian codes of judicial architecture.

Built in continuity with the urban fabric and the principal alignments of the city, the Courthouse adapts to its relationship with other buildings in Pointe-à-Pitre. The colours used in the project come from the chromatic environment of Pointe-à- Pitre and in particular from the Prefecture building that faces it, while the varying light reflecting from the aluminum sun blocker comes from the sunshine of the Caribbean sky. The feeling of lightness evoked by the building also seeks a proximity with many other buildings in the city, where the finesse of the balconies, colonnades and awnings make for a remarkable sense of identity.

«Open to the city, displaying the transparency of its function, embodied by three courtrooms that can be seen from the street, the Courthouse reveals itself to the gaze, without being fully naked. The modesty of the judiciary, associated with its statutory restraint, obliges it to respect more intimate surroundings and to set aside curiosity. »

Beyond its volumes and lines, the strength of the architecture owes itself to the choice of materials, through which a certain idea of the building is organically expressed. The materials, thanks to the effects they evoke to the gaze and in terms of physical sensations, express the will to establish a sense of justice that is neither remote nor cold.

The building is constructed with a reinforced concrete frame with a rigorous geometry that ensures a perfect continuity of the roof with the infrastructure, to ensure the transfer of seismic stresses to the foundations. The plan is structured by a spine that houses the vertical distributions (dedicated to the public, magistrates, detainees and prisoners) and fluid pathways. This framework is completed by a metal framework covering the large public spaces: courtrooms and public lobby.

The façades ensuring the envelope are load bearing in order to contribute to the bracing. Composed of reinforced concrete alternating with aluminum window frames forming a tunnel, they meet the building’s fundamental objectives: robustness, waterproofing, and modularity, in order to ensure the reversibility of the spaces. A large climatic shade mesh completes the system, providing sun protection for all surfaces of the building (glazing as well as walls and roofs) while offering passive control of the light intensity. This makes it possible to drastically reduce energy consumption. It ensures intimacy for the interior spaces vis-à-vis the busyness of the surrounding streets, because the building cannot benefit from any setback. Finally, it protects the glazed surfaces against shocks in the event of violent cyclones.

The choice of aluminium in an anodised coloured finish for this shade mesh is a technical as well as an aesthetic one. Here, all coloured pigments of plaster, cladding, or bodywork fade quickly due to both the aggressive ultraviolet light and the saline air. Aluminium with an anodised finish was chosen above all for its unalterable chemical nature, combined with the necessary precision of a prefabricated modular implementation 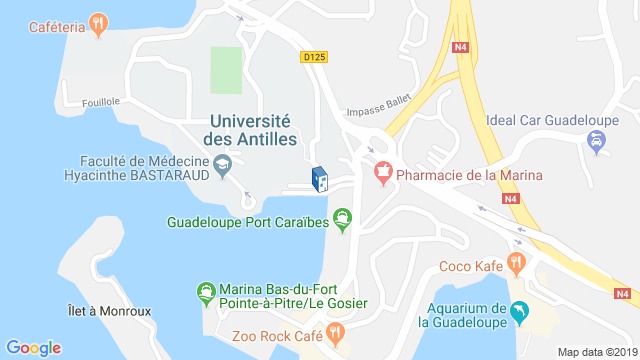 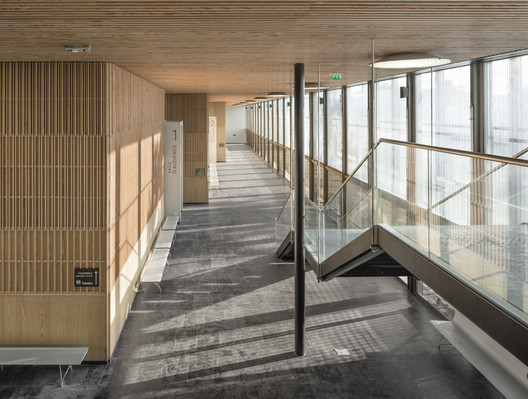