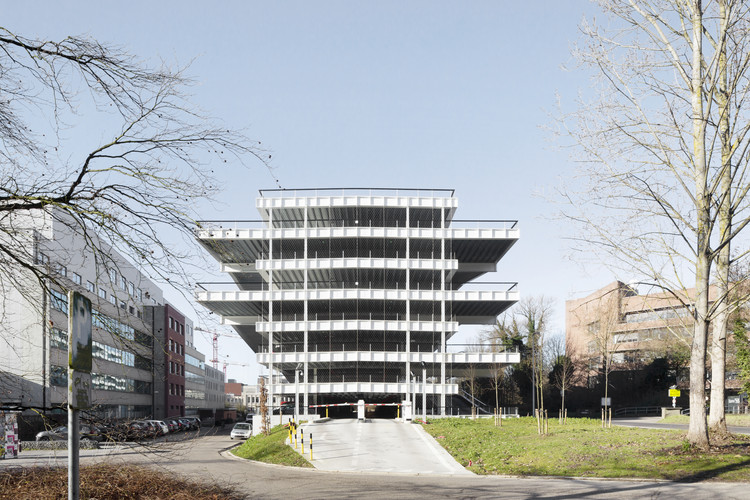 Text description provided by the architects. There is a new multi-story car park on the Arenberg III campus, between the IMEC site and the KU Leuven Computer Science building. The IMEC and KU Leuven sites each have their own urban-planning logic. On the south side of the Kapeldreef lies the site of the KUL, where the buildings have been erected in a strictly orthogonal manner, not parallel to the Kapeldreef. On the north side, there is the cluster of IMEC buildings, a cluster that grew more organically.

The car park has been placed parallel to the Kapeldreef, the road it connects to directly. The car park will be used by both parties and as a result, will be put into service in this way. It is an intermediary between both parties, an interchange that serves both. The car park replaces parking spaces on the ground level with stacked parking spaces. This ensures reduced land use.

The design is a narrow and long building that opens up the Computer Science building behind it, which creates space for planting trees and which manifests itself towards the Kapeldreef, along with which employees and visitors enter the IMEC and KUL sites. The building has eight stories above ground (7 levels + roof level). There is room for 740 cars in the car park and for 210 bicycles in the bicycle shed. In the area between the car park and the Computer Science building, clusters of trees have been planted that act as a natural filter between the building and its surroundings.

On the higher levels of the car park, the crowns of the surrounding trees and those on the other side of the Kapeldreef form the backdrop for the car park. The building is constructed as a linear car park with the ramps located on the outside of the north façade and three circulation shafts on the south façade. The slopes of the 142-meter-long façade along the Kapeldreef ensure an expressive character and a dynamic image.

STRUCTURE AND MATERIALITY
The architecture has been reduced to its essence. It is an open steel structure that engages in a dialogue with its surroundings. It does not hide its function. The ramps carry over three bays (22.5 m) between the horizontal planes that make the connection with the parking levels. The span of the ramps has been achieved with HEB800 profiles that also make up the façade finish of both the ramps and the ends of the building. The floor plates consist of profiled steel-plate concrete floors that have been left visible on the underside. Lighting, detectors, and signs have been placed between the profiled plates. The top side of the parking levels has been finished off with polished concrete and, on the ramps, ribbed concrete. The shafts are covered with mirrors. The construction is largely demountable.

SUSTAINABILITY
Thanks to the solar panels on the roof, the car park is entirely energy-neutral. The panels provide the electricity required to operate the ramp heating (only at freezing temperatures), the lighting, the lifts, and the parking guidance system. 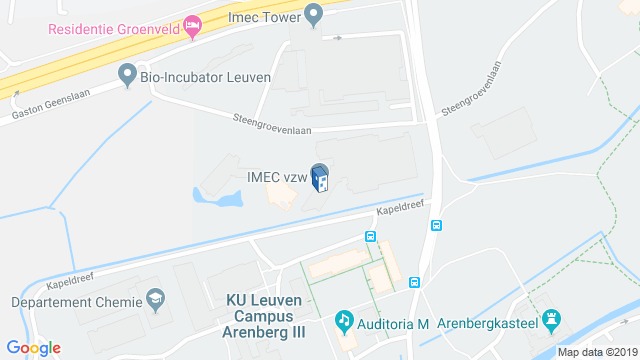 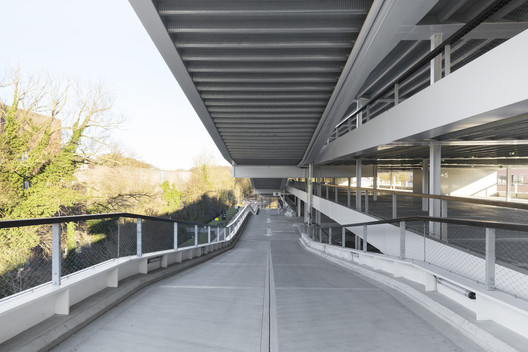 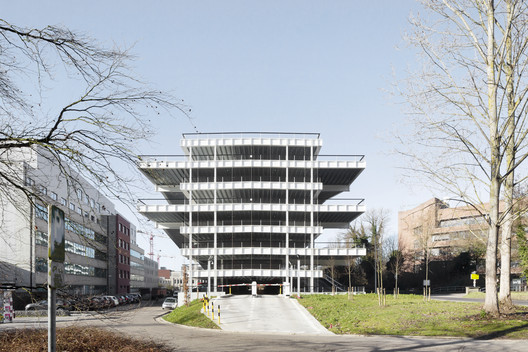