The Obama Foundation has released new renderings and a model of the Obama Presidential Center (OPC) in Chicago. Unveiled as part of the 2019 Obama Foundation Summit, the images feature a range of spaces around the center and in Jackson Park. The images aim to create more ways for the community to engage with the project as part of the city’s South Side.

The Obama Presidential Center will occupy 19.3 acres within the 550-acre Jackson Park. The site is located at the western edge of the park along South Stony Island. The Center’s architectural footprint occupies just over two acres, with structures integrated into and with the surrounding parkscape. The majority of the OPC site will remain open park space for the community.

“We’ve spent the past few years talking with the community and meeting with neighbors and stakeholders to incorporate their input on how the residents of the South Side and the city of Chicago want to experience the Obama Presidential Center in Jackson Park,” said David Simas, CEO of the Obama Foundation. Looking at the site, the Obama Foundation noted that there are several challenges, including the tree health, biodiversity, soil quality, and non-compliance with the City of Chicago stormwater ordinance.

As the team states, the landscape design of the OPC offers an opportunity to address these challenges with sustainability features that include: a one-acre wetland area that will capture and treat stormwater and feature a “Wetland Walk” that threads through the area with seating, a tree canopy, and a place for children to play; the Women’s Garden, which preserves the signature circular form and location of the historic sunken lawn, with a new enlarged perennial garden that captures and treats rainwater encircling the garden, as well as more trees and soil harvesting to allow the site to benefit from soil microbes that exist today.

The OPC campus includes a public plaza and four buildings, three of which are partially embedded into the land. The fourth building, the Museum Building, is designed as a landmark for Chicago’s South Side. The general shape and proportions of the structure were inspired by the form created when four hands come together. The building’s verticality represents the idea of ascension, and the museum galleries have been intentionally stacked to create a smaller footprint in the landscape. The experience culminates in a space known as the Sky Room, which will offer views of the neighboring South Side, Jackson Park, and Chicago’s waterfront. The Sky Room is open to the public and can be accessed without museum admission.

In addition, the Obama Foundation is also releasing details about the Children’s Play Area. This space will feature a large playground with play equipment designed for children of all ages and with input from South Side community members, parents, educators, and families from across Chicago. The design includes lagoon and woodland-themed recreational opportunities, and offers four seasons of play with seating and shade for parents and adults.

News via The Obama Foundation 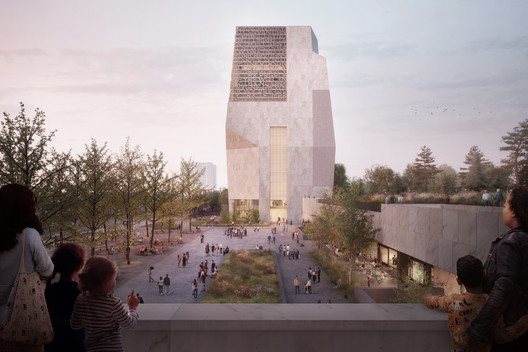