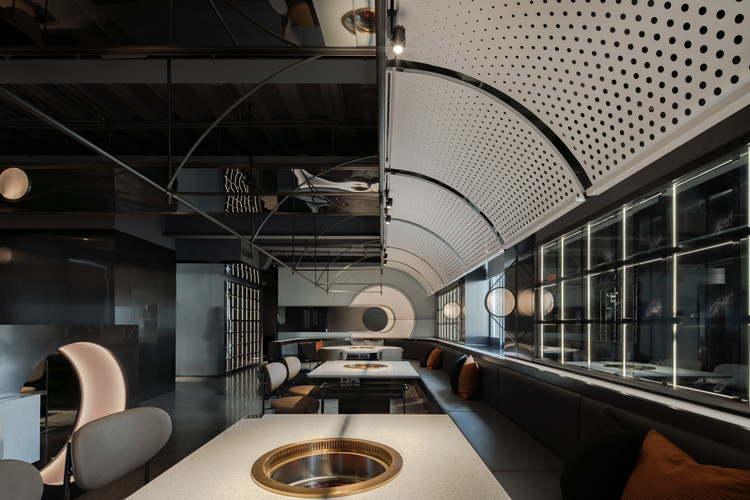 Celestial Bodies Orbit
If celestial bodies are blended into the space background, the eSports is integrated into catering culture, and the thoughts and spirits are hidden behind, it would be not just novelty in the architecture space, but also a presentation of freedom. The celestial phenomenon enriches the space, where the realistic environment is interlaced with celestial orbits, creating a trendy space with rich experience. The space is attractive, not only because it carries the traces of a city’s heritage and history, but also emanates the new era’s freedom and the power of new life.

This project is located at Taikooli business circle in Chengde, next to Chun Xi Road. On the one side standing a century-old business district, a primary location gathering furious competition from a wide range of industry. On the other side we see a new high-end commercial district. Thus, opening a hot pot restaurant adjacent to these two golden locations requires not only its own features compared with many other brands around, but also the needs to face its own realistic problem, which is the location, that the project is on 2nd floor and the space is quite low with a height less than 2.5m. Once the equipment is installed, the space will look even lower. So how to solve this constraint of the project itself and make good use of the resources from this project?

Design Brainstorming
Since the location is closely adjacent to Quantum eSports Square and Skateboarding Square, a community centre full of youth, fashion and energy. Undoubtedly it would be great if we can integrate the surrounding eSports live broadcast to add value to Jiu Li Hot Pot environment. That’s why the designer comes up with a bold idea: Why not put Jiu Li Hot Pot into a game scene with a cosmic space? The orbit of celestial bodies becomes a clue for further brainstorming as well as a creative source of the entire space design.

Wang Hong compares the space to a cosmic game scenario and pulls out an axis through the entire space, giving the chaotic celestial bodies order, and that’s when various celestial phenomena, like sundial, eclipse, comet tail and orbit, start to be generated in the space.

The setting of the context not only establishes the theme, but also works as an effective way to break the original limitation of the space. Mirror stainless steel is applied to the ceiling to stretch the height of the space with mirroring effect, with which the original 2.5m is visually pulled up and the depression problem caused by low space is successfully solved.

With the initial design ideas, the designer conducted experiments to explore and research the possibility of conveying messages effectively using the space, and more importantly, how to naturally blend art, eSports, celestial bodies and orbit into the space, which are the key points of innovation.

Shape, Light and Shadow
Layout design is prone to be symbolized when restrained by the theme. To avoid a figurative space lack of imagination, Wang Hong proposes the theme expression method: to process the space into installation by applying abstract scene to express the space. The combination of shape, light and shadow is applied to achieve both virtual and reality, and the fusion of light in the space also changes by day and night, adjusting the space atmosphere by the subtle tones changes.

In order to match people’s current cognition of celestial bodies, Wang Hong adopts curves to present the round structure of stars. By turning the space into installation, the entire booth area is made into round container like a space capsule. While seated and surrounded by the close environment, customers can have a secure and intimate dining experience provided by the low space.

The designer hopes to break the boundary with changes of lines, light and shadow to outline the self-sustaining of thinking and space, thus to satisfy people’s imagination of the unknow celestial bodies and to materialize people’s attachment to Chengdu hot pot as well as grey tile outside the window.

In terms of the choice of material, Wang Hong uses mesh Titanium to reflect the blurred shadow of stars, which is the origin of comet. Based on human imagination, the lighting devices turn into comet successfully. Light penetrates through galvanized aluminum board and illuminates via its texture paint, giving viewers a soft feeling and creating the sense of “solid” and “dense”. By bringing the void universe back to reality, we give the customers a experience of switching freely between imagining the theme and being in the real environment.

Exceptional Mirrors
Here is the fashion centre of Chengdu, with the Skateboarding Square downstairs and eSports Square on the side. What’s more precious is the grey tile wall outside the window, an unexpected surprise of this project.

The grey tiles outside the window are from the roof of the old theatre. The theatre is the activity place for loyal drama funs, not only for young people, old people also listen to the drama and dine here, enjoying the sensational experience brought by the space. This is the perfect combination of frontier fashion and the nature of the “local” and “Chengdu” feeling provided by Jiu Li Hot Pot.

The designer uses a couple of windows to bring this incredible series of scenes into a real scenario. By doing so, Jiu Li Hot Pot successfully extends its customer group from young people to another group with different age level. Wang Hong says, he just openes a line of windows to achieve a surprising effect. 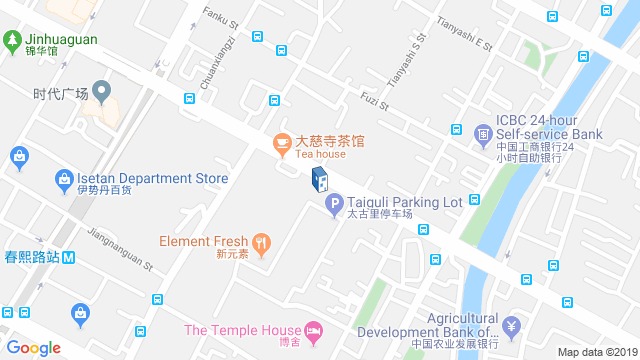 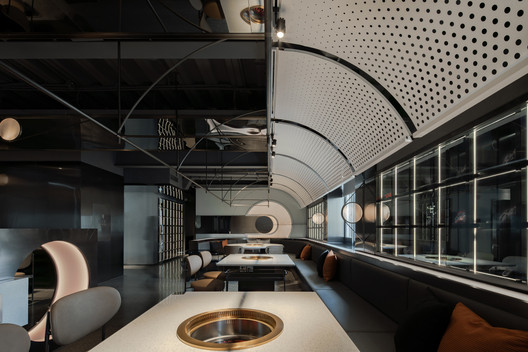