Nike has announced that the latest building in its World Headquarters (WHQ) campus expansion will be named after LeBron James. The new building is designed by Olson Kundig and will be home to Nike’s Beaverton-based Advanced Innovation team. The project will include a state-of-the-art Sport Research Lab and explore the future of sports science.

As Lebron James said, “It’s so surreal,” says James. “It’s been an honor to be a part of such a great company for the last 18 years. And to know that a building with my name will reside on campus — it’s truly an honor, and I feel truly special.” The new Nike Sport Research Lab (NSRL) will be five times the size of the team’s current space, and the project include a full NBA-size basketball court, a 200-meter endurance track, a 100-meter straightaway and an artificial turf training pitch. The design will also feature a waffle pattern concrete slab that is visible under the fourth floor cantilever, where the NSRL will sit. This engineered, structural approach was selected for functional properties, and the waffle pattern is a nod to Nike’s innovation legacy.

A central feature of the design is a 15.63 percent incline ramp, just outside the building, extends more than 500 feet and offers athletes the opportunity for training on a campus without natural hills. Olson Kundig is leading the architecture design in partnership with Mortenson Construction. PLACE, of Portland, is providing landscape architecture services. James’ building is slated to open in 2020. 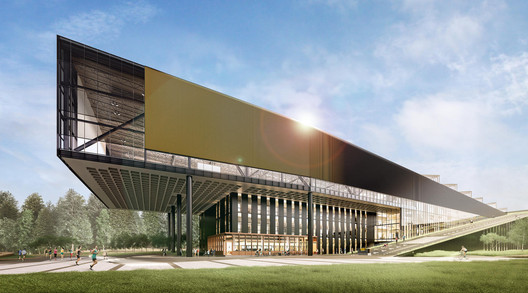