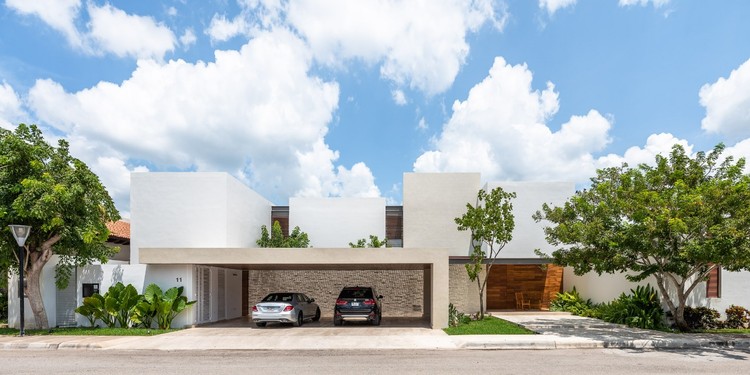 Text description provided by the architects. The succession of blind volumes on the exterior of the building is faithful to our position of "not showing" and enabling the complete understanding and enjoyment of the space only to those who have been granted the confidence to enter the house. The location of the access is due to the pre-existing vegetation, surrounded by it, one reaches a covered hallway with outdoor chairs that remind of the ancient custom of the inhabitants of the city centre of  ¨going outside to chat and watch the night fall¨.

On the opposite side, there is day-to-day entrance passing through the garage. Through here, the circulation leads to the kitchen and opens to a courtyard. This exteror space becomes the visual focal point of several areas, making the routes more enjoyable and injecting light into the house. The house is conceived as a large multifaceted social area. It is made up of interwoven areas that can function independently or as parts that complete a whole. The program is very simple, a double-height space functions as the centre of the project, this social room flows towards both directions, on one side there is the courtyard and on the other, the pool and the garden. It serves as a lobby and articulator for the spaces that coexist around it. The staircase has a leading role in this composition and takes on a sculptural character due to its constructive complexity. The details of the staircase, of this "carpet" that unfold from above and floats above the void and the windows below, consists of "undressing" the structure, leaving its guts visible to explain how it supports itself while it contrasts the visual noise and materials around it.

This circulation has its horizontal counterweight supported by the light line of the bridge that crosses the social area, leading to the rooms that are located at both ends of it. A constant rhythm of wooden elements is repeated in different areas to separate the spaces and to conduct them visually, sometimes as a lattice and at other times in the pergola. The materiality of the stone presents diverse formats and textures, with a cream hue contrasting perfectly with white, steel and wood, giving a contemporary touch, but presenting warmth to the space at the same time. A couture piece, a good gift that reflects the personality of its owner.