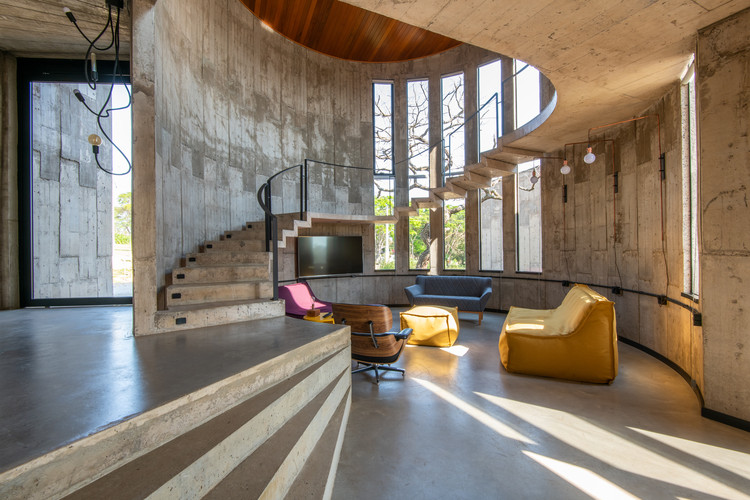 “Sensations. Disruptions that capture our look and produce presence. Inside-out. Curves.” Such initial listening was added to a lake view and to the natural beauty of the Brazilian Cerrado.
That was how the dwelling project began.
On a white sheet, I started the sketches and remembered my studies on the Renaissance and the dazzle caused by Italian sculptures.

An idea met my client’s request: the house evolving around a circular living room and a set of stairs acting as an ascending helicoidal connecting element. Externally, two bulkheads embrace a contorted Cerrado tree leading us to two paths: one to the entrance hall, covered with a roof garden, and the other to the leisure area. With different radii, such bulkheads to the cylindrical body would be blind gables to give perspective through the eye of the beholder and to produce a spiral movement – now in the facade integrating the native vegetation into the new dwelling.

The Brazilian modernist repertoire joined this concept. Even though the Modern Art Week took place nine decades ago, we are still influenced by the clarity of the material exposed in structures and closures, and by the lucidity of the shapes in relation to the internal content. The plasticity of the reinforced concrete establishes a direct connection with the esthetic model conceived, allowing rooms to have a completely open panel to the outside while still keeping elements pure and exposed, with no interference from unnecessary elements. The rusticity of the exposed concrete naturally inserts into the environment around the home, the Brazilian Cerrado.

Project matured and construction method defined.
The same concept was sustainably applied in landscaping maintaining the native esthetic: various colors of Ipês, Buritis, Cagaitas, Cerrado horsetails with their delicate canaliculi and the beauty of Calliandra flowers. This project’s creative freedom triggered a careful look towards the place where the house now stands, towards our esthetic memory and, essentially, towards the subtleness of dwelling.