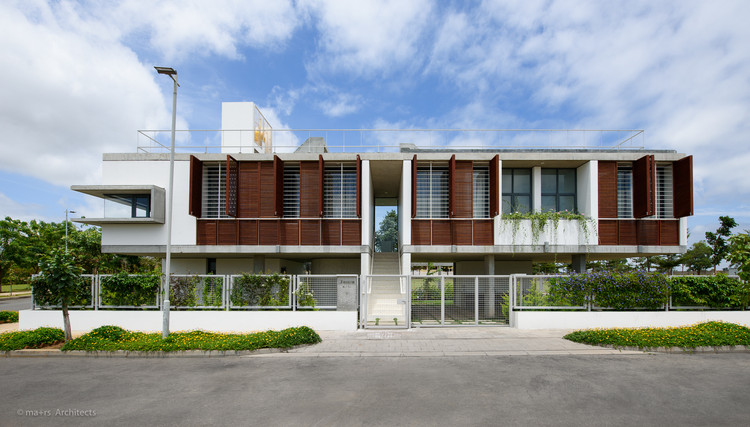 Text description provided by the architects. The weekend getaway home is located in Devanahalli, Bangalore, the northern outskirts of Bangalore, India which is currently sporadically developed. The site is an irregular portion of land measuring 4000 sq. ft, a corner plot flanked by gardens on three sides. Taking advantage of this the built mass is planned as an L abutting the road and forming a garden courtyard inwards. The idea was to feel connected to the sky and the trees and create a living within a garden typology. For which a major chunk of the ground floor has been left unbuilt to give a sense of seamless connection between the garden and greenery all around the site. Thus, lifting the built mass with most of its functions off the ground by 8’-0’ which also enhances the views.

Volumetrically, the main stair is located in the centre of the building (functionally). Thus, dividing the building into two halves separated by a large double height stair with almost blinder like terrazzo walls on either side leaving the user clueless about the expanse of green and stunning views on the other side. The southern portion of the building houses the living, dining, kitchen and master bedroom on the upper floor.

And a quaint low height bedroom on the ground floor flanked by the large garden courtyard on one side and a small private garden tucked on the other which forms organically between the L shape of the built mass and the irregularity of the plot. The northern portion connected to the living on the upper floor by an outdoor corridor/balcony includes two bedrooms and the outdoor dining and party area on the ground floor.

The L shape of the building and the progressively formed garden courtyard enable a space that is open along two of the longer edges making it extremely well-lit and ventilated. The location is characterised by cloudy skies during the latter part of the day and extreme sun during the former. To harvest daylight and keep the interiors cool and private, the façade abutting the road is a double skin of jute and resin composite fixed louvers with openable pivoted shutters on the periphery and toughened glass aluminium sliding windows on the inside.

The building face along the garden however has only toughened glass aluminium sliding windows. The structure is designed with three major supports on the ground floor which are set in from the edge, thus cantilevering the ends of the building making it look like a floating concrete mass amidst a large garden of sorts. The ceiling and slab edges are form finish exposed concrete and the walls (internal & external) have been painted white creating a rather understated offset from the various shades of green all around.