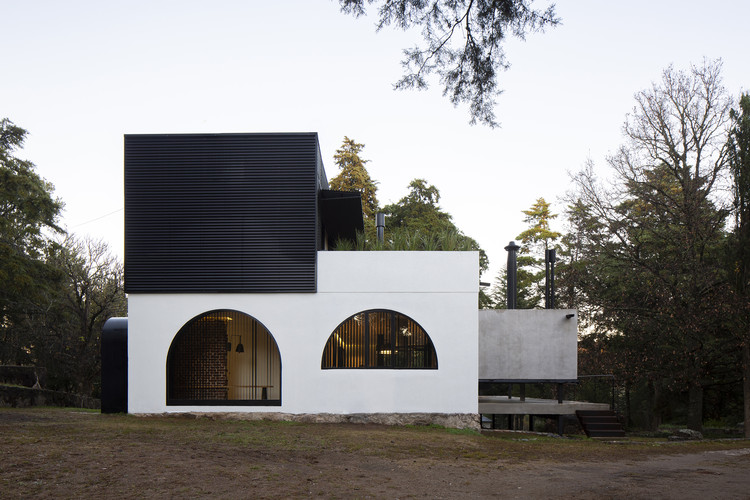 Text description provided by the architects. Located in a 5-hectare farm built in the 40s in Las Sierras de Córdoba, surrounded by a characteristic landscape of the area, Casa Alta Vista was part of a tourist complex of Californian Mission Style, composed of an old inn, a store, a series of workshops and water tanks and the administration building of the complex. The latter is refurbished by its new owners in the search for a weekend home today and a permanent retirement home for tomorrow.

The main thread throughout the entire project has been sustainability. It is visible all the way from the initial decision to preserve the existing construction to support the new one, in the gestures of the project and the choice of the construction system, to the implementation of active energy efficiency systems.

To respond to the new program, we decided to keep the original house, using its shell of bearing walls and rounded arches as structural support and spatial divider of the new space.

Immersed in nature, we search for the sensations produced by the connection between the surroundings and the house itself by bringing the exterior inwards through the perforations in the existing shell. By generating a series of natural scenarios we frame the views from each interior space outwards. Floating on the natural ground and "plugged into the existing core", the gallery is the protagonist of the work. It dives into the surrounding grove becoming part of it.

Achieving a contrast that functions as evidence of a respectful link between the new and the preexisting was another of the design premises. Thus, the arches that were part of the original gallery become part of the interior of the house and together with the existing walls we undressed them from the inside in order to reveal them.

Passive techniques are incorporated into the project to reduce energy consumption: the north-facing gallery creates shade in the summer and allows sunlight to enter on cold winter days. Additionally, gates that serve as enclosures are incorporated on the upper floor. They open as eaves to the north to curb the sun's radiation inward in the summer. The movement of the sun accompanies the use of the interior spaces to optimize the natural lighting of each environment. Finally, the study of natural ventilation makes the staircase work as a solar chimney, expelling the hot air from the interior through its opening at the top, thus forcing the entry of fresh air through the other openings.

For the new construction intervening with the preexisting, we had to choose a lightweight construction system that did not compromise the original structure of the house and which in turn was insulating enough to withstand the low temperatures in the area. In addition, the difficult accessibility of the site had to be taken into account. Finally, we were interested in achieving a respectful dialogue between preexistence and contemporary intervention. As a consequence, we decided to use a galvanized, light steel profile system which was easy to assemble and has good thermal insulation. The outer face is completed with black metal sheets to achieve the integration of the volume with the environment and a contrast with the existing white masonry box.

In addition to the project and construction decisions, active techniques for the generation of alternative energy are incorporated in order to reduce energy consumption and thus increasing the sustainability of the project. 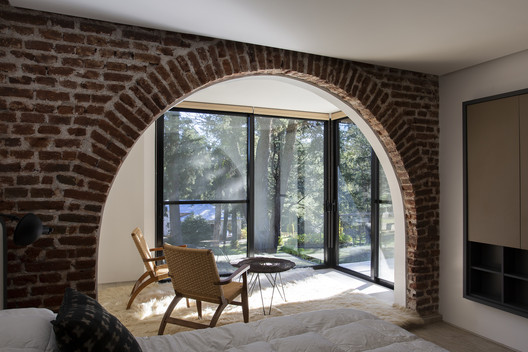