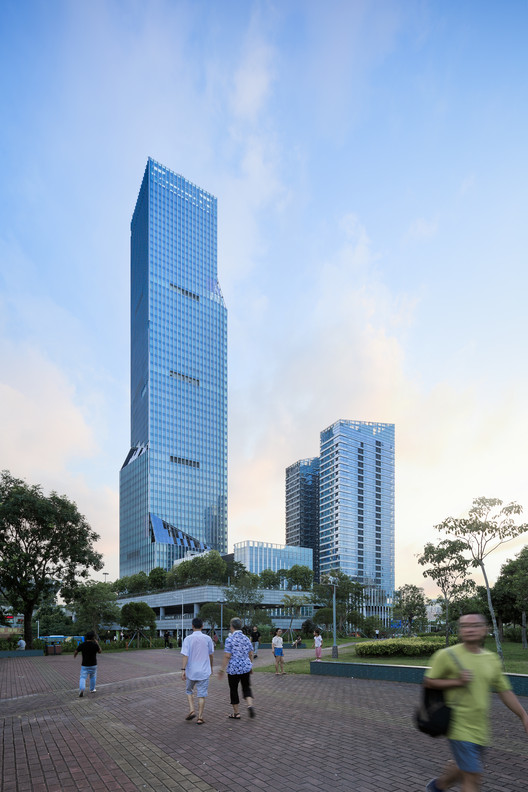 Skyline of Shenzhen North Railway Station - 258m Super High-rise Landmark
Landmarks become more and more important within an ultra-dense metropolis. Height is often adopted in order to improve land utilization, which subsequently creates a lighthouse effect, acting as a beacon within in the maze-like city to guide people. Moreover, such unique super high-rise landmarks will inevitably become the icon of the city, creating a sense of identity and character.

The 258m North Station super high-rise is taking on this important role within the city of Shenzhen.

Overall, the tower has a simple shape, with the efficiency guaranteed by rectangular floor plates. The 11° angle between station yard and Min Tang Road is employed so that the tower gradually rotates from bottom to top by means of stepped terraces. The geometric graduation results in an overall upward movement, akin to a bird breaking out of shell.

Beginning at the ground floor, the size of the tower floor plates shrinks from 2,400m2 to 1,600m2 on the top floor; this gradual reduction occurs in 4 stages, which makes the tower look more slender, and also allows for a distinction between spatial depths at the lower and upper ends of the building. As a result, the Sky Garden is reached grudually by the stepped terraces.

This crown makes refrence to important green areas and landscapes within the city, to which it looks from all directions, from the Yaqi Mountain to the South, the Longhua New District to the North, the Nanshan Mountain to the East and the Changlingpi Reservoir to the West. With their planar cuts, each facade of the tower is formed into an elegant stepped geometry that is unique from different elevations within the Shanzhen urbanity.

Almost all towers in a metropolis rise straight towards the sky, however, the Shenzhen North Station tower is distinct in that it rises elegantly and gradually, bestowing upon it a bold landmark significance within the urban skyline, and forging it into a vital, positive embodiment of the Longhua New District’s future urban development.

Vertical Greening on Tower
The high-quality, angular interior of the Sky Garden, which is covered by green plants, is formed from the culmination of several rotations of the tower’s body. An additional Sky Pool (designed in the Spa area on 45F) beautifies the interior Garden environment. Overall, a vibrant urban balcony is created, adding a distinctive green element to the landmark tower, and marking it with the spirit of the contemporary environment in which it sits.

Commercial Podium
The U-shaped commercial podium encloses the site on 3 sides, to the East, West and North, and leaves the South side open and accessible to the East Plaza. The first floor of the podium is designated as a city square, in which the main site entrance and parking lots are located. Special structures have been included, (e.g. tree-like columns are dotted throughout floors 1-3), which not only satisfy various structural requirements, but also form a unique zone of urban sculptures, improving the quality of urban space and providing the project with a distinct visual character.

Commercial Apartment
The commercial apartment is located on the North-East side of the site and is divided into upper part and lower parts. The atrium is enclosed by the lower part and the podium, while the upper part corresponds to the 258m tower through to the 11° cut.