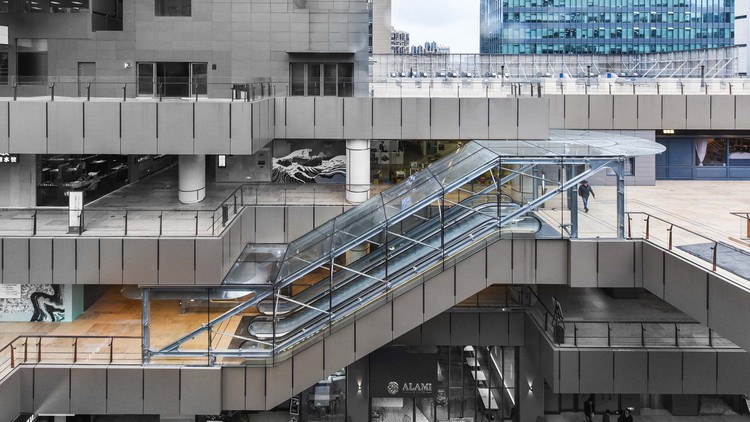 Based on its in-depth research and understanding of Joints, RoarcRenew has highlighted the beauty of joints in this series of works. The following is the description and analysis of Joints Pavilion I - Light Corridor and Joints Pavilion II – Pocket Park in terms of space, forms and structures, joints, construction significance and design logic.

Joints Pavilion I – Lighting Corridor (Hereinafter referred to as JPI)
JPI was the first construction project realized with the “Joints Series”, which was completed in December 2018 in a shopping mall on the west bund of Shanghai. The project is to add steel & glass cover to the escalator originally exposed to the outdoors，which at last formed into a "lighting corridor" space.

- this is a steel structure - point supported glass curtain wall architecture.
- the escalator itself connects the upper and lower floors. The escalator cannot bear the load of steel structure due to maintenance and other reasons, so the steel structure needs to overcome the 12m long span and fall on the overhanging platform.
- steel structural Joints design, to achieve factory prefabrication production, construction site assembly.
- there are five groups of joint zones in the whole steel structure. We try to express the principle of "physics" through the design of nodes, and the articulation of each node is actually to convey the "publicity of force". Physics, on the other hand, is proof that it exists in the real world.
- the glass curtain wall outside the steel structure is actually to convey a "quiet force". The reflection of the glass itself to the surrounding objects is also attached to the "vitreous body". No matter how brilliant the reflection is, it is bound by the geometry of the vitreous in the end.

- we try to express a kind of beauty we think through the "light gallery" : "restrained publicity".
- for the overall steel structure logic, we used 18 sets of triangular figures as the structural logic to stabilize the verticality and resist yaw.
- ritual sense is the ultimate embodiment of "form"; Structure is the biggest "functional" result. Form follows function, and under the further requirements of "aesthetics", it should be: "ritual sense" should not be invented out of thin air, it must be derived from "form construction".
- nodes will not appear alone in the architecture. In fact, the "combination" method of each group of nodes itself is also conveying extremely subtle "restrained publicity".
- The expression of the light comes from the understanding of the material: the whole steel structure is divided into two parts——1. The main steel beam of the lateral truss is carbon structural steel; 2. The articulated joints and molding secondary beams are 304 stainless steel. The selection of lamp sources is divided into three types——narrow angle projection lamp, narrow angle single-line projection lamp (these two parts are only used to illuminate "the process of occlusion" and "the turning of steel"), and LED luminescence film (to enhance the ritual sense of entering the construction).
- the lighting amplifies the exaggeration of nodes, while the curtain wall conceals the publicity of force, balance and opposition.
- the beauty of design comes from a glimpse of order.

Joints Pavilion II – Pocket Park (Hereinafter referred to as JPII)
JPII was the second construction project realized in city space with the “Joints Series”. It is located in a small vacant space along the Fahuazhen Road in Shanghai and sandwiched between two 8level buildings. It is 6m wide and 8m long. Before renovation, the space was stacked with construction and domestic waste. At its far end is the Xianghuaqiao residential community’s activity center. The residents here often have to cross this “rubbish area” to get to the activity center for small talk.

On its two sides are Xianghuaqiao residential buildings, which are multi-level and brick-concrete structures built in the 1990s. The pediments of the two adjacent buildings cannot take any more load in any forms. In this scenario, the construction design plan comes into shape: the concept of joints connection, minimum intervention in street space and the possibility of providing sheltered space.

The form of “canopy” brings out more possibilities to this space. The original design intended to build a sun and rain shade, which makes it a transitional “grey space”that facilitates social activities outside the residential buildings, transforming the dirty and messy “rubbish area” into a formal outdoor activity space for residents. Considering the public nature of the activity center, community bulletin and mini exhibition hall can also be added.

In the design process, we have experimented with more than ten steel-structure canopy installments, but the space still exuded a “caged” feeling. Later, we came up with the idea of using withered trees, for the tree trunk is a work of art from nature and also firm and stable in structural strength. The combination of steel and wood joints will make up for the disadvantages of wooden structures while showcasing the beauty of a “natural form”.

After the plan was finalized, we created a small team to search for the appropriate wood types in adjacent cities and finally we found beech in an abandoned pile of firewood in a forest farm in Nantong, Jiangsu province. With sound impact resistance ability, beech is firm and solid,, which bends easily when steamed, and it is ideal for model shapes. It can also holds nails firmly. With such propensities, it has been used widely in home furniture making since the Ming(1368 – 1644) and Qing(1644 – 1911) Dynasty. At last, we scavenged 16 beech trunks from this pile of abandoned firewood-to-be beech. They have appropriate crotch and small branches, with diameters at breast height at around 10cm. The blueprint in our mind for this small vacant space is a construction filled with “energy and vitality”. These withered trees can extend their service life and contribute more to the society.

Connected by steel ropes, the wooden structure is placed in a steel support fastened in the ground. The top of the wooden structure is embedded with three-face steel plate connecting the canopy unit, with the head and tail tightened by an X-shape steel rope. The whole structure is composed of three faces of canopies. When opened fully, they will fill the construction with a clean and pure aura, spreading out to the , plane, lines and points formed by cloth, wood and steel. Every joint at the construction’s top can be used to hang steel rope, turning the space into a “mini exhibition hall” for the community and a “mini living room” for the city.

Joints Pavilion stands for the values we are sticking to: each small detail counts and decides the quality of the big construction. All the functional transformations are actually decided by the small joints, and that’s where the glamour of architecture lies and also the manifestation of “modules” in architecture. Based on the small joints, a room is built, a structure is established, a form comes into being and finally the values realized. 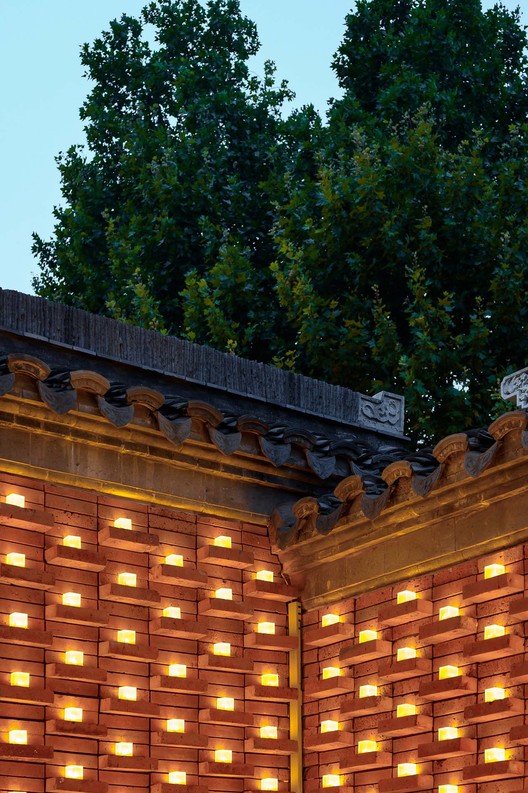 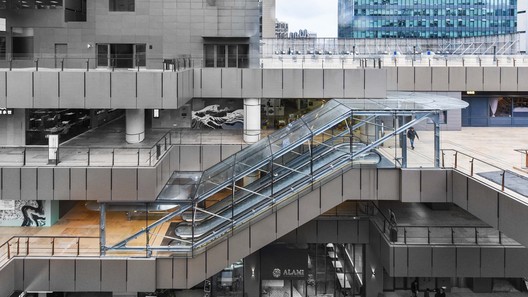