Save
Junya Ishigami: “Innovation Comes From Each One of Us”
Share
Or
Copy

Junya Ishigami is one of the most outstanding young Japanese architects of present time and he has obtained recognition due to his experimental approach of the project development. Sensitive to the specific local features, Ishigami puts, at the heart of the debate, key architectural issues that sometimes might be abandoned in the daily practice. Time, tension and freedom are concepts that are always present in his production somehow, becoming more visible in most of his recent works.

Invited by the Japan House São Paulo, Ishigami came to Brazil to discuss the role of the cultural institutions nowadays with Martim Corullon from Metro Arquitetos, an event that has occurred on last September 2nd. With the mediation of Japan House itself, we talked to the architect about the role of architecture today, his experimental practice and the singularity of designing in Japan and Brazil.

ArchDaily: On yesterday’s lecture, you have talked a little bit about the modernism and the contemporaneity. Our cities are no longer the modern cities, they have changed a lot and, with them, the challenges as well. How do you see the architect’s role in the contemporary world?

Junya Ishigami: I understand that, in the 20th century, the modernism established itself mostly through this equality of building the city as architecture. Currently, I think that architecture needs a scale bigger than just a city, a scale close to nature as the planet Earth itself. I believe that this is our role in contemporary society: to broad the architecture to the planet’s scale.

AD: You usually mention the need of freedom in architecture and a kind of absence of the complete control over the project. Could you talk more about it?

JI: Architecture is like a creation, an expression of the diversity of values. As such, I believe that we need to represent and express as much as possible of the different world perspectives and the architect’s job is to make that representation. In functionalism, the term “create” carries the idea of “solution”; in my opinion, we need to overcome this conception and, for that, we need some elements that we cannot control.

AD: Your production is very experimental and the buildings, often, reveal some kind of tension, both physical and conceptual. Could you talk more about the project process and this relationship with the experimental aspect?

JI: The physical tension you mention is…

AD: For example, in the project of the installation of that extremely thin steel table or, yet, in the conceptual tension of the project House & Restaurant Noel, where that heavy solid concrete structure supports itself in few support points.

JI: Regarding the experimental issue, initially, in architecture, there is not a same answer among the architects, because each one is going to build in a different area, with a different client, so each project has some of this experimental matter. And answering as an architect, instead of presenting a single answer or an initial point, I seek to integrate a lot of shapes and different perspectives. Therefore, I can put something very heavy sustained by something very thin or, on the other hand, I can talk about the contemporary and, at the same time, give the impression of something historical. Thus, by seeking to incorporate many variables in a work, naturally, a contradiction, or the tension you have mentioned, arises.

AD: You have mentioned here and in other interviews the significance of the client, the land and the specific local conditions. Could you talk more about the importance of the client in your projects?

AD: A lot of your works deal with the time issue. Some buildings arises with an older aspect already, nearly eroded, like, for example, the House & Restaurant Noel. I would like if you could talk more about time and its importance for your architecture.

JI: I believe that every building that has been built needs to stand there for as much time as possible. And, as long as this building exists, naturally, it will be worn. Therefore, I have this need to show the way that a building deteriorates itself. In my opinion, society changes and architecture reflects this, but, nowadays, the society has changed very quickly. So far, the society changes and the architecture’s permanence happened in a similar range. Since today the society has changed in a quick way, I seek to adjust the architecture to keep up with this change.

JI: My background as a person and an architect is Japanese. Brazil, in turn, has its own local and regional values. Therefore, this freedom is possible through the way you draw parallels between your context and the values inherent to it, as they are historical or specific from each space of the world you are going to work on it. Before, in the modernism, the innovation was something that came from outside and you had to adjust to become part of this context of novelty. Nowadays, it is the opposite: the innovation comes from each one of us and the question is how we can affect our context to improve it. 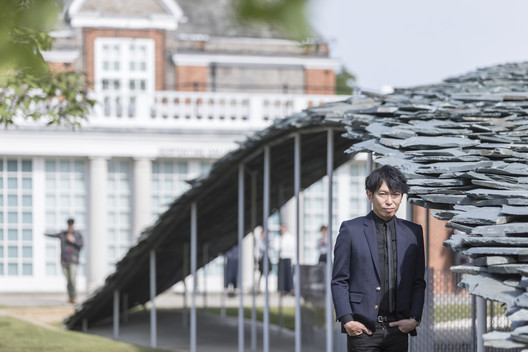