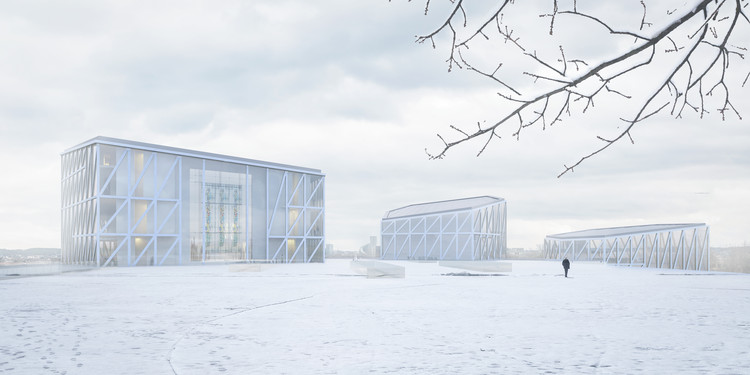 The international jury, headed by Norwegian architect Ole Gustavsen (Jury Chair and UIA representative), commended the winning entry by Arquivio Architects (Spain). Jury members noted that “the design of the three volumes and the new plaza provides a clear and fitting intermediate level of detail between the city and the interior spaces.” The jury added that the winning entry had proposed a solution ensuring functional communications and acoustic solutions that would satisfy the requirements for an open, multifunctional art centre, featuring a premium classical music concert hall with natural acoustics in which the residing orchestra would feel at home.

Second prize was awarded to Fres architects and planners Laurent Gravier+Sara Martin Camara, France, while UAB PALEKO ARCHSTUDIJA, Lithuania, was awarded third prize. The jury also gave an honourable mention to Smar Architecture Studio, Australia. The top three winners attended the award ceremony in Vilnius and received prizes of €60,000; €40,000 and €20,000 respectively. Speaking at the award ceremony, Mindaugas Kvietkauskas, the Minister of Culture for the Republic of Lithuania, congratulated the winners, adding that he would very much like to see the National Concert Hall as an “inviting place, open to everyone, a place of harmony for people of different generations, views and tastes, bringing together Lithuanian citizens into a single creative space where we could create our own Home of Nation together.”

All 248 architectural ideas for the National Concert Hall will be displayed in Vilnius from 20 September to 13 October. Construction of the building is set to start in 2021.View all the winning entries here.