Save
Sustainability in Space: What California Green Building Standards and the Von Braun Space Station Have in Common
Share
Or
Copy

As California makes strides in sustainability, the Von Braun Space Station is taking rather large steps for humankind. Exploring the great unknown does not have to mean abandoning our planet — it can mean just the opposite. In fact, this space station could be our most monumental step toward a sustainable future.

Pioneered by the Gateway Foundation, the project is named after the father of American space flight, rocket scientist and space architect Wernher von Braun who popularized the rotating space station concept. Picture the setting from 2001: A Space Odyssey but unlike the cold-feeling contemporary interiors from the film, the Von Braun is designed to feel like home — a hotel for tourists and a research area for scientists — equipped with bedrooms, bars and restaurants brought down to earth (in a sense) by artificial gravity and natural materials.

Senior design architect for this astronomical endeavor is Tim Alatorre. The name of his Sacramento based firm, Domum, means “coming home” in Latin. After all, coming home is a universal feeling.

“Just like many terrestrial projects, our goal on the Von Braun is to help you feel at home,” Alatorre says.

By 2025, one hundred fifty passengers will experience a completely sustainable lifestyle in space — powerful inspiration for how we can save our home from the impending climate crisis.

Responding to this vital need, The California Green Building Standards Code became law in 2009. The Standards require sustainable construction practices for energy, water and material efficiency among other green initiatives growing with each code cycle.

To refine sustainable design in our ever-changing environments, Alatorre expands upon California’s building philosophy within the realm of “space architecture,” exploring sustainability for the state’s homes and businesses … and beyond.

How designing (outer) spaces can enrich our Earth-bound cities

Space architecture can take sustainability to the extreme. The Von Braun’s furniture will be made in orbit with 3D printers, and those plastics can always be melted back into filament and used again.

At its essence, space architecture explores ways to reuse and recycle. Every kilogram that goes into orbit comes at a significant cost. So sustainability is critical. While architects are confined by certain boundaries on Earth, space architects get even more creative out of necessity. Here, many pour water down the drain and don’t bat an eye. In space, every ounce of water gets purified and reused. Toilet water can be purified and then cycled to be flushed again or used as a ballast system to balance the ship — or to make fuel to power the rockets.

Sounds like something out of a sci-fi movie at first glance, but think about all the commonplace tools we use today. The GPS and the microchip started out in space and became integral parts of our lives, seemingly at the speed of light.

“The possibilities are out of this world,” Alatorre says. “Our goal is to take lessons learned in space and then bring them back down to Earth.”

Even as the space station is being designed, architectural advances are tackling climate change and California is taking a leading role.

Starting in 2020, new residences must be built with on-site energy generation. Past decisions forecast that within a decade, commercial buildings will likely follow suit. The architecture community can lead the way for environmental stewardship.

Alatorre adds, “Over the next five years the cost savings of the solar panels on my home will have paid for itself … from then on, free power.”

Space architects also consider how to create indoor-outdoor connection. The ever-important “sense of arrival,” as explored for a custom home or commercial structure, applies in this setting as well. How do you arrive? What will the first experience feel like?

Journeying from Earth to the Von Braun, each passenger’s awareness will be heightened. In the Lunar Gravity Area, two concentric rotating rings will create the gravitational force of the surface of the moon. The outer habitation ring is for tourists to vacation and, in the future, buy real estate.

“Two weeks in the Heavens could be paradise, but only if it’s well designed,” Alatorre says. “Like a carpet pulled from under you, space architecture replaces your day-to-day with an alternate reality.”

On Earth, the sun rises in the morning and sets at night. While on the station, our planet will seem to rotate around the window once every 45 seconds, sunlight will be constant, and the floors will curve.

Window design is essential to how inhabitants experience this phenomenon. Indoor-outdoor connections on Earth may be achieved through large window panes, yet the Von Braun team considers the psychological need for transition in an unfamiliar environment so that travelers feel free to draw the curtains.

How space architecture is reaching new heights for sustainability

Reaching outward and inward, the design seeks to both intrigue those on board and bring them comfort and security. Curved walls and floors will highlight the sensation of alternative gravity, while cork flooring provides a sense of grounding, also avoiding the expense of hauling heavy lumber into space.

A more practical factor is air quality. On Earth, we take air for granted. For the space station, the team is finding answers to crucial questions: How do we get the air here and control it? How much fresh air do humans need to feel healthy? Like water, no air will be wasted.

The Sick Building Syndrome is one the Gateway Foundation wants to avoid in this new territory, following in the footsteps of NASA which has only approved certain materials that have a minimum level of off-gassing. Where there’s reduced gravity, floating particles could damage electronics and potentially risk people’s safety.

So to gift Von Braun passengers security and spectacle, this careful consideration of lines and materials balances the feelings of space and earth, of new and old, of there and home.

Projected Start and Completion Dates: Start construction by 2021. Have station fully occupied by 2025. 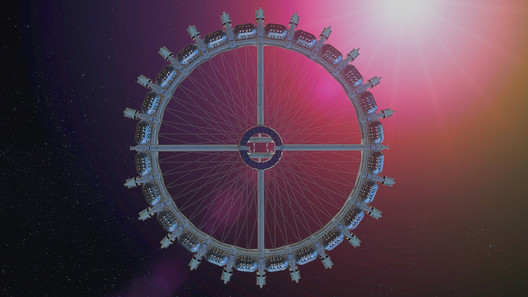