The Truman Show is a 1998 dramedy starring Jim Carrey as Truman Burbank, the unwitting star of a 24-hour reality show that began at his birth. Set in Seahaven, a city-scale television studio designed to covertly record Truman's entire life, the show attempts to divert Truman from any potential suspicion that every single person he meets is an actor or actress.

In the movie, Seahaven is a beautiful, race-diverse, middle-scale, low-density coastal city/set. A sense of its artificiality is noticeable at the outset, and non-American viewers especially might discern that Truman’s birthplace is an homage to the many movies recorded in suburban United States during the 1980's and 1990's, including E.T. (1982), Ferris Bueller's Day Off (1986) and Home Alone (1990). However, Seahaven's perfect life may not have been as noticeably suspicious to American viewers since suburbs were (and still are) idealized by many, seen as urban expressions that balanced the city’s opportunities with nature’s virtues through a (vaguely) traditional architectural style and a strong community life.

This latter conception of the American suburb is grounded in truth: most of the outdoor scenes set in Seahaven were recorded in Seaside, Florida, the design and construction of which inspired New Urbanism. A sentimental utopian movement of the 1980's, New Urbanism was predicated on the belief that “greater sociability could be engineered through a particular set of physical arrangements and design aesthetics,'' as described by Alex Krieger, Professor in Practice of Urban Design at the Harvard Graduate School of Design, in his forthcoming book City on a Hill: Urban Idealism in America from the Puritans to the Present, published by Harvard University Press.

City on a Hill takes us on a bold, comprehensive journey through the history of American city planning — or rather a history of the American built environment, due to the anti-urban bias that has historically been pinned to American culture.

Krieger states that utopian visions have historically shaped American cities due to a constant and insatiable need to experiment with organizing society according to economic, political, social, religious, commercial, and even ecological visions. According to the author, utopian dreams can be found in Puritans seeking New Jerusalem, Thomas Jefferson’s agrarian republic, suburban responses to chaotic and polluted cities, landscapers' calls to bring nature back to the cities, the hyper-horizontal and anti-urban layout defined by the arrival and mass production of the car, and even contemporary smart cities.

While explaining urban idealism, Krieger simultaneously generates a history of the country itself and exposes the philosophical debate that the United States has had to face since its foundation: the tug of war between civilization and nature as the United States endeavored to become the most powerful country of the world. This tug of war is expressed sometimes around the idea of destiny (United States’ narrative about its foundation, continental expansionism, and economic development) and sometimes around the idea of threat (warnings about decreasing quality of life and increasing social inequity, idealizing nature as a source of virtue, etc.). It's not surprising at all that American presidential speeches when announcing foreign interventions resembled journalist John Louis O’Sullivan’s 1854 claim of “the right of our manifest destiny to overspread and to possess the whole of the continent which Providence has given us for the development of the great experiment of liberty and federated self-government entrusted to us.”

Krieger is more interested in identifying the context in which these utopias emerged than judging the glories and failures of previous dreams. Criticizing the deep-rooted vehicle-dependence of American cities gains new weight if we first realize that a horseless age initially promised a cleaner urban environment; our understanding of the field of landscape architecture similarly changes with the knowledge that early landscapers such as Frederick Law Olmsted considered bringing nature back to the city a method of social reform.

One of the most interesting points in the book is that the biggest issues of our cities remain nearly the same — wealth inequality, the role of the government in the market, the ecological consequences of economic development, and global narratives. Krieger recalls that the American Romantics of the first half of the nineteenth century were already concerned with the appreciation of nature, rejecting materialism and utilitarianism when confronted with the consequences of the industrial revolution. Today, Thomas Cole’s allegorical work The Course of Empire (1833–1836), a set of paintings that aimed to warn society of the dire environmental consequences of urban development, seems to be trendier than ever.

In a time where the future looks darker than ever, Alex Krieger reminds us of how utopian dreams once galvanized American (city planning) history, and shows that our current worries — rather than dreams — require new utopias to be imagined.

City on a Hill: Urban Idealism in America from the Puritans to the Present, published by Harvard University Press, is out now. 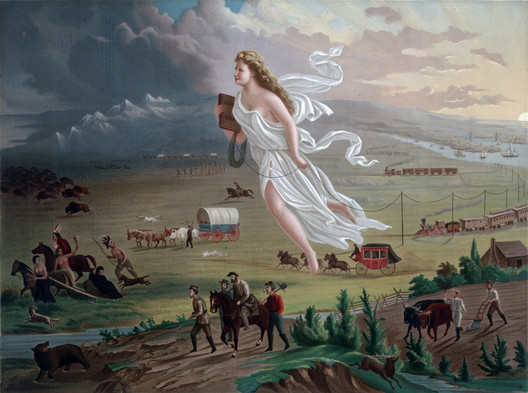